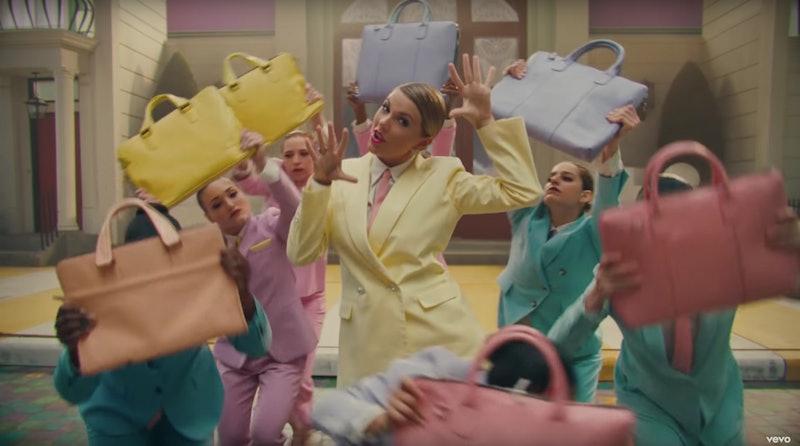 The hype surrounding the debut of Taylor Swift's new single "ME!" has been building for what has likely felt like an eternity for fans of the singer. And now that the song has finally been released, tweets and memes about "ME!" prove just how much Swift's followers adore the self-love anthem and the powerful message behind it. On Friday, April 26, Swift dropped the first song from her highly-anticipated seventh studio album and it seems that the entire Twitterverse and beyond just can't get enough of the collaboration featuring Panic At The Disco! frontman Brendon Urie. The track, which sends a message to fans about self-acceptance and self-love, has already been met with great reception, amassing 23 million views on YouTube in just 10 hours.

Just before it's release at midnight on Friday, Swift spoke to Good Morning America's Robin Roberts at the NFL Draft, revealing the song's title and meaning. "'ME!' is a song about embracing your individuality and really celebrating it and owning it," she explained. "I think that with a pop song we have the ability to get a melody stuck in people's heads, and I just want it to be one that makes them feel better about themselves, not worse."

If social media is any indication, Swift's plan to create a feel-good anthem for all to enjoy has worked. Her new mantra spread like wildfire throughout Twitter on Friday morning with many showing up in droves to rave about Swift and her new song.

One fan thinks Taylor's love for herself is totally "awesome."

Swift's new song makes this listener want to dance every time it comes on.

Another fan can't contain their excitement over Swift's latest release.

Someone pointed out similarities between the colorful dance sequence in Swift's new video and a musical episode of How I Met Your Mother.

This Twitter fan said that they've played the song so much that even their cats know the lyrics. (Swift's cats probably do too.)

This fan joked about the way Swift offered a scholastic message midway through the tune's pastel-themed visual.

One Swiftie admitted that with the release of this new song, much of their bank account pretty much belongs to the singer.

The song has been on repeat for this fan ever since it dropped early Friday morning.

Now that this fan is working from home, it's safe to say that they'll be listening to Swift's new song for the entire day.

One fan has no time for anything except the positivity of Swift's new bop.

Another commenter is totally on board with the latest chapter in Swift's amazing career, and very excited for the new album to come.

With the overwhelming positive message it's been receiving from fans on Twitter, there's certainly no doubt that "ME!" is going to be one of the top songs on everybody's playlist this summer.

More like this
Taylor Swift Fans Sue Ticketmaster For The Eras Tour “Ticket Sale Disaster”
By Jake Viswanath
A Taylor Swift Documentary About The Ticketmaster Fiasco Is Streaming Now
By Grace Wehniainen
The 'Love, Lizzo' Harry Styles Scene Is Just 1 Moment That Made Fans Feel Seen
By Brad Witter
'Wakanda Forever' Is Already Opening Doors For Mabel Cadena
By Grace Wehniainen
Get Even More From Bustle — Sign Up For The Newsletter