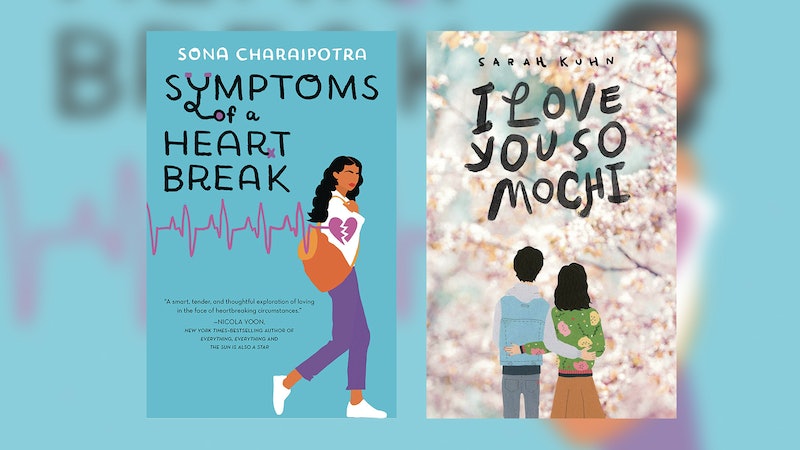 If you watched To All the Boys I’ve Loved Before and The Sun is Also a Star and are now in need of more sweet romantic comedies that will make you feel gooey inside, then you’re in luck: A plethora of amazing new young adult rom-com novels are out this summer, and they are sure to get your heart fluttering — especially Symptoms of a Heartbreak by Sona Charaipotra and I Love You So Mochi by Sarah Kuhn, two delightful romances that are quietly revolutionary in their portrayal of young women of color.

Contemporary romantic comedies are nothing new in young adult fiction. When done well, they capture the emotional firestorm of being a teenager in the throes of first love and the intense coming of age that's typical of young adulthood. In their respective novels, Charaipotra and Kuhn expertly portray the multitude of opposites and tumultuous sea of emotions that define the teenage experience.

"Most of what I write revolves around Asian Girls Having Fun. I feel like that’s really important to show: Joyful stories where we get to experience our own larger than life hijinks and adventures and fall in love and be adored," Sarah Kuhn tells Bustle. "So [YA rom-coms] seemed like a genre where I could really dig into the hijinks and the fun and the love — and to finally center a girl who looks like me."

In I Love You So Mochi, Japanese American teenager Kimi Nakamura visits her estranged grandparents in Japan the summer before college. There, she meets Akira, who works at his uncle’s mochi stand, and confides in him about her uncertain future: She has been accepted to art school, fulfilling her mother’s dreams, but she isn’t sure that’s where her passion lies.

'I Love You So Mochi' by Sarah Kuhn

The main character of Symptoms of a Heartbreak, Saira Sehgal, seems to have fewer questions about her future than Kimi. After all, at 16 years old, she’s starting her medical residency in pediatric oncology. Hailed as a child prodigy, Saira has a lot of pressure on her shoulders, and even the doctors she’s working with don’t think she’s at their level. And the cute cancer patient she meets on her first day isn’t making things any easier for her.

"I wanted to do something that was — is — still too rare: Show POC kids in love."

These two characters seem very different, but they have so much in common: They are both young women trying to figure out who they are and working to become who they want to be. They’re both drowning under other people’s — and their own — expectations. And they are both young women of color trying to find a place in a world that judges and categorizes them based on the hue of their skin.

That last tidbit is what makes books like Symptoms of a Heartbreak and I Love You So Mochi so important. Too often, the stories of girls and boys of color are ones of pain and struggle. “We need the stories that share our pain and our hurt, those experiences are valid and we need to be able to tell them,” Sona Charaipotra tells Bustle. “But I think our joy gets neglected. Often purposefully ignored.”

'Symptoms of a Heartbreak' by Sona Charaipotra

That is what is so key about these books, and why novels like them — such as Sandhya Menon’s When Dimple Met Rishi and I Believe in a Thing Called Love by Maureen Goo — are not nearly as straightforward as they seem. They are, in fact, quietly revolutionary.

"I wanted to do something that was — is — still too rare: Show POC kids in love," Charaipotra says. "To show how who they are and where they come from informs that experience. The cultural elements, where and how they grew up, how they live in this world." Symptoms of a Heartbreak, she says, was the chance to see herself — and for Indian American kids to see themselves — as the hero of a story that wasn’t one about pain.

"I cannot tell you how many times I have been called ‘niche.’ It’s like code for 'not white.'"

"My mom read the book, and she said she loved it because she recognized so much of us in it," Charaipotra says. "That’s what I wanted to do. And hearing from other people that they feel like I’ve managed to reflect them too has been so amazing, it makes me weepy.”

While stories featuring white characters are seen as universal, stories featuring characters of any sort of marginalized background are treated as a smaller story, as if only people of that specific culture, race, or identity can understand it. "It’s interesting, though, because it’s true that stories starring POC — no matter how universal they are — still get called 'niche,'" Kuhn says. "I cannot tell you how many times I have been called ‘niche.’ It’s like code for ‘not white.’ I’m very proud of the fact that I write stories about joyful Asian American girls and I do mention that every chance I get."

But now, with the success of films like Crazy Rich Asians, Always Be My Maybe, and more, it’s hard to deny that there’s a hunger for stories that feature diverse main characters in happier settings. But it’s not just the market that has affected this sea change of inclusive stories in YA. Sona Charaipotra has been a part of the movement herself, with CAKE Literary, the book development company she co-owns with fellow YA author Dhonielle Clayton. “[We] made it a mission is to celebrate our joy, to let kids from the margins come to the center, get to be the hero of the story,” Charaipotra says. “And that includes love stories.”

It’s impossible to talk about inclusivity in children’s literature without discussing the nonprofit organization We Need Diverse Books, which advocates for "literature that reflects and honors the lives of all young people." Kuhn says that “the impact of We Need Diverse Books has been huge — that organization raised so much awareness and has shown so much support for POC authors who maybe used to feel kind of alone, isolated. I think people — both writers and readers — feel more comfortable speaking up now, holding publishing accountable and saying, hey, this is really not how our modern world looks. An all-white story, all-white protagonists, that doesn’t reflect the world we live in. I feel like it’s still an uphill battle, but I love seeing these stories getting out into the world in a bigger way."

"It’s important to be able to see ourselves as girls who are centered in the story, getting to experience joy and happily ever after."

The rise in Asian American romantic comedies in young adult fiction could perhaps be tied to Jenny Han, whose hit novel To All the Boys I’ve Loved Before was recently turned into a movie on Netflix. Both Kuhn and Charaipotra count themselves among her fans. “I adore Jenny’s work, just adore it,” Kuhn says. “Watching her shine so bright in the rom com world has been really inspirational to me — I always say that if you never see something, you don’t know it’s possible. I think just seeing her as an Asian American woman out there writing Asian American girl rom-coms is so important, because it shows you that it’s possible to do that, to be that.”

"I think the universal lies in the specifics — in the way people show love and affection, in the way expectations are set, in the way families and communities function."

That, at its crux, is why telling these kinds of stories is important, and why books like Symptoms of a Heartbreak and I Love You So Mochi are changing young adult literature. “Growing up, I never saw myself as a rom-com heroine or a superheroine or anything more than maybe the fun friend who gives the white heroine some kind of essential life advice,” Kuhn says. “It’s important to be able to see ourselves as girls who are centered in the story, getting to experience joy and happily ever after." Just as Jenny Han’s success set an example for Asian American authors, books like these two show Asian American teens that they can be — in fact, they have the right to be — the center of a story.

These books represent a huge change in the way the U.S. is thinking about and treating stories by and about Asians. People are realizing that characters of color can, in fact, represent a universal experience. "I think the universal lies in the specifics — in the way people show love and affection, in the way expectations are set, in the way families and communities function," Charaipotra says. “Those elements define how we interact with the world. Those elements create the emotional truths of the character. And the emotional truths — love, loss, pain, joy, uncertainty, security — I think, are what resonate universally. So essentially: the universal comes from the specific.”

Kuhn agrees: "I think the best stories always have that sense of super specificity — that story only you can tell — but many people can connect to the underlying emotional themes." And with this universality comes crucial representation for teenagers of color. Thanks to authors like Sarah Kuhn and Sona Charaipotra, Asian American girls get to see themselves as the center of stories of joy, triumph, and love.