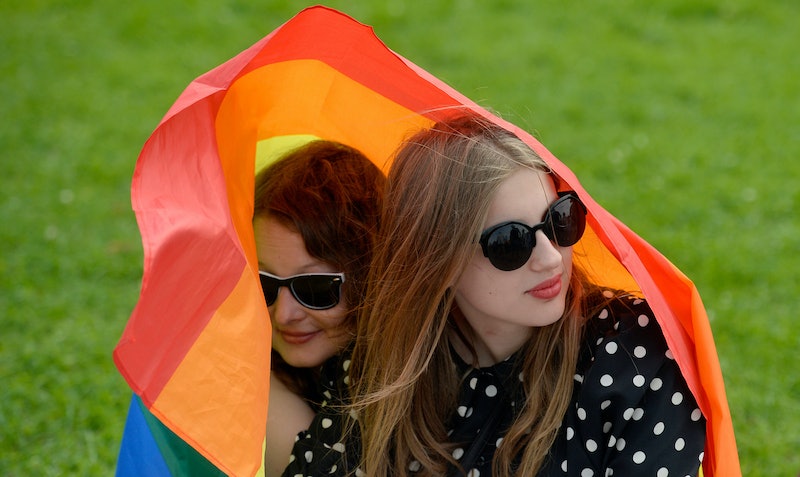 One of the reasons I recently left my home state of Missouri to try to make a home out in Los Angeles is because I'm a bisexual feminist who hasn't always felt safe being herself. In fact, my main goal right now is to put down roots somewhere progressive. Considering the current state of our nation's political climate, I know I'm not the only queer person who feels this way: Last week, I read Frank Bruni's New York Times piece, “The Worst (And Best) Places to Be Gay In America,” and I haven't been able to stop thinking about it since. As Bruni says, "If the Trump administration won’t protect gay people, we’re at the mercy of our ZIP codes." Even though same-sex marriage has been federally legal in the United States for over two years now, that doesn’t mean the U.S. government, or even the American people as a whole, are all that queer-friendly.

Legalizing same-sex marriage was definitely a colossal step forward in the fight for LGBTQ rights, but the struggle is far from over. In fact, LGBTQ rights have been under attack lately. Last May, Alabama Governor Kay Ivy signed legislation to protect faith-based adoption organizations that refuse to place children with gay parents — and Texas followed suit shortly after that. Just last week, Trump ordered the U.S. military to stop accepting transgender men and women as recruits. As if that’s not upsetting enough, there are currently 20 states that don’t have hate crime laws specifically protecting LGBTQ individuals.

Fortunately, it’s not all bad for LGBTQ people in America. From sea to shining sea, there are cities and even entire states where LGBTQ folks and their families are welcomed and protected. Unfortunately, it feels like life under the Trump administration is making it more important than ever to know where it's safe to be queer in the United States. Read on to learn more about the best and worst cities to be LGBTQ in America.

As Fast Company reported back in 2016, only 19 states and Washington D.C. have passed laws to protect LGBTQ employees from being discriminated against by their employers. In those states, which include Washington and Oregon, employees cannot be discriminated against based on sexual orientation or gender identity. Three other states, including New York, have laws that protect employees from discrimination on the basis of sexual orientation — but not gender identity. In 26 states, including my home state of Missouri, there are absolutely no statewide protections for working LGBTQ people. Even worse, states like Tennessee and Arkansas have actually banned local LGBTQ protections within their more progressive cities, like Little Rock.

California, on the other hand, takes discrimination against working LGBTQ folks so seriously that it recently banned government-funded travel to states it deems dangerously discriminatory. And speaking of...

Despite a 2016 federal ruling in which U.S. District Judge Daniel Jordan declared it unconstitutional to prevent same-sex couples from adopting, a whopping 33 states don't have laws allowing a second same-sex parent to adopt. And in Texas and Alabama, taxpayer-funded adoption agencies and child welfare agencies can legally deny the placement of children in homes with gay parents. Going the biological route isn't always an option for prospective LGBTQ parents in America, either. Seven states, including New York, have laws that prohibit gestational surrogacy.

Fortunately, the Human Rights Campaign reports that more and more birth parents are actively choosing same-sex couples over different-sex couples. Also, LGBTQ-friendly adoption agencies exist all over the country. From Burlington, Kentucky to Colorado Springs, Colorado, there are agencies where hopeful LGBTQ parents and families are welcomed and supported.

According to a study conducted by San Francisco State University, LGBTQ children who were "rejected" by their families and/or underwent gay conversion therapy were three times as likely to be at high risk for HIV and STIs, and eight times as likely to commit suicide. Still, there are currently 41 states that don't have any statewide laws protecting LGBTQ youth from gay conversion therapy, and Vice President Mike Pence has actively supported the practice throughout his political career. This is despite the fact that gay conversion therapy — sometimes referred to as “sexual orientation change efforts” or “reparative therapy" — has been condemned as both highly ineffective and incredibly dangerous by the American Psychiatric Association, the American Psychological Association, and the American Medical Association.

The good news is that Connecticut, California, Nevada, New Jersey, the District of Columbia, Oregon, Illinois, Vermont, New York, New Mexico, and Rhode Island have banned gay conversion therapy for minors. Equally encouraging, some traditionally more conservative states, like Ohio and Florida, have banned the abusive practice in many of their more gay-friendly cities. Just last week, the people of Athens, Ohio, joined Cincinnati, Columbus, Toledo, and Dayton when they voted to protect their city's LGBTQ youth from conversion therapy.

Additionally, in places like Grass Lake, Michigan, schoolchildren are encouraged to use the bathroom that matches their gender identity. A couple states south of there, in Kansas City, Missouri, there are multiple resources and safe spaces specifically designed with the wellbeing of trans kids in mind.

For LGBTQ Folks Who Don't Want To Leave Red States

Speaking from experience, I can tell you there are plenty of valid reasons why many LGBTQ folks either can't, or simply don't want to, get the hell out of their red states. The fact is, some of America's most queer-friendly cities, like Seattle and NYC, are also the most expensive. Plus, if you or your partner have roots in say, Kansas, then you might not feel like moving all the way to Portland. It's also true that a lot of LGBTQ folks want to be the change in their communities instead of fleeing them for friendlier political climates.

Fortunately, even the most anti-LGBTQ states have their own progressive havens. If you're a queer person living in Missouri, Kansas City will welcome you. If you're an LGBTQ person living in Tennessee, Short Mountain Sanctuary is your safe space. If you're queer in Alaska, Anchorage is where you need to be. And if you're an LGBTQ person living in a red state that's not mentioned here, check out this list of the most gay-friendly cities in every red state in America. Because no matter what part of America you live in, you deserve the right to exist, and there is somewhere you can safely call home.