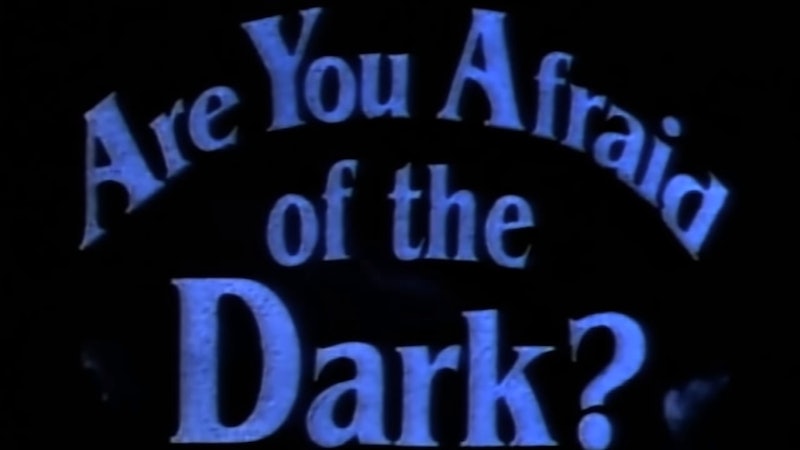 Gather around the campfire, children; these Are You Afraid of the Dark? reboot details are so spooky, they'll take you back to the Midnight Society. Nickelodeon has officially cast the coveted group of ghost-story telling members for its upcoming remake of the anthology horror series, Are You Afraid of the Dark? The new Midnight Society members are Gavin (Sam Ashe Arnold), Akiko (Miya Cech), Louise (Artemis Fowl’s Tamara Smart), Graham (It’s Jeremy Taylor) and Rachel (Black-ish's Lyliana Wray). The limited series will follow the new Midnight Society group as they tell the tale of the Carnival of Doom, "only to have the events of the story come to life," as Deadline reported. Along with new Midnight Society members, viewers will also be introduced to Mr. Tophat (Rafael Casal), the Carnival of Doom's ringmaster, in the spooky retelling of the 1990 horror classic.

Written by BenDavid Grabinski and directed by Dean Israelite, the Are You Afraid of the Dark? limited series will consist of three hour-long episodes on Nickelodeon. While fans are still very much in the dark (see what we did there?) in terms of when the reboot will premiere on TV, the limited series was originally set to coincide with the theatrical release of the Are You Afraid of the Dark? film in October (the movie has sense been been pushed back by the studio). But it sounds like the limited-series could still premiere on the network sometime in the month of October. It's an awfully fitting premiere month given the show's peg to Halloween, the spookiest holiday of them all.

While the Are You Afraid of the Dark? Nickelodeon miniseries will remain in its October release slot, the network actually announced that the big screen adaptation (initially slated for an October 11 big screen premiere) will debut at a later time due to some "behind-the-scenes changes," as per Deadline. Following the initial announcement of the film's release date, screenplay writer Gary Dauberman said that the film would honor the spirit of the original '90s horror series. In a September 2018 interview with SlashFilm, Dauberman teased the film,

"That show is so important to me. I didn't want to age it down too much because for it's time, it had some really disturbing episodes and some really dark episodes. Not every story the Midnight Society told ended with happily ever after or a person learning their lesson and it will never happen again," he said. “I really embraced that side of things. I think fear is healthy for kids. I don’t think we have to always sand down the edges of things and that’s something I really wanted to do with Are You Afraid of the Dark? I think it’s got a great message."

The movie may still be a ways off, but Nickelodeon's revival is right around the corner. And the Carnival of Doom sounds deliciously menacing. Perhaps as adults, nostalgic fans will be less afraid of the dark after a viewing. And if not, there's certainly no shame in using night lights.