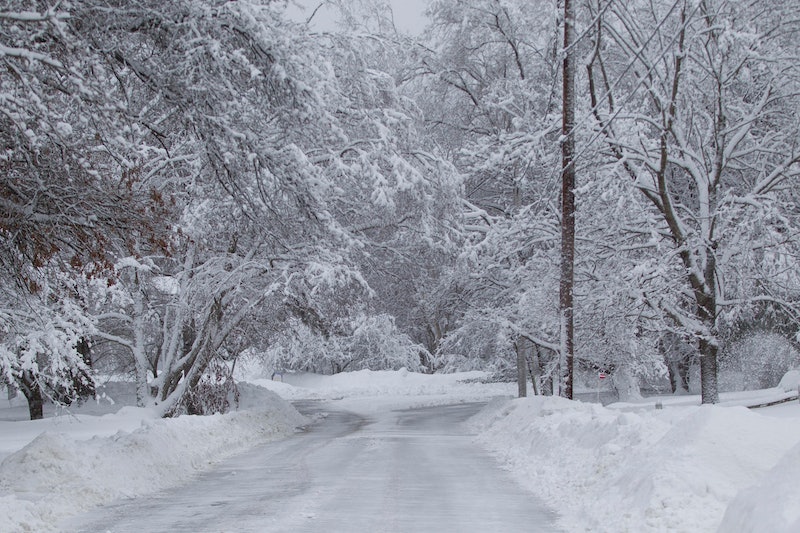 North Florida and Georgia are already feeling the impact of Winter Storm Grayson, and the extreme winter weather is only supposed to intensify over the next few days. Predictions about the "bomb cyclone" show the storm's path stretching all the way up the East Coast, and parts of New England could be hit with more than a foot of snow, depending on the air pressure over the Atlantic Ocean.

Meteorologists expect Winter Storm Grayson to move north pretty quickly, reaching Maine by sunrise Thursday morning. Rapid drops in air pressure are expected to transform the otherwise ordinary winter storm into what's considered a bomb cyclone as it moves up the coast. Low pressure in the western Atlantic Ocean is expected to ramp up and head northeast Wednesday evening, but the storm is likely to become a bomb cyclone no matter where the low air pressure ends up materializing.

The Weather Channel also explains that "regardless of the track, the low [sic] will likely undergo what meteorologists call bombogenesis, which is a rapid drop in atmospheric pressure of 24 millibars or more in a period of 24 hours," turning Winter Story Grayson into a more serious "bomb cyclone."

Because meteorologists forecast low air pressure to crop up somewhere, the storm will continue to progress and bring at least some snow to the northeastern United States. The Washington Post breaks down how much snow each area can expect:

"From Norfolk to the Maryland and Delaware beaches, at least 5 to 8 inches of snow is predicted, with as much as a foot possible between Wednesday evening and Thursday afternoon ... Farther inland in the Mid-Atlantic, near Interstate 95, up to an inch or so called fall in Washington and Baltimore, but more in their eastern and southeastern suburbs, where several inches are predicted. To the north, Philadelphia expects one to one three inches of snow, while New York City is forecast to receive at least three to six inches late Wednesday night through Thursday.

Further North, New England will likely see between 6 and 12 inches of snow, according to CNN. If the low air pressure is closer to the coast as expected, the snow will fall on the higher end of those predictions — and part of New England (including Maine and New Hampshire) will experience blizzard conditions.

Forecasts show the storm ramping up overnight Wednesday, and snowfall could continue in New England through Thursday night. On top of the snow, strong winds will also plague the eastern part of the country. North Carolina could experience winds upwards of 50 mph Thursday morning, with winds in New England following closely behind Thursday evening. The National Weather Service warned that power outages could affect the Boston area Friday or Saturday if these dangerous gusts persist.

If the low air pressure follows a track closer to the East Coast, New England could experience record low temperatures. The National Weather Service predicts the freezing temperatures and wind chills will last through the end of the week, so stay bundled up and avoid going outside or driving when the storm hits your area.

More like this
What To Know About Taking More Than 1 Piriteze Per Day
By Bustle UK
The 6 Best Balaclavas To Keep Your Face, Head & Neck Comfortably Warm
By Jenny White
How To See The Lunar Eclipse On May 15-16, 2022
By Kaitlyn Wylde
Benefit’s New Blush Collection Will Send You Straight Back To The Year 2001
By Faith Xue
Get Even More From Bustle — Sign Up For The Newsletter