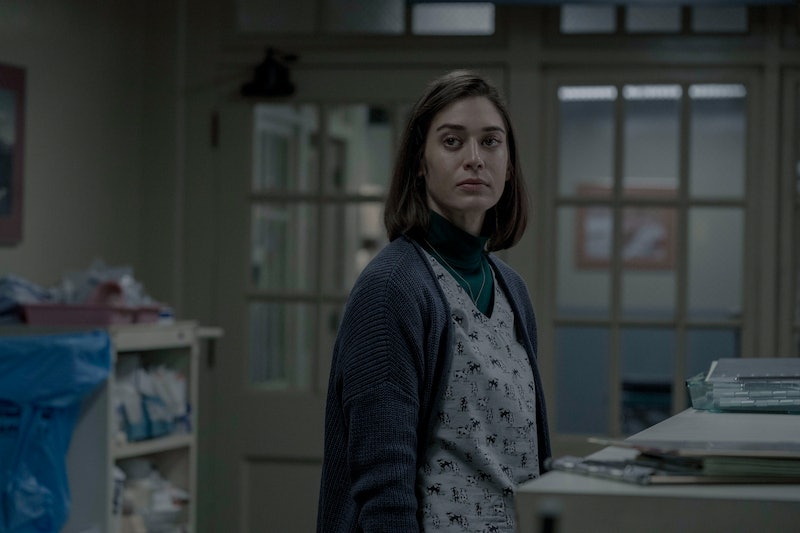 Castle Rock's second season is a heady mash-up of some of Stephen King's most popular horror novels, from Salem's Lot and Pet Sematary to Misery and who knows what else. The interwoven plot has led to a number of Castle Rock Season 2 theories, with many fans trying to piece together Annie Wilkes' past, Joy's future, and what in the world is happening at the Marsten House. Four episodes into the season, here are the best theories so far.

A very popular theory on Castle Rock's Reddit is that Annie (Lizzy Caplan) is not, in fact, Annie from Misery, but that her daughter Joy (Elie Fisher) will actually become the infamous villain.

"Maybe I'm reading too much into it, but she dresses and looks like Kathy Bates from the movies," wrote Reddit user StickGuy259. "She even tied up her mom in a way that clearly echoes the movie Misery."

Karasaid agreed. "The similarities between Joy and Kathy Bates' Annie Wilkes are remarkable. Crew collars, cross necklace, romance novels, aversion to indulging profanity, 'take your pills,' keeping someone drugged and in captivity to control them."

Other users backed up the idea, pointing out that the Marsten House plot will likely spill into Annie and Joy's story, and Joy may lose Annie or be forced to kill her. That horrific act may just be Joy's tipping point that will cause her to take on Annie's name and her mindset that the world truly is evil.

Annie Is Trapped In a Fictional World

Annie is clearly an unreliable narrator, and Reddit user LovecraftianLlama believes the Annie we're seeing onscreen may actually be trapped in the story that she forced Paul Sheldon to write for her in Misery. They point out that Annie keeps hearing a typewriter, and that Joy even ties down Annie in the same way Annie tied down Paul in Misery.

"I think that the author wrote Joy as a kind of cruel irony to punish Annie for what she did to him," they theorize. "Annie sees Joy as her one ray of hope and the bright spot in her life ... and the author has unleashed the ultimate cruelty on Annie by not only putting her in what seems to be a horror novel, but also making the one thing she loves the cornerstone of her delusion."

Some Redditors believe Joy isn't even Annie's daughter at all, but Paul Sheldon's, who Annie met years ago in the Castle Rock universe.

"This Annie ALREADY met her favorite little author years ago and that Annie is the daughter of Paul," writes DM_Malus. "I think that she stole the baby from Paul and the real mother, whether the baby was unwanted or was in a dangerous environment is unsure. But I think she was trying to 'save' the baby, and she sees the baby as the 'joy' of her life because it is the remnant of her beloved Paul."

Does this mean that Paul is the Tall Man Annie sees, then, or is he just a manifestation of her schizophrenia worsening?

Ace Is A Resurrected Old Soul

Marsten House is vampire central in Salem's Lot, and it's clear the resurrected Ace definitely isn't who he used to be. Think Story on Youtube had an early theory that Ace may be Pennywise (due to his Derry reference) but now thinks he's likely inhabited by an original colonialist, witch, and/or Satanist.

Perhaps Ace is now Damien Aucoin, who we're briefly shown was buried in the crypt that Annie fell into. (PockyClips on Reddit even points out that Ace's reflection is a different man.) Damien died in 1619, when Castle Rock was founded, and has a French-sounding name. Ace, meanwhile, can now speak French and orders himself red wines, which is very different from how he was portrayed in the beginning of the show.

Chris also catches Ace watching old home videos of Abdi, Nadia, and them, like he's having to learn how to be Ace.

Reddit's CorrectHorseStapler doesn't see Marsten as just a vampire house, and instead points to the works of H.P. Lovecraft. "I don't think this will involve vampires. The original short story Jerusalem's Lot dealt with a Lovecraftian cult," they theorize. "Considering what we saw inside the house in episode three, I'm guessing they're headed towards there being some sort of creature that was summoned in the 17th century."

It's true, the image of the dead cop climbing out of a goopy bathtub, newly healed, doesn't seem to jive with most vampire myths.

Back in Castle Rock Season 1, these two men conspired to keep the secret about the Kid locked up in Shawshank, and in Season 2, Nadia sees glimpses of correspondence between Pangborn and her foster dad Pop. So does Pop know about the Kid still locked up in the prison by Henry Deaver? Does this mean the Kid is still responsible for the overall evil happening in town? Series co-creator Dustin Thomason teased at New York Comic-Con that Season 2 will have "unexpected" connections to Season 1, and this would certainly qualify.