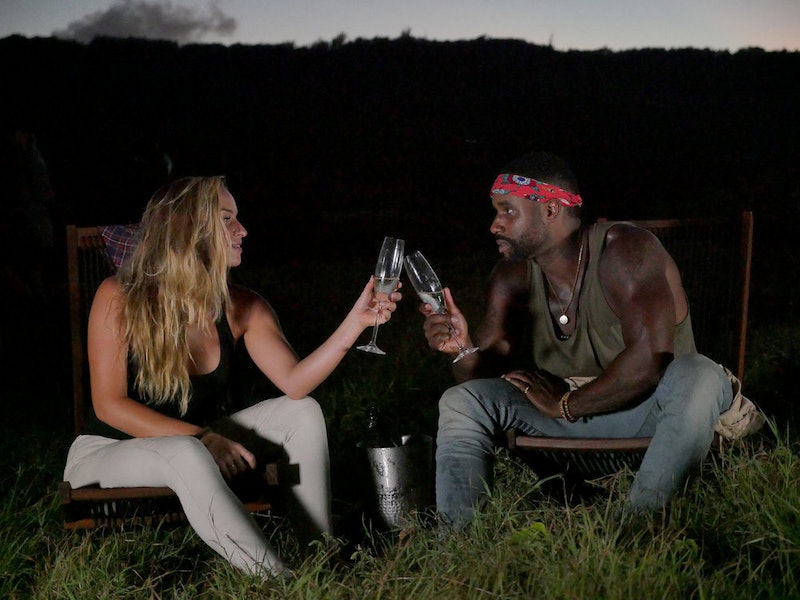 At the beginning of the Temptation Island revival, Nicole and Karl seemed to be one of the strongest couples. But now, in a surprising turn of events, it looks like that may not be the case. As the season comes to an end, it's becoming more apparent that Karl and Brittney may have a better connection.

Brittney admitted to being drawn to Karl on day one, but Karl kept his distance. He took pride in being a loyal guy, and always had Nicole at the back of his mind. He still does, but after seeing Nicole in bed with one of the single guys, he started having mixed feelings. When they had the opportunity to leave video messages for one another, there was an obvious disconnect. Karl told Nicole he was hurt, but he didn't seem emotional about it. He told Nicole to go ahead and "dive into this experience." In her video, Nicole admitted that her experience on the island has revealed to her that their relationship has been only "surface level."

After hearing Nicole say that, Karl agreed, and even admitted to having "deeper relationships" in the past. "Time apart from my boyfriend has really allowed me to discover more about myself and really reflect on my actions and my relationship and kind of the goals that I want in life individually,” Nicole said in the March 5 episode. "It's weird for me to even say the word boyfriend right now. I just don’t feel it, which is not good. I just don’t really feel the love."

In the same episode, Karl started to give in to his connection with Brittney. They were spotted skinny dipping in the hot tub together (it's always the hot tub), and cuddling close. They also shared a date where Brittney wasn't shy about her "synchronistic" feelings for him. "The draw is so powerful and so super charged," she said.

Karl is beginning to feel the same way. "I feel great with Brittney," he said on the show. "She's supported me and my emotions with what I was going through [with Nicole]." He went on to tell Brittney that he's a firm believer in "what's meant to be," which sounds like he's embracing a go-with-the-flow mindset. He's also made it clear that his love language is physical touch, and Brittney has given him plenty of that, making it hard for him to resist. She has offered to sneak into his bed and "roll around" with him multiple times.

Just as on shows like The Bachelor, the Temptation Island cast has to keep quiet about how things played out, but there is some insight to be gleaned from social media. Nicole, Karl, and Brittney's Instagram pages are all almost exclusively filled with photos of themselves, which only means that if any of them are dating someone, they're doing a good job of hiding it. Plus, Nicole and Brittney still follow Karl on Instagram, and Karl follows them both, too, so that doesn't clear much up about what happened.

However, Karl shared a video from the island in December captioned, "Trust me when I tell you... ANYTHING can happen on the island," and when Britney began promoing the series around the same time, she called the experience "life-changing" in a video posted to her page. Even more suspicious, Nicole wrote on her Instagram that she and Karl "put [a lot] on the line" going on the show, and that she "probably wouldn't go back and do it again," but that she was "thankful for the opportunity to really evaluate" their relationship. Combined, this seems to hint Karl and Brittney end up together, or at the very least, that he and Nicole don't last.

Karl also shares his general feelings about love and relationships pretty frequently through retweets. Based on those, it seems like he's either definitely in love with someone (whether Brittney or Nicole, we don't know), or single and looking for an intimate type of love. As one retweet of user @atenz11 reads, "Karl, just go on ahead and get it. Your girlfriend already moved on with somebody else." Does that mean he did, in fact, "go ahead and get it"?

He also retweeted this:

Does that mean he has a relationship like that or is looking for one? All will be revealed on the Temptation Island season finale on March 19.