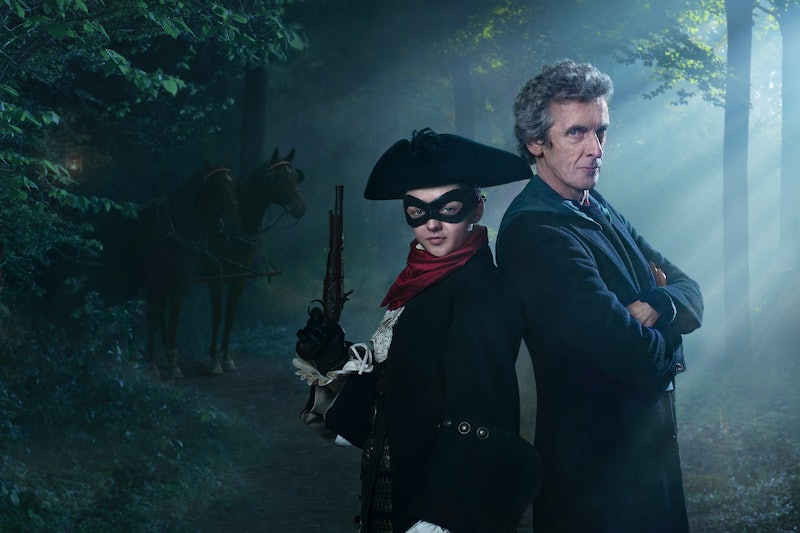 On Sunday, BBC and BBC America will formally announce the name of the actor who will be stepping into the TARDIS to assume the role of the Doctor in Doctor Who. With both Peter Capaldi and showrunner Steven Moffat exiting the series after the Christmas episode, Doctor Who has the potential to regenerate into something special, like, perhaps, a show with a female Doctor. However, the mere idea of the Time Lord being played by a woman has many fans in a tizzy, and that's exactly why Doctor Who needs a woman at the helm of the TARDIS.

Early Saturday, Twitter user and author TechnicallyRon brilliantly lampooned the panic and anger dominating the comment section of a Daily Mail article suggesting the next Doctor might not be a man by turning the comments into potential episode titles. One title card reads, "Time Travel Is For Men And Men Only" by Andy from the Country. It's an absolutely absurd statement that only highlights why Doctor Who, a show so enamored with the beauty of humanity and exploration, needs to make a change.

In the recent Season 10 finale, the Master asks the Doctor, "Will the future be all girl?" His question is prompted by learning he will regenerate into a woman, and that the Doctor's companion, Bill, is a female Cyberman (thanks to his own manipulations). The Master sounds much like the angriest voices on the internet, the ones who don't want any bras in the TARDIS and are appalled by the idea of a woman stepping into the Doctor's shoes. However, the Doctor's response is simple, and true to the character's two beating hearts, "We can only hope."

You know there's a problem when a segment of a show's fanbase sounds more like the villain than the hero. First and foremost, Doctor Who is a show made for families to enjoy together. It has been since its debut more than 50 years ago. Children sit down and they see the Doctor with all of his love for people and the universe, and they're introduced to a superhero who uses his wits before he ever touches a weapon. That this 2,000-plus-year-old alien has to this point only been played by white men is not a solid argument for why things should stay the same. Whether the Doctor is a man or a woman, the character's values will stay the same.

What would change is how the character sees the world. Seeing the Doctor confront being treated differently as a woman during the character's frequent jaunts through history could be eye-opening for some viewers. It would also give the show the perfect excuse to subtly address the problem with gender stereotypes. More than that, it would be a new experience for the character, and there's nothing the Doctor loves more than the joy of discovery.

More important is the impact a female Doctor could have on the future. If a woman does step into the role, the next generation of men and women who grow up watching the character perhaps won't feel the need to tell the world that "political correctness should not exist in space." And wouldn't that be a wonderful thing?

The idea that a female doctor has anything to do with being politically correct is a frustrating concept in the first place. Hoping for a female lead is less about wanting the show to make a political statement than it is about wanting it to make a creative one. As an alien with regenerative powers, why should the Doctor be limited by gender or race? The possibilities of who the character can be should be as limitless as the expanse of time and space.

The odds-on favorite to play the 13th Doctor is Kris Marshall. Chances are, this year won't be the year that the series challenges its self-imposed limitations. But it should be, because fans of all ages need to understand that the only prerequisites for playing this marvelous character should be talent and the capacity to embody an ancient alien with an insatiable hunger for new adventures. If the Doctor is going to persist for another 50 years, the character needs to continue to evolve, not stagnate.

Ultimately, it's never too late to prove to the world that time travel and the Doctor are for everyone. It would be a sign of progress for this timeless series if the BBC agrees.