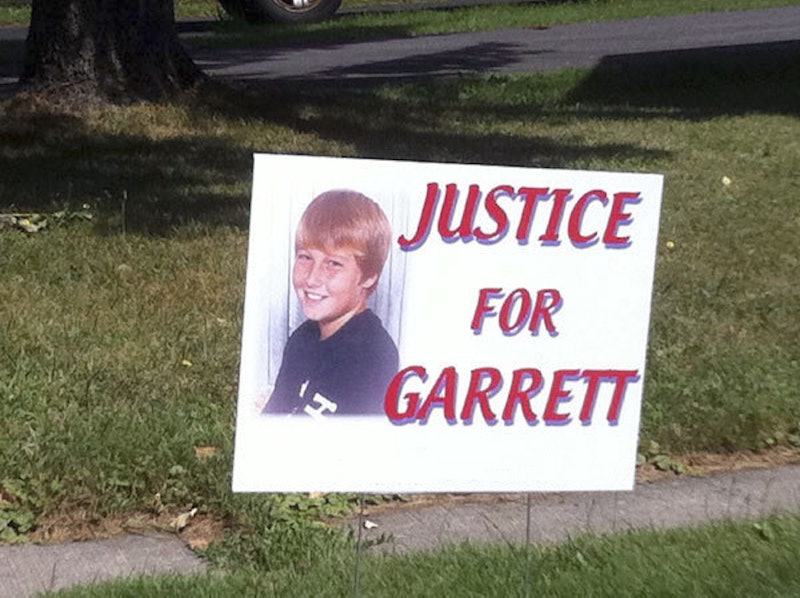 The new documentary Who Killed Garrett Phillips?, airing on HBO July 23 and 24, looks into the unsolved 2011 death of a 12-year-old boy by that name. Clearly, the film won't be answering the question in the title, but when it comes to 2019 updates in the Garrett Phillips case, there have been a couple new developments. And for director Liz Garbus, she hopes her film only leads to more tips and, potentially, justice for Phillips at long last.

In October 2011, Phillips was killed in his home in Potsdam, New York. Soon after, Nick Hillary, a Jamaican-born man who had previously dated Phillips' mom, Tandy Cyrus, was made the primary suspect by police. As reported by ABC News, Hillary and Cyrus had been together for a year, but broken up months before Phillips' death. Hillary maintained his innocence and there was no forensic evidence linking him to the death, according to NBC News. When Hillary later went to trial, he also had witnesses provide an alibi for his whereabouts at the time of Phillips' murder.

Because Potsdam is a small, primarily white town, and Hillary, a black man, became the main suspect so quickly, the case brought up issues of how black people are treated by police and in the legal system, ideas that Garbus' documentary now explores.

And while Hillary was acquitted in the murder of Phillips in 2016, he still had his own civil case against the village of Potsdam, St. Lawrence County (in which Potsdam is located), and the Potsdam police for, he claims, violating his civil rights. According to ABC News, this case was filed in 2012 and in it Hillary alleges "physical and psychological trauma" from how he was treated.

That civil case is still in progress now. NNY360 reported in March of this year that a judge dismissed several of the claims, including "all claims against the county, including those involving the actions of former District Attorney Mary E. Rain and Sheriff Kevin M. Wells, as well as all claims against state police investigators." Some defamation and conspiracy claims against Potsdam village were allowed to go forward, as well as Hillary's claim that he was targeted because of his race, which falls under the 14th Amendment.

Also in March, NNY360 reported that there was a new lead in the Phillips case involving inconsistent statements that neighbors of the 12-year-old gave to police in the days following the murder. Gary M. Pasqua, St. Lawrence Country District Attorney, said at the time, "I have always said, in my mind, this is an open case because nobody has been convicted. So any time someone brings forward a lead to us, we have it vetted by the appropriate law enforcement agency, we have them look into it and if anything comes of it, obviously we will follow up on it."

Speaking to Variety, Garbus explained that she hopes her film can shine an even brighter light on the case, which could help bring out more leads and possibly bring Phillips justice. She noted that this is something that local reporters have been already devoting themselves to. "They are the only reason that Nick is not in prison," Garbus said. She added, "True crime is popular because there’s a healthy impulse to want these things to be solved. Tips come in. People want to be heroes. I think of Michelle McNamara: Did that book [I’ll Be Gone in the Dark] solve that case? No, the police did. But at the same time, so many armchair sleuths, so many Reddit boards, so much discussion only increased the chances of it being solved.” Now, Who Killed Garrett Phillips? might be able to do the same for Phillips as the late McNamara's book did for the Golden State Killer.