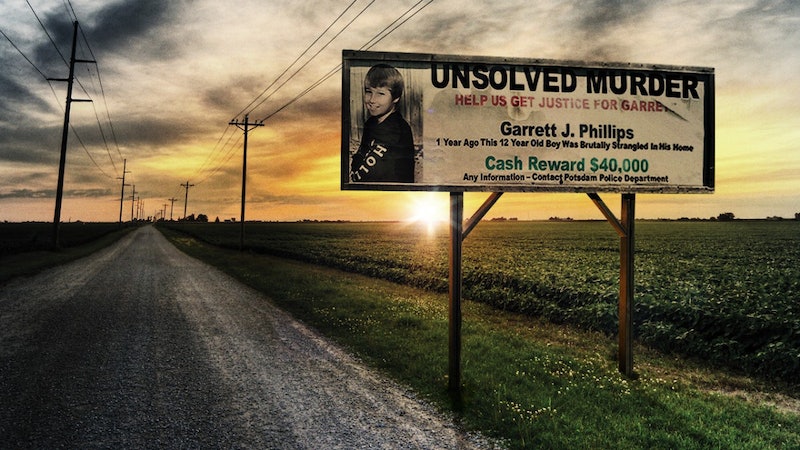 HBO is back with yet another true crime documentary, but this one has a bit of a different focus than most. Despite the title Who Killed Garrett Phillips?, the two-part film's main subject of discussion is the man accused of the crime, Nick Hillary. So where is Nick Hillary in 2019, and what does the documentary, the first part of which airs on July 23, reveal about his saga?

Garrett Phillips was a 12-year-old boy who was murdered in his small hometown of Potsdam, NY in Oct. 2011. As the documentary shows, Oral "Nick" Hillary was determined to be the main suspect by police. At the time, Hillary was the soccer coach of Clarkson University, located in Potsdam, and also the ex-boyfriend of Phillips's mother, Tandy Cyrus. He also is black, whereas Phillips, Cyrus, and most of the population of Potsdam is white. Hillary has maintain his innocence throughout. He was charged with second-degree murder in the case, and after a lengthy court battle, he was acquitted of the murder in 2016, with the last related charges against him finally being dismissed in 2018, per North Country Public Radio. But just because the case against Hillary has ended, that doesn't mean this story is over. There is still the matter of finding Phillips' real killer, and in the case of Hillary, he's looking to get find justice for himself.

In 2019, Nick Hillary is still in the news. He participated quite a bit in the documentary through interviews, and has made public appearances to promote the movie. He's not in jail, but he did lose his job as a result of his legal troubles. He's also raising a family, and as HBO puts it, he's trying "to move forward with his life caring for his five children." Hillary is also trying to get back some of the years he lost due to the false accusation by filing a civil suit against those involved with his arrest and murder accusation.

Hillary's first suit was filed back in 2012. In it, he accused police of violating his civil rights. The suit states that he was taken into custody two days after Phillips's murder and was strip-searched, had his phone taken away, and was sent home without his clothing, according to ABC News. Hillary wasn't officially arrested for the alleged crime until 2014, and after his acquittal in 2016, he filed a separate lawsuit that was far larger in scope.

Hillary's second suit alleges further instances of wrongdoing by various entities associated with Hillary's prosecution. It accuses the Potsdam police department of racial discrimination in targeting Hillary in the case. The suit also accuses them of defamation, conspiracy, and retaliatory prosecution; essentially stating that his late arrest was revenge for his earlier lawsuit. In March of this year, a judge tossed out some of Hillary's claims — specifically those that named New York State Police and St. Lawrence County as defendants — but other charges against the local police department, DA's office, and certain individuals are moving forward, according to North County Public Radio.

Currently, Hillary is still heavily involved with a case relating to the murder of Garret Phillips, and the new true crime documentary will only amplify that connection. But these days, Hillary is no longer the defendant. Instead, he's trying to find justice for himself after having been accused of a crime he didn't commit.