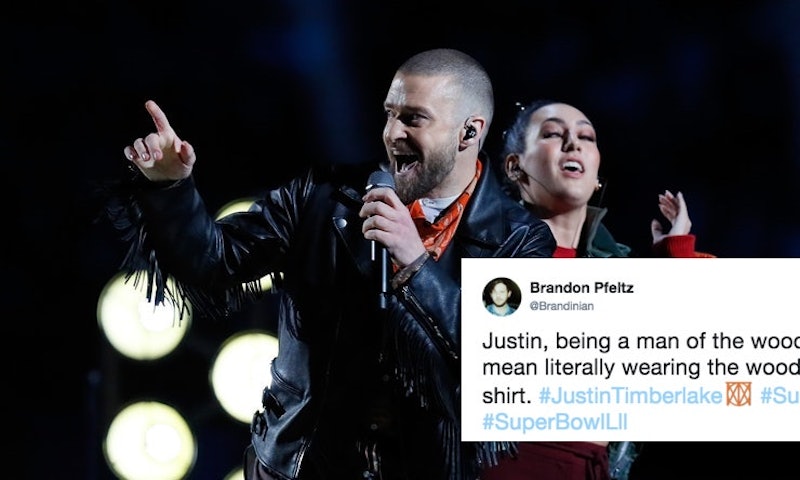 In 2018, does an event even happen if it's not turned into a meme immediately after occurring (or, even better, while it's happening)? No. The answer is no. Fortunately, the Super Bowl did happen and there's all kinds of memed proof. On Sunday, Feb. 4, the Justin Timberlake 2018 Super Bowl halftime show memes were everywhere on Twitter, and people were pretty upset about the show. Like, really upset. So, they took to Twitter to express their anger in picture form. And they did not hold back.

Of course, JT is in good company. In 2017, the big Super Bowl halftime show meme was all about Lady Gaga flying into the stadium from the roof, with many likening the moment to Spongebob Squarepants hanging from the ceiling after performing Goofy Goober Rock. It was a pretty harmless meme, but the JT ones were decidedly less so. So, what was the Spongebob moment of Super Bowl LII? People being mad at JT. Like, really really mad.

Not that you can blame people too much, really. Timberlake delivered a clean but fairly boring appearance with no all-star guests (not including the Prince video tribute) and not a ton of energy. The show wasn't surprising or all that exciting. And, because people on Twitter can be vicious with just a hint of blood in the water, they took off after Timberlake. Tweets and memes ridiculed him for everything from his outfit choice to that Prince tribute and all the stuff in between. (At least Selfie Kid had fun, though, right?)

Overall, though, the tweets and memes were way harsh, Tai. But that kind of criticism comes with the territory of performing on a national stage at one of the biggest events of the year. You can't make everyone happy on Super Bowl Sunday. Or, really, even just most people, apparently — if you're Justin Timberlake.

People Hated What He Wore (Especially That Bandana)

The bandana was a strong choice to say the least, and people took notice... in a negative way. Add to that his woodsy T-shirt and camo suit and people had a lot to say. And, none of it was nice. None.

People Assumed Prince Would Have Hated It

The two singers allegedly had beef, so this tweet doesn't come out of nowhere.

People Reminisced About Other Halftime Shows

When in doubt, tweet about what you did like? Judging by these tweets, people mostly missed Lady Gaga from last year and Katy Perry from 2015. (Nobody seemed to miss Coldplay, so JT can take comfort in not being the only act to fall flat.)

Heck, some people even talked about the Spongebob halftime show from the animated cartoon. It seems JT just wasn't able to leave a mark of his own, so people took to tweeting about previous years. (Left Shark forever, though.)

There Were Still So Many Spongebob Squarepants Memes

Lady Gaga wasn't the only act compared to this show. This cartoon is eternal, guys. It will forever be relevant. It is not a halftime show if Spongebob is not discussed on social media. Period.

But, At Least ONE Person Seemed To Enjoy It

All hail #SelfieKid. This guy was so stoked to grab a selfie with JT himself, and then he promptly took to looking at his screen to post or text about his special photo. Is #SelfieKid the new Left Shark? Maybe this will make Timberlake's halftime show memorable after all. It just takes one meme to turn a tide.

In any case, maybe JT couldn't wow most people — but he did leave this one kid starstruck. And, sometimes you just gotta focus on the wins.