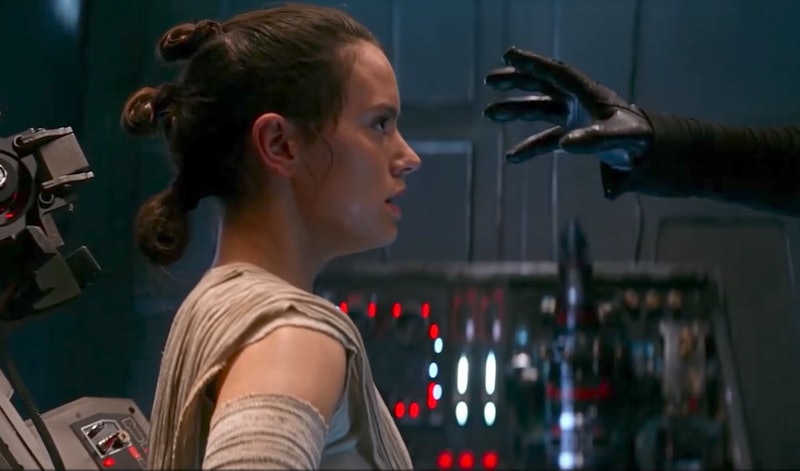 If Star Wars Episode VII was called The Force Awakens, then Episode VIII could have been called The Romance Awakens. The Force that awakened in Rey during Episode VII actually is the cause for her and bad boy Kylo Ren's connection, as they literally use the Force to connect in a weird long-distance relationship during The Last Jedi. Now everybody wants to know if the two characters will get together in Episode IX, and there are plenty of Kylo Ren and Rey relationship theories to conjure up until that movie finally reveals all in 2019.

A lot of Reylo — the couple's "Brangelina" (RIP) like moniker — 'shippers believe that The Last Jedi provided solid proof that the two will get together. The truth is, they could theorize all they want but nobody actually knows the true answer as to whether or not Kylo and Rey will get together officially.

Director Rian Johnson told Bustle right after The Last Jedi's premiere that even he isn't so sure about the two's relationship. The scene in which Kylo told Rey that her parents are "nobodies" and "junkers from Jakku" serves as evidence that Kylo does care for Rey, in Johnson's opinion, though, so that may hint that the emotional connection for Reylo goes deep. "For me the important part was saying it was an emotionally honest revelation, I feel like it, I don’t know, I believed it," Johnson said over the phone when asked about Kylo's harsh words about Rey's parents.

The emotional, honest connection between Rey and Kylo was most prominent during other scenes of The Last Jedi though, when Rey was on the island of Ahch-To to pester Luke Skywalker. Despite their physical separation, the two communicated using the Force, and it almost seemed like a strange remake of Sleepless in Seattle featuring Porgs. There even was that one sexy shirtless Kylo scene that made everyone wonder if they were watching the right movie.

Many people point to the fact that Kylo Ren and Rey touched each other's hands during their telekinetic flirtations as evidence that the two will become romantically involved. Others believe that the fact that Kylo killed Snoke in order to save Rey, essentially fighting with her, proves that the two together represent balance in the universe. With Rey representing lightness and Kylo representing darkness, the duo being together could create the balance that Jedi Masters like Luke Skywalker have been trying to restore within the universe.

One important and darker theory about Reylo is the fact that the couple resembles an unhealthy relationship. As Buzzfeed points out, the way Kylo manipulates Rey to feel like she doesn't have anybody in the world besides him in The Last Jedi echoes behavior of manipulative and abusive partners. While some Reylo shippers seemed to find that sentiment romantic, others were deeply disturbed by it and likely believe that Rey was right to close the door on her connection with Kylo, as she seemingly did at the end of The Last Jedi.

The Force Awakens also includes Kylo kidnapping Rey and intruding into her thoughts in a way that many could argue doesn't exactly set the foundation of a healthy relationship. Some fans see the pattern between Kylo and Rey as reflective of Kylo's grandparents' relationship, but inverse. In Episode I-III, Padmé Amidala and Anakin Skywalker fall in love, but Anakin turns to the Dark side, becoming Darth Vader. Some fans believe that the opposite is taking place with Reylo, as Kylo Ren has begun on the Dark Side, but, as Rey seems to think, he could still have some good in him.

Regardless of whatever romantic chemistry Kylo and Rey seemed to have throughout The Last Jedi, the movie ends on a pretty decisive note that implies the duo don't end up together — not yet, at least. The theory that Kylo and Rey are moving in reverse of Padmé and Anakin's could be right, but it actually would be best if it weren't. That's because Rey is such a dynamic and powerful character, and while Padmé was a queen with her own powers, the Star Wars movies with her in them mainly focused on Anakin's personal turmoil.

While many believe that Episode IX will include an official Reylo union, it might be better if it doesn't. Rey is so much more than just an impetus for Kylo to turn to the good side, and she should be treated as such.