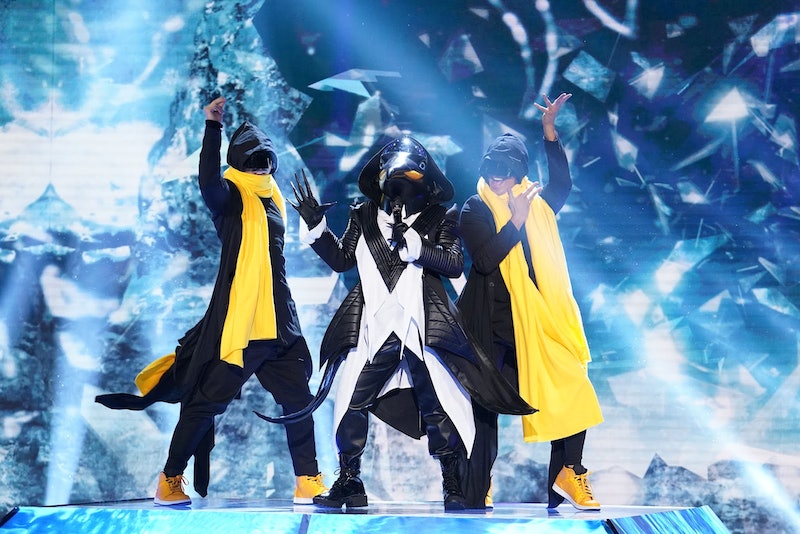 Now that all the contestants have showed off their voices on the Masked Singer stage, it's time to start seriously guessing who is singing underneath the masks. And after Wednesday night's episode, there are quite a few Masked Singer Penguin theories swirling around. The Penguin sang for the first time on Oct. 9, performing Maren Morris and Zedd's "The Middle." She ended up in the Smackdown with the Eagle, but beat him with her rendition of Fifth Harmony's "Worth It." Now, after two songs and multiple clues, fans have a few theories on who might behind the Penguin mask.

In her clue package, the Penguin described her costume by saying, "Penguins are incredible expressive birds, so it's in my DNA to strive for my voice to be heard." She also revealed she's lived her whole life being told she's not pretty, smart, or funny enough, and that she joined the competition series to show others that there's nothing wrong with being different.

Despite judge Robin Thicke and other fans guessing Raven Symone is the Penguin, many continue to stand by their theory that Symone is actually Black Widow, who performed in a previous episode. Assuming the Penguin isn't Raven Symone, there's still a long list of celebrity possibilities, including a former View co-host, an Ugly Betty star, a former Olympic figure skater, a singer from a famous family, and a comedian known for causing controversy. Here are the theories about the Penguin fans can't stop tweeting about.

In the Penguin's clue package, there were two literal signs that suggested to fans that Sherri Shepherd is the celeb behind the Penguin mask. One read, "Jesus Came First," and the second read, "I'm Not Your Secretary." As pointed out by The Washington Post, prior to her career in Hollywood, Shepherd worked as a legal secretary. And Shepherd famously said "Jesus Came First" during a 2008 discussion on The View about religion.

The Penguin also said in her video, "I don't need a permission slip from anyone to be who I am," a sentiment that could be hinting at Shepherd's 2009 book, titled Permission Slips: Every Woman's Guide to Giving Herself A Break. Furthermore, photos of a woman were shown hanging on the Penguin's mirror. Twitter user @JenniPlam said they might be Queen Rania Al Abdullah of Jordan, who once sat next to Shepherd on The View. Jenny McCarthy also guessed that the Penguin was Shepherd, who she also worked with on the daytime talk show.

Others believe the Penguin could be Tamar Braxton, Toni Braxton's sister and current co-host of The Real. In the Penguin's first clue package that aired prior to the Season 2 premiere, she said she was "bringing the heat," which, as noted by Good Housekeeping, could refer to Toni's album The Heat. That package also mentioned getting her hair done for the finale and showed the Penguin wearing different wigs. Tamar is known for her variety of hairstyles. And, The Penguin is wearing a tux-like costume and Tamar wore a tux on her Love and War album cover.

Kathy Griffin is known for causing controversy that has affected her career, including when she was fired from CNN in 2007 over the photoshoot that featured Griffin posing with a decapitated Donald Trump head. The Penguin's clue package did state, "Clearly this bird did not get the word that her career is over," hinting at a comeback artist, which would definitely track with Griffin. A "Hit List" was also shown in the clue package, which could be referring to when Griffin claimed she was placed on a "Kill List" in 2018 following the Trump photo incident.

A fake news headline in the Penguin's clue video read, "Penguin's Career On Ice." Some fans took this literally to mean that the Penguin might be a famous ice skater, specifically Tonya Harding. Seeing as how her career came to an end following the infamous attack on Nancy Kerrigan in 1994, many think she might be the Penguin, returning to the spotlight after her career being "over." (Harding's denied any involvement in the Kerrigan attack, but pleaded guilty in hindering the investigation, per The Washington Post.)

Out of all these theories, Shepherd is definitely the most popular, but only time will truly tell if she's under the mask.