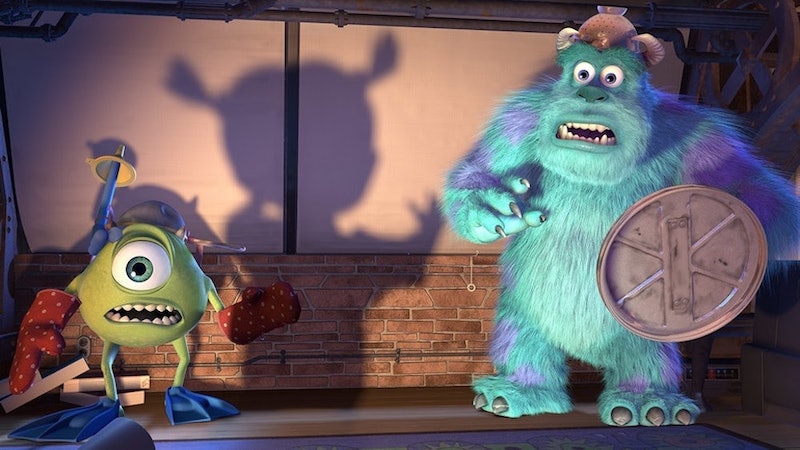 Reboots, sequels, and spin-offs are in full swing now, with nostalgia a major factor in a lot of works. And it's no wonder why. The truth is, it's easy to get excited about favorite characters coming back, especially ones as beloved as Mike Wazowski and James P. "Sulley" Sullivan. So fans will probably be happy to hear some new details on Disney's Monsters Inc show coming to Disney+ in 2020. The series was already announced in April, but now Disney has just announced more details that make Monsters At Work even more exciting.

Reporting from the Annecy Intl. Animation Festival on June 10, Variety noted that in addition to announcing a Chip and Dale cartoon, Disney also updated fans on the Monsters Inc. show. The new logo for Monsters At Work was revealed, along with a poster that introduces a new main character, Tylor Tuskmon, a mechanic at the factory, who's leading the next crop of Monsters Inc. employees.

This new series will continue Sulley and Mike's journey from Monsters Inc., taking place just six months after the movie. It might have been 18 years since fans first saw Monsters Inc. in theaters, but for the two resident monsters, it's been less than a year, so it's no wonder they look just as you remember them. In case you don't remember, Monsters Inc. ended with the two creating a new laugh-fueled energy system and Sulley went to visit Boo in the door Mike put back together for them.

In a press release received by Bustle, Disney confirmed that the new character Tylor is going to be voiced by Ben Feldman (Jonah Simms on Superstore). It also confirmed, again, that the original stars Billy Crystal and John Goodman would be returning as Mike and Sulley, respectively. And they're not the only ones. Jennifer Tilley is also coming back as Medusa-like Celia, Mike's girlfriend/possible-fiancé by this point. It was also previously reported that Star Wars: The Last Jedi's Kelly Marie Tran is voicing Tylor's best friend Val Little, while Aisha Tyler will play his mom, Millie Tuskmon.

Another bit of info came from the Twitter account @ED92live, which tweeted news from Disneyland Paris, and it might be the only bummer about the series. According to ED92, there's one beloved character who won't be returning in Monsters At Work: Boo. "No Boo in this story that centers around new monsters making energy from laughs in Mike & Sulley’s factory. Catchphrase: 'It’s Laughter we’re After!'" The catchphrase is accurate and cute, but no Boo? Definitely a bit disappointing considering it's a sequel to the first movie, and she was such a big part of the that one. However, you can't keep everything the same, so hopefully the new characters will make up for the lack of Boo cuteness.

Monsters Inc. is a beloved movie and even won an Oscar for Best Original Song for "If I Didn't Have You." Too bad "Put That Thing Back Where It Came From, Or So Help Me!" didn't receive the recognition it deserves. Let's hope for a reprisal in Monsters At Work, shall we?