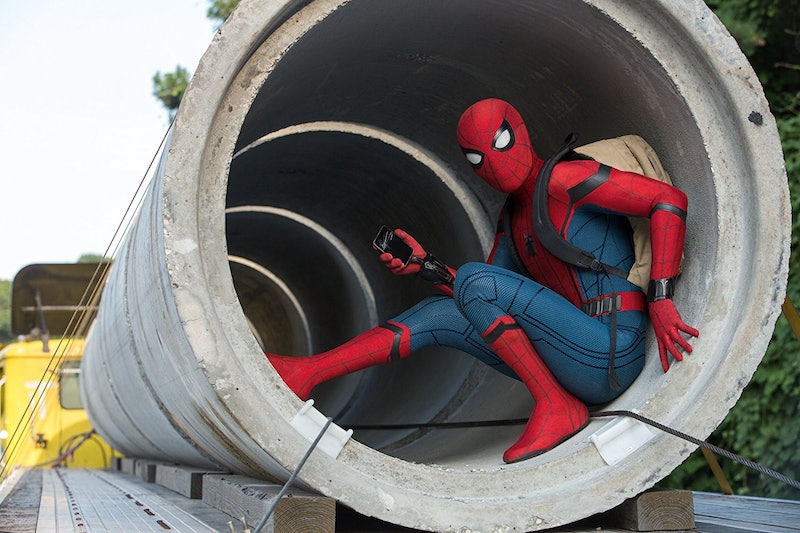 Although the Marvel Cinematic Universe is still reeling in the aftermath of Avengers: Infinity War, the show must go on. The mess created by Thanos isn't expected to be cleaned up until next year's still-untitled Avengers 4, but the film premiering immediately after that — the sequel to Spider-Man: Homecoming — does have a title, and it's leading to lots of interesting Spider-Man 2 theories. The new film will be called Spider-Man: Far From Home, so what is it about this newly-revealed title that has fans so excited?

For starters, the name apparently has multiple meanings, which has the spider faithful trying to guess what those hidden meanings may be. Marvel Studios head Kevin Feige recently told Cinema Blend of the new Spider-Man movie's title, "[It's] similar [to Spider-Man: Homecoming]. I won't say what the meanings are, but we enjoy that title because, like Homecoming, it is full of alternate meaning." As Feige stated, Spider-Man: Homecoming had a number of meanings. Most obviously, the movie's plot revolved partly around a homecoming dance at Peter Parker's high school. The title was also symbolic of Spidey making his debut in the Marvel Cinematic Universe. After Marvel Studios and the holders of Spidey's movie rights, Sony Pictures, reached an unprecedented deal, the character was finally able to "come home" to Marvel after years of isolation at Sony. So what could the multiple meanings of Far From Home be?

When fans last saw Spider-Man, he was disintegrating in the arms of Tony Stark on the far-off planet of Titan. In other words, he was very far from home. It's obvious that Spider-Man isn't going to stay dead — he does have a sequel on the way, after all — so the movies are going to figure out some way to bring him back. Therefore, some have theorized that Spider-Man: Far From Home may see Spidey literally far from home, as in outer space. However, this seems unlikely for a couple reasons. First of all, we already know the movie's main villain is Mysterio, a decidedly Earth-based member of Spider-Man's rogues' gallery (he's a magician who has no actual superpowers). Secondly, Spidey's disappearance is likely going to be resolved in Avengers 4, not Far From Home. But just how that disappearance gets resolved leads us to another theory.

Some believe that Avengers 4 is going to bring about some kind of reset to the MCU, with the characters who disappeared possibly staying dead in the reality we've known for 10 years and the main action of the franchise moving to an alternate dimension where Thanos never gained control of the Infinity Stones; thus allowing alternate versions of these characters to live again. And since Far From Home will be the first MCU movie to be released post-Avengers 4, it would be the first to take place in this alternate universe, taking Spider-Man very "far from home" indeed — at least from the viewers' perspective.

There's also a literal interpretation of the title that's already been confirmed. The film, at least partly, will take place in London, meaning Spidey will be taken far from his home of New York. "We film in London. We shot first film in Atlanta. And we shoot a lot of films in London but there’s another reason we’re shooting in London which is, yes, Spidey, of course, will spend some time in New York, but he’ll spend some time in other parts of the globe," Feige told io9 in April.

Spider-Man: Far From Home could mean several things. It certainly means that Peter Parker will be spending some time in Europe, but it also may imply that Spider-Man — as well as the rest of the MCU heroes — are no longer in this dimension. And if that's the case, then Spidey is indeed going to very far from home in his next film.