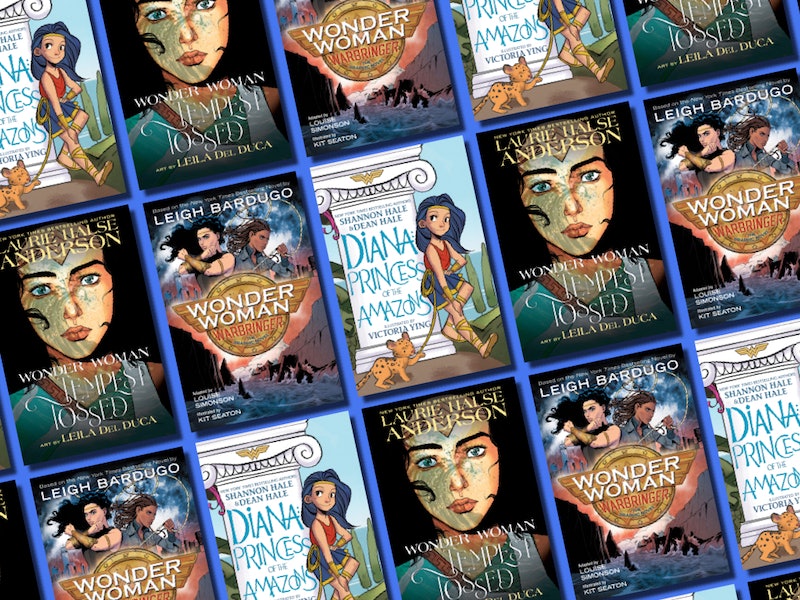 The 2017 Wonder Woman film starring Gal Gadot in the title role introduced many newcomers to DC Comics superheroine's backstory. Raised among the Amazons on the island of Themyscira, Diana is the daughter of Queen Hippolyta. Unlike her mother and sisters, however, Diana was born, meaning she did not spring into the world fully formed and conscious. This has always made the young princess a bit of an outsider among her people, but Diana doesn't fit in with the humans who live outside of Themyscira, either.

Bustle sat down with Anderson, Hale, and Simonson to talk about Wonder Woman's appeal, both to themselves and to their audiences, who may be experiencing Diana's story for the first time ever. Here's what they had to say about writing Wonder Woman for a new generation:

Let's start from the beginning...

Laurie Halse Anderson: I remember my first Wonder Woman comic. I had been reading Casper the Friendly Ghost and Richie Rich and Archie, [and] then we had Wonder Woman suddenly on television as Lynda Carter. I was blown out of the water... I wound up with a full-size Lynda Carter poster of Wonder Woman on my closet door when I was about 10 years old, and I haven’t stopped worshipping her since.

Shannon Hale: I was exposed to her through the Lynda Carter television series [too]. It came on at 4 p.m. every Sunday, and my sister and I would rush home from church and turn on the TV to watch Wonder Woman. I remember the Christmas I got the Wonder Woman Underoos, and I was either not aware or did not care they were supposed to be underwear. I would have worn them anywhere and everywhere.

I adored how powerful I felt. [When] you’re a little kid, you [feel like you] have zero power ... But I’d put on my Underoos and spin around and turn into Wonder Woman like Lynda Carter and I just felt mighty and capable.

LS: I think that power, the ability to put on a cloak of power, is something I totally identify with ... For kids who watched Wonder Woman and then became Wonder Woman, it was just such a blessing. Isn’t it wonderful to just be able to put on this mantle of power?

SH: I think having stories about powerful women, and then playing to embody them as a child, and writing or reading stories about them as an adult — all of that just increases possibilities. When we don’t have these amazing female heroes around us, I think it’s harder for girls to imagine that they can be powerful, and they can do things.

LHA: It’s so important, too, for boys to see women and girls as having the potential to be heroes and superheroes.

SH: There are so many great comics about Wonder Woman, but not all of them are accessible for younger kids. So what we got to do is jump in and tell a story about Diana, before she’s Wonder Woman, when she’s 11 years old [and] she’s the only kid in the world living on Themyscira, and really deal with her honestly. What would she be like at that age? What would it be like for any kid to be the only kid in the world, and everyone else you know are ageless, immortal, amazing warriors. It’s a very relatable feeling.

We didn’t feel like we had to adapt her for a younger audience in any way. We just had to tell a true story about that character at a different time than [when] we normally see her.

LHA: I started thinking about being the only teenager, and not having anybody else to explain to you why one day you didn’t have breasts and now you do. One day you didn’t have hair under your arms and all of a sudden, boom, there it is. And then I thought about, what do today’s teenagers care about in our world, and what would strike Diana as being sort of the great injustices, seen through her eyes, as a 16 year old.

LS: I’ve actually adapted Leigh Bardugo’s Warbringer into comics. It’s Diana’s steps from her world, which is women warriors, into the real world, our world, to try to right a wrong and save lives. It’s kind of a metaphor for the challenges that young women face as they move from a world that’s family into a larger universe.

There's some pressure when adapting a legend...

LHA: I felt a responsibility to all the [Wonder Woman] creators who came before me, as well as to generations of readers. Sometimes it’s good to feel that weight.

SH: I’ve seen how some fandoms can be very unwelcoming to women creators and can be hard on people they feel like aren’t dealing with established characters correctly. But I had an amazing experience [writing for Marvel's Squirrel Girl] ... I think that gave me a lot of courage with Wonder Woman. As long as I am coming to her story with respect and love, then I didn’t have to write in fear of how it was going to be received.

Diana can still teach us a lot...

LHA: [Wonder Woman] could teach us that women can lead nations. That would be a start. Her mother certainly led her nation.

LS: It never hurts to reiterate that women are strong, interesting people. Their voices need to be heard like everyone else’s voices.

SH: Whether anything she says or does feels like a lesson to anybody, I think that just being there, being herself, being a woman, being a hero, that’s enough right there.

LS: One of the things I find inspirational about Wonder Woman, is her willingness to do her best against overwhelming odds. Coming up against something that looks like it’s impossible to conquer, and yet finding a way to get through it and to win out.

Being your own Wonder Woman...

SH: For me, at her root, Wonder Woman is a woman who cares about justice, and is incredibly powerful, and chooses to use that power to make sure that those who can’t stand up for themselves, or protect themselves, have somebody on their side.

LHA: There have been a couple of points in my life where I had to face something where I just wasn’t sure I had it. I can’t even phone a friend, there’s no phone, what do I do? This is why we all need heroes, right? We all need to have those stories of that constant cycle that we all go through, of coming up against the hard thing, doubting ourselves, diving deeper into who we are, and then rising to the occasion. [Wonder Woman] helped me learn how to do that.

SH: She’s also a hero that hasn’t had to go cold and emotionless in order to be powerful, and I think that often, we mistakenly equate power with emotionlessness, with a lack of empathy. “I don’t care what anybody thinks; I’m going to do whatever I want.” We think that’s power. But I disagree, and I think it’s very powerful to feel — to feel love, to feel regret, to feel sorrow — and to still try to do the right thing.

Shannon and Dean Hale's Diana: Princess of the Amazons and Wonder Woman: Warbringer by Louise Simonson are available now. Laurie Halse Anderson's Wonder Woman: Tempest Tossed is out in June 2020 and is available for pre-order today.