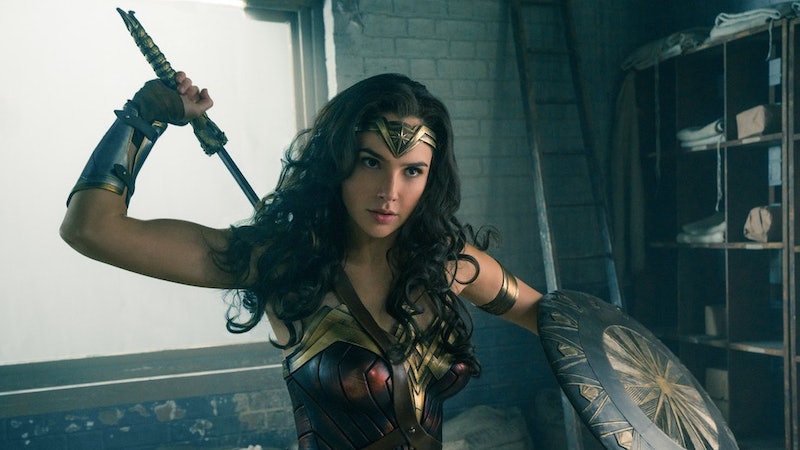 Grab your Walkman and fanny packs: The new Wonder Woman 1984 trailer is here and filled with '80s imagery. The first trailer for Wonder Woman 1984, the highly-anticipated follow-up to 2017’s Wonder Woman, debuted on Sunday, Dec. 8 after a Twitter livestream panel with director Patty Jenkins and star Gal Gadot from Brazil’s 2019 Comic Con in São Paulo. The film, in theaters June 2020, will follow Wonder Woman (Gadot), otherwise known as Diana Prince, as she squares off against the villainess Cheetah (Kristen Wiig), also known as Barbara Minerva in the comics. In the trailer, fans get a glimpse of the ‘80s setting with a mall that invokes Stranger Things’ Starcourt Mall, nostalgic tracksuits, and vintage TV screens.

While the first film took place in 1917 during World War I, Wonder Woman 1984 will take place amid the “beauty and turmoil” of 1984 at the end of the Cold War, as per Jenkins in a Vanity Fair interview. In the trailer, viewers get a glimpse of villain Cheetah and, yes, Steve Trevor (Chris Pine) appears on screen. Steve was presumed dead in the first film after his plane exploded, so the details of his resurrection will surely be explored in 1984.

Along with Wiig and Pine, Narcos star Pedro Pascal also makes an appearance in the trailer as villain Maxwell Lord. In the comics, Maxwell uses his mind control powers to manipulate Superman into believing Wonder Woman and the rest of the Justice League are his enemies. Robin Wright will also reprise her role as Antiope.

While excitement has built around the follow-up film, Wonder Woman 1984 producer Charles Roven has reiterated that Jenkins doesn’t consider 1984 a sequel. “She was just determined that this movie should be the next iteration of Wonder Woman but not a sequel,” Roven told Vulture in March. “She’s definitely delivering on that. It’s a completely different time frame and you’ll get a sense of what Diana-slash–Wonder Woman had been doing in the intervening years. But it’s a completely different story that we’re telling.”

Still, fans can expect the film to deliver. At Brazil’s Comic Con over the weekend, Gadot revealed she cried after she watched 1984 for the first time. “It was the very first cut, the very first director’s cut,” she said in a clip. “I forgot it was me… even though I shot the whole movie and I read the script a million times and we did it and filmed it for eight whole months. And all of a sudden, seeing all the puzzle pieces coming together and seeing this huge, grand… I called Patty crying. I had an even bigger reaction than I did for the first one.”