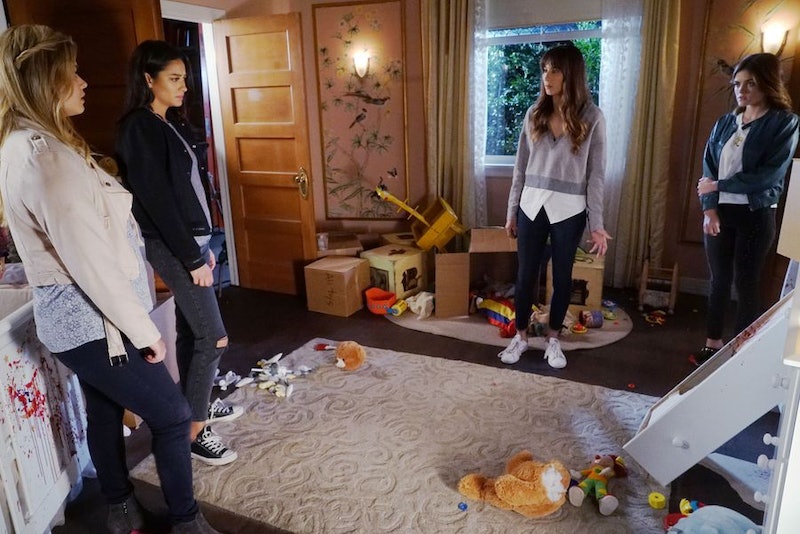 I am not emotionally prepared for the Pretty Little Liars series finale in any way, shape, or form. Nevertheless, it's rapidly approaching and in less than a month, fans will bid goodbye to the Liars & Co. With just four episodes left, there are still myriad unanswered questions. Who's the father of Emily and Ali's baby? Has Aria really gone to the dark side? Who is Beach Hottie? (I jest — that mystery will never be solved.) But, all jokes aside, it's time to double down and focus on Pretty Little Liars series finale theories — from the fan favorites to the totally far-fetched.

Of course, A.D.'s identity is the main mystery fans are clamoring to solve. But, his or her motive remains unclear — and one theorist has even suggested that the Big Bad may be trying to help the Liars in a twisted way. Another key piece of the puzzle is how and why so many individuals are currently playing the A game. I mean, high school ended a while ago so there has to be something bigger at play than old grudges.

Here are four theories about what will happen in the series finale on June 27.

This is arguably the most popular fan theory out there — but it's gained major traction for a reason and the clues have been present for many seasons. From Veronica's offhand comment that, "I didn't know who would come down to breakfast, you or your evil twin" to Spencer's dream sequence of a child who looks a lot like her dancing at Radley, it would be a major surprise if Spencer doesn't have a twin.

Like many fans, I'm on board with the theory that Bethany Young is Spencer's twin and Uber A. We've never seen Bethany's face as a teen or adult (unless, of course, she was masquerading as Spencer during Hanna's "dream sequence" or that recent airport scene), flashbacks have shown that she called Jessica "Aunt Jessie," and Tyler Blackburn told US Weekly that viewers have "kind of" met Uber A.

Deaths are a dime a dozen in Rosewood, so it seems highly likely that there will be a major character death in the finale. As it turns out, Uber A has some serious art skills and was last seen drawing a grave with the words "Here lies..."

The hosts of Bustle's Pretty Little Liars podcast Taking This One To The Grave suggest that (*sob*) Ali will be the person in the grave for real this time. As much as I don't want this theory to come to fruition, it makes a lot of sense — after all, everything always comes back to Ali. So, the reformed mean girl's death would bring the show full circle in a seriously dark manner.

3. Mona Killed Charlotte — And She'll Die In The Finale

In the most recent episode, Mona expressed that she was hurt, frustrated, and angry that the Liars don't trust her and she'll never be part of their inner circle. Reddit user YouStupidCow suggests this was a major clue. In this theory, Mona killed Charlotte because Charlotte pressured her to pick up the A game again upon her release from Welby. Mona refused because she didn't want to hurt the Liars, a physical fight ensued, and Mona ultimately pushed Charlotte from the bell tower.

This would help explain why she's so deeply hurt that the Liars continue to shut her out. The user suggests that Mona will die in the finale in one last attempt to save the Liars and prove her loyalty.

This is the most far-fetched theory out there, but I'm not ruling anything out. Redditor PP8900 has the controversial opinion that the board game is evil but not entirely evil. "What if the game isn't so much a punishment as it is a way to test the girls and bring out the best in them?" the user suggests.

For example, Spencer's first task was to visit Toby in the hospital — which is probably something she should have done anyway. As for A.D. totally messing up Hanna's business meeting? The Redditor suggests that Hanna's turn wasn't about the business deal at all, but about forcing her to choose between her career and Caleb. The reason they broke up during the time jump was because Hanna always put her job first, so in theory A.D. could have saved their relationship from falling apart again for the very same reason. (Not that any woman should have to choose between career and love.)

But isn't impregnating Ali with Emily's eggs taking things way too far? The theory posits that A.D. is indeed evil — just maybe not as evil as we originally thought. The pregnancy did make Ali come to terms with her love for Emily, so perhaps the villain is testing the Liars' strength of character. Although that's still seriously messed up.

I'm not sold, but this would be one heck of a twist. In less than a month, we'll finally have our answers.