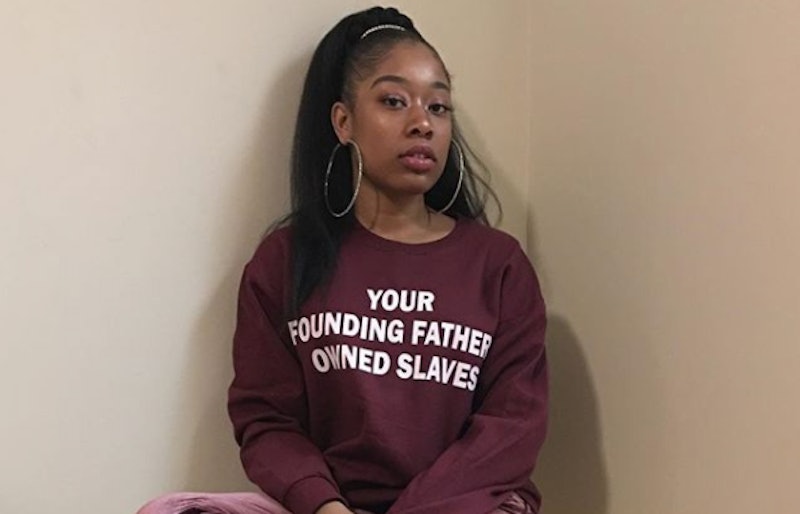 In an intense political climate where institutional racism is still very much an issue and the Black Lives Matter movement is in full force, activism of all kinds is on the rise. For Etsy shop owner Olatiwa Karade, her way to take a stand against social injustices is to create pro-black sweatshirts. And they are quickly going viral.

Let's be honest. Karade's jumpers are not for the faint of heart. These khaki, maroon, and black sweatshirts feature some powerful verbiage. They are the kind of statements that many within the black community are already thinking, but may not be expressing quite as bluntly. The garments are bold and unapologetically pro-black — and so, so real.

For the 19-year-old, New Jersey native, it's apparel she hopes will rebrand "radical" activism, removing the negative connotations from a word that is generally associated with aggression.

"Pro-Black, Anti-Bullshit", "Don't Touch My Culture", and "Reparations" are just some of the phrases you'll find on Karade's jumpers, which are sold on her Splendid Rain Co. Etsy shop. While the slogans may be causing a stir, the constant "sold out" stamps are proof that Karade can hardly keep the sweatshirts in stock.

The virtual shop owner has recently restocked her line of controversial crewnecks — but their viralness means that probably won't last for long.

After becoming involved in political activism during the 2016 elections, Karade's powerful sweatshirts were born. The changing political climate and election results showed the college student how negative attitudes towards marginalized people were in the U.S. Having experienced prejudice herself, she felt inclined to take a stand and put her beliefs proudly on display in the form of badass clothing.

"I was livid, day in and day out at the hateful actions committed," Karade tells Bustle. "I found myself being mad at myself for being mad. As a coping mechanism for my internalized misogynoir, I projected my anger onto soft, beautiful, glittery sweaters, surrounded myself in flowers, and reminded myself I have the right to be angry."

Kicking her shop off with nearly a dozen designs, Karade created sweatshirts that spark conversations about race.

One jumper calls for compensation for the wrongs committed against the Black community.

Another goes against the historical falsehood that Columbus 'discovered' America, painting the explorer as a murderer rather than a hero. It's woke on a whole new level — which may explain why it has been Karade's most popular design.

"I think this speaks to the frustration of history being re-written to paint racist, genocidal rapists as heroes because they are white men," Karade says. "We owe it to the peoples who suffered at the hands of Columbus to acknowledge that he was a horrific man who destroyed peoples and cultures."

There's even a design that clears up geography once and for all. Yes, Africa is indeed a continent.

Displaying microaggressions against blacks unapologetically is getting the crewnecks a ton of attention — but also critics.

"I expected to encounter a lot more negativity," Karade says of the positive response and messages of support she receives regarding her clothing. "Of course there is always some, but I am so pleased to be having such an amazingly wholesome experience."

Not your average pullover, this version is causing a ton of chatter. It may be super blunt, but its boldness speak volumes.

Although they're all so good, it's hard not to have a favorite. Even Karade has her go-to within the bunch.

"My personal favorite sweatshirt is 'Pro-Black, Anti-Bullshit.' I feel as though it’s the most vocal sweater out of the set," Karade explains. "Pro-blackness is a collection of thoughts and ideas, and it moves to preserve and better the lives of black people. That doesn’t make it anti-white. That makes it anti-racism, anti-prejudice, anti-oppression, and anti-bullshit."

Say it one more time for the people in the back.

In light of the unstable political climate, frequent social injustices, and constant protests, this is the kind of apparel society needs to see. It's clothing Karade hopes will normalize the idea of pro-blackness.

"Pro-blackness shouldn’t be controversial," she says. "It’s about the betterment of the conditions of people of color, and that should be the norm. People of color are often expected to silently persevere through violations of our human rights. I think it's time for us to get bold back."