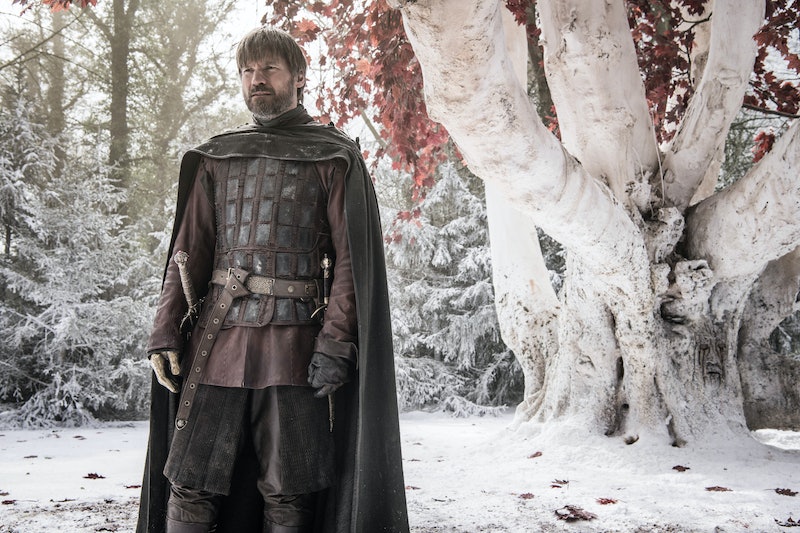 This article contains spoilers for Season 8 of Game of Thrones. With the Night King about to arrive in Winterfell for the biggest battle the Seven Kingdoms has ever seen, everything is riding on Bran's plan to save the North. While fans will have to wait to see how things unfold on the next episode, the meaning of the Weirwood tree in Game of Thrones means Bran's strategy might work.

In the second episode of Season 8, Bran (Isaac Hemsptead-Wright) unveiled his plan for defeating the Night King when the White Walkers arrive in Winterfell with the intent of destroying all of Westeros. Because Bran says the Three-Eyed Raven is the Night King's highest priority — after all, if the Night King kills the Three-Eyed Raven, he also manages to destroy the entire history of the Seven Kingdoms — he proposed using himself as bait to draw the Night King out. In order to do so, Bran will wait by the Weirwood tree in Winterfell's Godswood, alongside Theon Greyjoy (Alfie Allen) and the Iron Born.

"He's tried before, many times with many Three-Eyed Ravens," Bran said, explaining that the Night King won't be able to resist an attempt on Bran's life if he's waiting out by the Weirwood. But his plan isn't just a plot to draw the Night King out and away from his army; it's also tied to the origins of the White Walkers themselves.

According to IGN, viewers discovered in Season 6 that the White Walkers were made by the Children of the Forest, who bound a man to the Weirwood tree and plunged a piece of dragonglass into his heart, turning him into the Night King. Therefore, the outlet theorized, Bran could be planning to kill — or have Jon kill — the Night King by recreating that moment, thus reversing the original curse that turned him into an ice cold, bloodthirsty snow monster.

Of course, things on Game of Thrones are never quite as easy as they seem, so it's entirely possible that if Bran's plan is successful, it would only kill the Night King, and not the rest of his army.

This new Weirwood theory is somewhat similar to another one that The Verge proposed after the Season 8 premiere, which posited that because the Weirwood Tree was used to create the White Walkers, the Army of the Living could use the bark and wood from the tree to create weapons that would destroy them.

However, some fans think that Bran's plan to use himself as bait will be unsuccessful in either case, and that the Night King won't actually show up at the Battle of Winterfell. Reddit user qp0n, because his goal is the destruction of all Seven Kingdoms, and not just the North, the Night King could likely take King's Landing while the Army of the Living is busy fighting at Winterfell, and unable to stop him. That theory wouldn't be completely unreasonable, as qp0n points out that Bran had a vision of the throne room being destroyed and a dragon's shadow flying over King's Landing back in Season 4, and the Night King now has possession of Dany's dragon, Viserion.

Regardless of what happens at the Battle of Winterfell — and whether or not Bran's plan to lure out the Night King is at all successful — the Three-Eyed Raven's connection to the Weirwood definitely hints that it will play a major role in taking down the White Walkers. After all, Bran knows a lot more than he ever lets on, so he's likely seen all of the possible ways his face off with the Night King could play out.