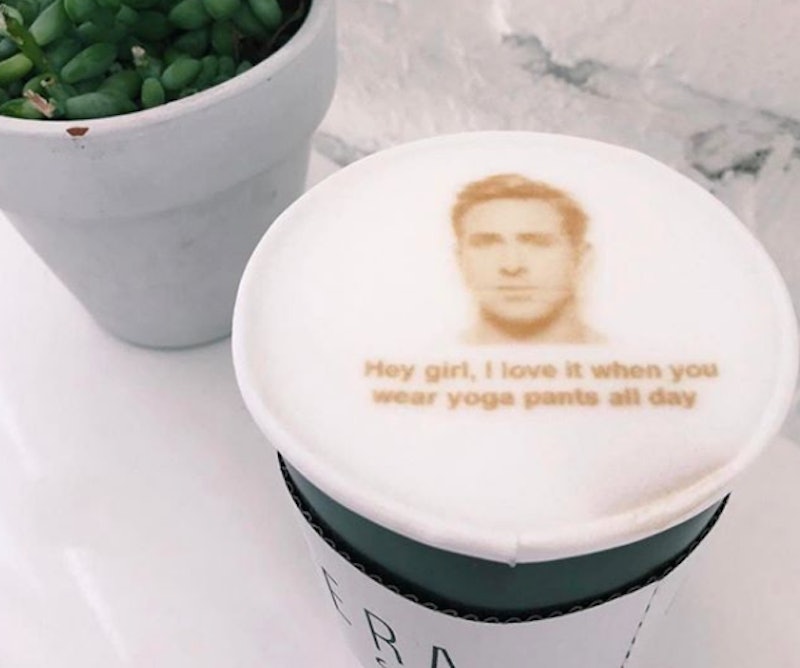 Have you ever looked at your latte and thought, “Hmmm. You know what? This drink, it is just not exciting enough for me”? Are those cute little latte art leaves just not cutting it for you anymore? Good news: Ryan Gosling lattes are a thing now. No, not lattes made by Ryan Gosling; I mean lattes adorned with Ryan Gosling’s face. Because nothing says “true love” like draining an image of your beloved’s visage from an espresso-based beverage topped with foamed milk. Am I right? Of course I am. It’s absurd and magnificent and kind of exactly what I need from my daily coffee habit.

Alas, I’m going to have to wait until the next time I head out west in order to get one, because the lattes are made by a coffee shop, deli, and market in Los Angeles. Located at 8251 Melrose Avenue, Carrera Café is “a charming European-style café with delicious salads and Italian subs,” according to its website. It’s also apparently full of “fine espresso based drinks and lovely people,” so, y’know, hoorah for that. They’re well-known for their elaborate lattes, which can feature not only Ryan Gosling’s lovely mug, but also inspirational quotes, iconic landmarks (hi there, Eiffel Tower), selfies, and, well, pretty much anything you can imagine.

So: How do they make such intricate designs? Answer: Not by hand. According to Los Angeles Magazine, the lattes are made with a Ripple Maker — a fancy schmancy machine that essentially prints designs on top of lattes using coffee extract as the “ink.” You can either use an image in the Ripple Maker’s extensive library (which, apparently, is updated regularly), or you can make a custom design using the machine’s accompanying app. For the curious, here’s what it looks like in action:

Alas, Ripple Makers are not currently available for the average consumer to purchase; according to the Ripples website, “The Ripple Maker is currently available for venues that serve specialty coffee in the U.S., Canada, Turkey, Brazil, Korea, Singapore, China, Hong Kong, and Taiwan.”More countries are on the way later in 2017, but if you were hoping to stock your home coffee bar with one of these babies, you might be out of luck for the time being. Also, it’s worth noting that the Ripple Maker doesn’t actually make coffee; it just makes pictures on coffee.

If Carrera’s Instagram is anything to go by, the Ryan Gosling latte design debuted in April; each latte features not only the actor’s face, but also a “Hey, girl” caption playing off of the now-infamous Gosling meme.

The “Hey Girl” meme is ancient by internet standards; according to Know Your Meme, it dates all the way back to December of 2008, when it became the subject of the single-topic Tumblr F*ck Yeah! Ryan Gosling. Although Jezebel featured it in a post in January of 2009, it didn’t fully enter the mainstream until December of 2010, when MTV asked Gosling to read a bunch of the “Hey, girl” captions for which the meme is known during an interview. While it’s true that many of us have kind of burned out on it by this point, you do have to give the meme a hand for its longevity; even people who aren’t super up on the meme scene are often familiar with it (or with its feminist cousin, Feminist Ryan Gosling).

Not a Gosling fan? No worries; you can get a wide variety of other famous folks on your latte at Carrera, too. How about a coffee break with John Krasinski as Jim Halpert?

Or with Tom Holland as both himself and Spider-Man?

Gavin Rossdale even stopped by and got a selfie latte for himself once:

And if you’d rather keep your latte celebrity-free, thereare a massive amount of other designs available. The “Good Vibes Only” latteseems to be quite popular, popping up on Carrera’s Instagram page over and overagain; maybe the hope is that by drinking a latte emblazoned with the words “GoodVibes Only,” we can actually digest said good vibes and make them part of ourwhole beings? Or… something?

In any event, speaking of lattes, it’s about time for me to go get a refill on mine. If you’ll excuse me, I have some (regretfully Gosling-free) coffee to fetch.