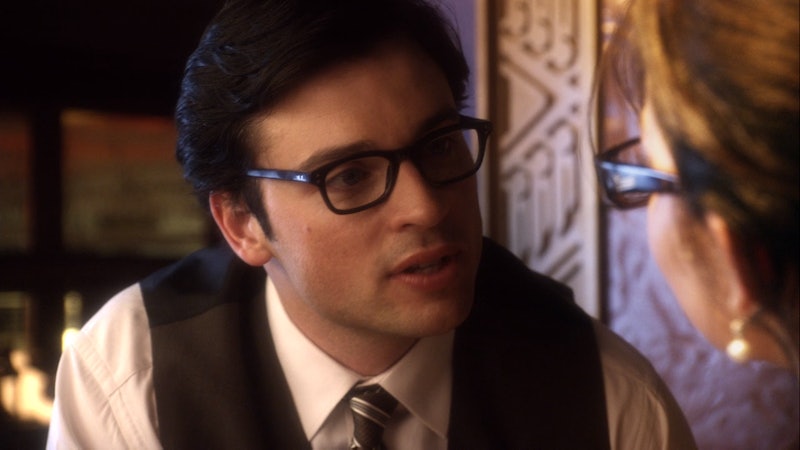 A crisis that crosses multiple universes doesn't sound like something to celebrate, but Erica Durance's Smallville reunion photo suggests the upcoming Arrowverse crossover won't be all drama. On Sept. 29, Durance shared a photo of herself alongside Tom Welling presumably on the set of the Arrowverse's "Crisis on Infinite Earths" crossover event, which began filming this week, as reported by TVLine. The big event will include episodes of Batwoman, Arrow, Supergirl, Legends of Tomorrow, and The Flash, and it's set to feature other DC favorites as well, including Durance and Welling, who will reprise their roles as Lois Lane and Clark Kent from Smallville.

The photo appears to take Durance and Welling back to their characters' roots on the Kent farm. The two are seen smiling in front what looks to be a barn, and Welling is rocking classic Clark plaid. The actor captioned her photo, "So, I was just minding my own business, and I ran into this guy @tomwelling #Smallville #crisis #loisandclark. Laughed until I cried! So much fun."

Smallville ended its 10 season run in 2011 with a finale that included a glimpse seven years in the future. In the flash-forward, Lois and Clark were married, and for the first time in the series, he took flight as Superman. It's unclear what the characters have been up to since then, but per TVLine, the crossover event promises to "reveal what happened to Clark Kent almost 10 years" after the finale.

It's been a while since fans saw Lois and Clark, but thankfully, Durance and Welling have been keeping busy since their Smallville days. Welling recently had a recurring role on the Fox and Netflix series Lucifer, and as reported by Deadline, he's currently working on the Scandinavian series The Professionals, which co-stars Brendan Fraser. Meanwhile, Durance has been playing a completely different role in the Arrowverse: she stars as Kara Zor-El's mother on Supergirl.

Durance and Welling's reunion will take Arrow back to its roots as it prepares to air its own finale in 2020. Arrow executive producer Marc Guggenheim credits Smallville's legacy for paving the way for the current success of the DC universe on The CW. In a statement to TVLine, he said, "For eight years, Arrow has stood on the shoulders of Smallville. Simply put, there would be no Arrow, and no Arrowverse, without it. So when we first started talking about 'Crisis on Infinite Earths,' our first, second and third priorities were getting Tom to reprise his iconic role as Clark Kent. To say that we're thrilled would be a Superman-sized understatement."

Interestingly, Welling won't be the only person playing Superman in the crossover event. Tyler Hoechlin and Brandon Routh will be suiting up to play the iconic role as well. "Crisis on Infinite Earths" will find the Arrowverse heroes dealing with a potentially catastrophic event that will have repercussions across the multiverse, and as a result, multiple versions of the heroes will be affected.

The five-part event will begin on Sunday, Dec. 8 with Supergirl, and continue that Monday and Tuesday on Batwoman and The Flash, respectively. There will then be a month break before the storyline wraps up on Tuesday, Jan. 14 in back-to-back episodes of Arrow and Legends of Tomorrow. It's unclear at this point which episode will include the Smallville reunion, so fans of The WB series should prepare to tune in to all five installments, because the chance to see Lois and Clark again is just too good to miss.