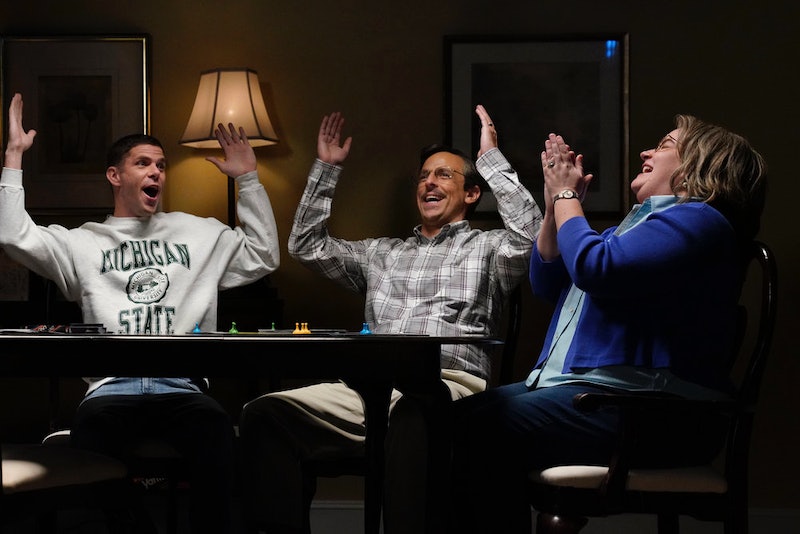 Saturday Night Live is meant to make you laugh, and it typically succeeds. It wouldn't have gone on this long if it didn't. But the tricky thing is that the actors and comedians in charge of acting out these crazy scenarios aren't supposed to break a smile. It doesn't happen live on air too much, though any amount is probably more than the cast members might hope, but these SNL Season 44 bloopers show that it happens behind-the-scenes a lot. Luckily, these bloopers are all from the pre-recorded scenes and skits that go in the show, so the excess laughing can be edited out, but that doesn't make them any less hilarious.

It's rare for SNL to release bloopers, either from pre-recorded video segments or dress rehearsal, so when the Season 44 bloopers were released on YouTube Thursday, June 6, it was kind of a big deal. The nearly four minute video is titled "Creating Saturday Night Live: Season 44 Film Unit Outtakes," and it shows the making of the iconic sketch show, just through the lens of all the laughter that happens when the cameras are rolling.

It starts with cast member Aidy Bryant slapping Pete Davidson too hard in one take, causing both of them to break, and then things just get more outrageous from there. There are quite a few sex scenes where they couldn't keep a straight face and a a lot of prop malfunctions. The Kool-Aid man even fell too, which seemed to cause a bit of chaos on his own. A lot of celebrity guests appear in the bloopers too, like Claire Foy, Halsey, Paul Rudd, and Idris Elba. (But the many faces Kenan Thompson makes as Donald Trump might just be the true stars of the show.)

The most recent season of SNL ended on May 18, so this is kind of just an end-of-the-season treat for fans. And breaking character on SNL happens more often than you might think, with longtime cast members like Adam Sandler and Bill Hader known for breaking on live TV. It can be just a little too hard to keep a straight face when surrounded by so many funny people, but that's oftentimes what can make a sketch funnier. So, fans already knew cast members occasionally broke in the show, but this blooper video proves that they break even more in pre-recorded skits, and it's truly glorious.

One of the most memorable skits where an actor broke during the live scene is the recurring SNL alien abduction sketch with Kate McKinnon, in which she plays a wacky woman giving a description about her highly inappropriate encounter of the fourth kind. Many an actor has broken during those scenes, but McKinnon rarely flinches. Cecily Strong, who's also in the alien abduction sketch, is on of the few SNL members that actually never break, which is just astounding. But even McKinnon struggles to keep it together in the Season 44 bloopers. Who knew that pre-filmed scenes were the great equalizer when it comes to breaking character on Saturday Night Live?