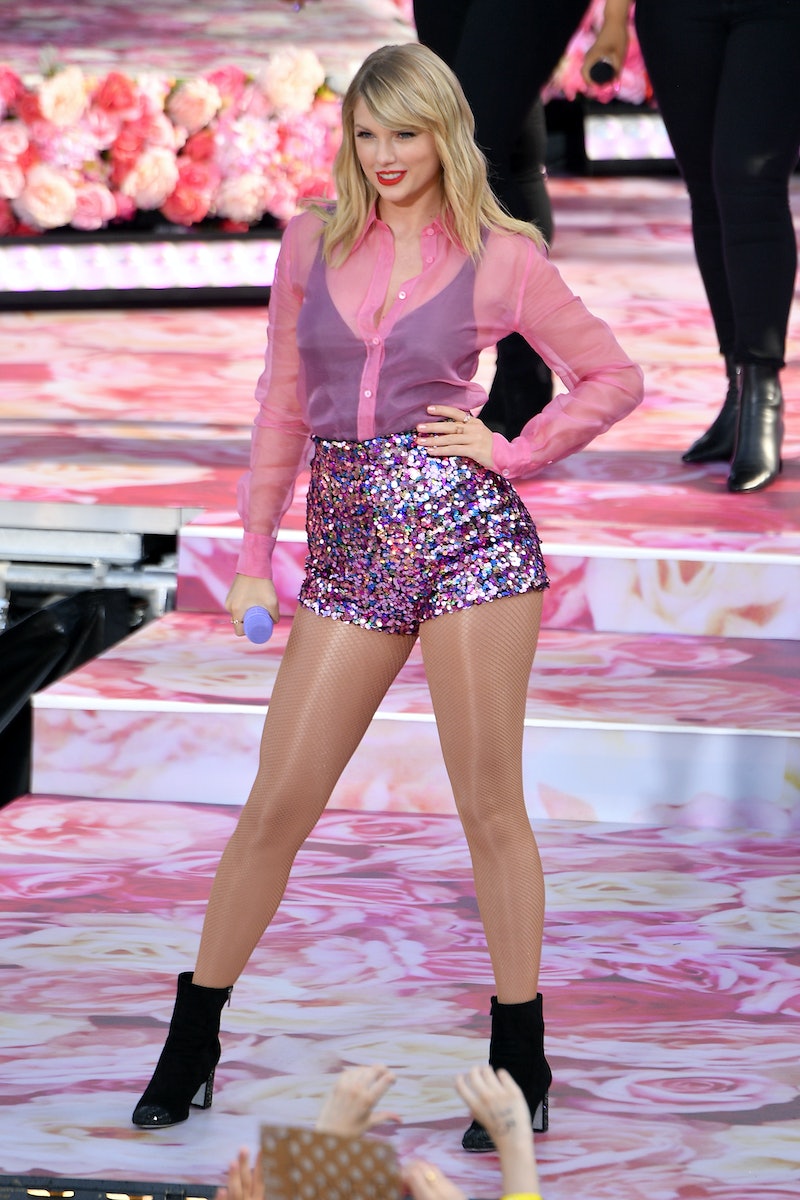 For Swifties, part of the fun of album release day is pouring over the new lyrics, videos, and liner notes in order to uncover all of the Lover Easter Eggs left by Taylor Swift. In the weeks and months leading up to the album's release, the singer dropped multiple references, song lyrics, and small nods to Lover throughout various mediums, and while most of those hints went unnoticed at the time, things are starting to become a lot clearer now that the full album has been released.

Back in May, Swift told Entertainment Weekly that dropping Easter Eggs into all of her videos and social media posts has become a "mischievous and playful" tradition for herself and her fans, and in the lead up to Lover, it seems like the singer was feeling the mystery more than ever. Beginning as far back as April, the singer has released so many hints about her new album that it was impossible for even the most dedicated Swiftie to catch them all ahead of Lover's release.

But now that things have gotten a little clearer, that's where we come in: From the significance of a pin on the jacket Swift wore on the cover of EW to sliding song lyrics into the music video she released just hours before the album, these are all of the Lover Easter Eggs that finally make so much sense now.

According to EW, Swift hand-picked all of the buttons and patches that were worn on the May 12/14 issue of the magazine. While she explained the significance of most of the buttons at the time, the outlet teased that there were plenty of nods to Lover that couldn't yet be revealed — one of which seems to be the Drake button, which is a reference to Swift name-dropping the rapper on the opening track, "I Forgot That You Existed."

According to some clever Swifties on Tumblr, her Mr. Rogers pin, also featured in EW, could have been a reference to "Lover." Her newest single is 3 minutes and 41 seconds long, which some fans think is a reference to 143, which means "I Love You." That sequence of numbers was also very close to Mr. Rogers' heart, and was even explained on the show.

The Red Callback In "Daylight"

The final track on the album, "Daylight" is all about a relationship changing the way that Swift sees the world, and in the bridge of the song, she references several of her older songs: "I once believed love would be (black and white) / But it's golden ... I once believed love would be (burning red) / But it's golden." While the former color scheme might be a reference to "Out of the Woods," the latter is clearly a nod to "Red" and the liner notes of Swift's fourth album.

"Real love shines golden like starlight," the singer wrote in the prologue to Red in 2012, describing the relationship that inspired the album in the title track as "burning red." She promised at the time that she'd write an album inspired by that "real love" if she ever felt it, and it looks like Lover is that album.

Back in March, Swift wrote an essay for Elle magazine, detailing the 30 biggest lessons she's learned in life ahead of her 30th birthday. She ends the piece by writing, "Step into the daylight and let it go," which just so happens to be the final lyrics in "Daylight" and thus, Lover as a whole.

The "Cruel Summer" Lyrics In The "Lover" Video

Just a few hours before the album dropped, Swift released a music video for its third single, "Lover," in which the she and her love interest play board games in their house. Two of the old-fashioned games that flash on the screen feature lyrics from the song "Cruel Summer": "Devils roll the dice, angels roll their eyes" and the game "Breakable Heaven" which appears to be a nod to the line "No rules, unbreakable heaven." Leave it to Swift to slip Easter Eggs into a music video, just under fans' noses. "Cruel Summer" was also the phrase Adam Lambert was tattooing on Ellen DeGeneres in the "You Need To Calm Down" music video.

In addition to the "Cruel Summer" lyrics, Swift revealed the title of one of her Lover tracks a little early, with the Scrabble tiles spelling out "Afterglow" at one point in the video. And while there's no song or lyric on the new album that fits the board game's title — King of Hearts — some fans think that it's a nod to Swift's costar, Christan Owens, who was one of the dancers on her Reputation World Tour. Owens had a solo during "King of My Heart," which could have inspired the title of the board game.

The "False God" Lyric In The "ME!" Video

Sure, fans picked up on the Lover reference and the fact that Swift teased "You Need To Calm Down" soon after the music video for "ME!" was released, but it's not until now that it's clear she snuck another song reference into the clip. In the very beginning of the video, Swift tells Brendon Urie "I can't talk to you when you're like this," which is a line from "False God."

Hayley Kiyoko As "The Archer"

One of the many celebrity cameos in the "You Need to Calm Down" video features pop star Hayley Kiyoko shooting an arrow into a target that has the number "5" on it. While fans thought at the time that it meant a collaboration between her and Swift would be released soon, it's now clear that it's a reference to the fifth track on Lover: "The Archer."

Fans wondered why there was a portrait of the Dixie Chicks featured in Swift's "ME!" music video, and now they have the answer. The iconic country girl group is featured on Lover's "Soon You'll Get Better."

Now that all of these Lover Easter Eggs finally make sense, it's clear that Swift has been teasing her newest album for months. And as clever and dedicated as her fans are, it looks like the singer is still one step ahead when it comes to hiding clues about her music in plain sight. Well played, Taylor.