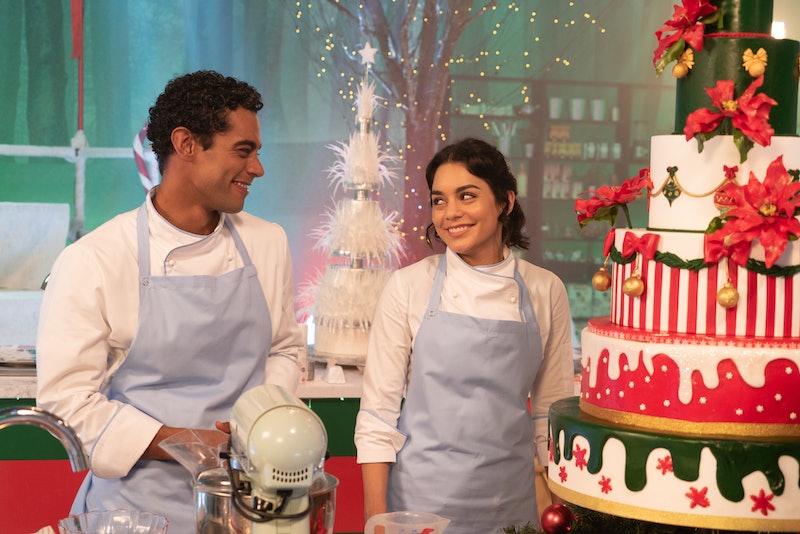 If you're a fan of feel-good holiday movies, you've probably already heard of Netflix's The Princess Switch. The Vanessa Hudgens movie only hit the streaming service on Friday, but based on the number of tweets about it, it looks like it already has plenty of fans. Some of those viewers have spotted mistakes in The Princess Switch and shared them on Twitter — and even die-hard fans will have to admit these goofs are pretty funny.

Spoiler alert: Some of these mistakes give away the ending of the movie, since one of the major errors is in its final scene. So if you haven't watched it yet, you might not want to keep reading, unless you don't care about knowing how things turn out for the main characters. (Although, to be fair, it's not exactly a film that relies on plot twists.) And if you haven't seen The Princess Switch, go watch it tonight, with a cup of hot chocolate in hand. It's a holiday week, for goodness' sake.

As for the mistakes, well, it looks like there were a few times where producers and editors didn't realize exactly what — or who — was in the shot. In the below scene from the end of the movie, there's one moment where Kevin is supposed to be standing with Lady Margaret. But it looks like Hudgens' body double is standing next to Kevin instead — and she made it into the final cut. (The fact that Alexa Adeosun, who plays Olivia, looks confused by the body double being present only makes this one even funnier.)

And it's not exactly a goof, but some people are definitely wondering how Stacy and Kevin made all of the cake batter on schedule without using the stand mixer.

Another not-exactly-goof is when Kevin asks Stacy (who's really Lady Margaret) if he can borrow her toothpaste. It sets up the fact that Lady Margaret is attracted to Kevin — that shirtless moment is definitely memorable — but he'd already been in Belgravia for more than 24 hours at that point. How was he brushing his teeth before this?

And that's not even mentioning the fact that Stacy wore a hat that said "Chicago," just to make sure viewers knew where she was from. Not a mistake — but not exactly true to life, either.

Of course, the mistakes and editing goofs don't make The Princess Switch any less enjoyable. If anything, the film is even more endearing, in a way. The movie isn't trying to be perfect or pretentious — it's just a feel-good holiday film. And plenty of fans have already embraced it, goofs and all.

Between The Princess Switch, A Christmas Prince, The Holiday Calendar, and Christmas Inheritance, Netflix is quickly carving out a name for itself as a producer of feel-good holiday movies. They might not be nominated for any awards, but they're bringing joy to plenty of people, and that's a success in and of itself.