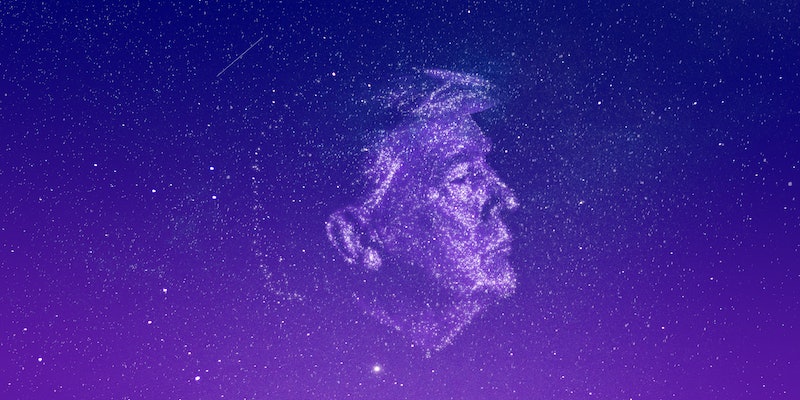 According to the stars, 2018 is going to suck for the Trumps. Three astrologists looked at the Trump family's astrology charts for 2018 and predicted that the sun, the moon, and all the other celestial bodies are conspiring against the first family.

"All the people that he's kind of in cahoots with, they all have very similar charts," says Janelle Belgrave, a New York-based astrologer. "They have similar planets doing certain things. They have a story together."

Overall, the year looks different for each family member. Things look better for Ivanka Trump and Melania Trump than they do for the president or Jared Kushner. But because of their charts and, of course, their family ties, their 2018 fates are all intertwined. For Donald Trump, his Saturn will be in the house that represents children, meaning he could see stress in his life because of his children this year. For Ivanka and Melania, an event that is happening for the first time in 84 years will have them reconsidering if they're really where they want to be in life.

On Dec. 19, Saturn went into Capricorn after being in Sagittarius for the past three years. "That's a big deal because Saturn rules Capricorn," and it hasn't been in Capricorn for 29 years, astrologer Deb McBride says. "Saturn is the planet of karma, and it's the planet of responsibility. It's what keeps us all grounded and in line."

Saturn will stay in Capricorn for the next three years, and while this will affect everyone on earth, it could specifically mean change for the men in the Trump family. Donald Trump, Jr., Eric Trump, and Jared Kushner are all Capricorns. "So, what goes around comes around karmically," McBride adds.

Meanwhile, both Melania and Barron Trump are having their Jupiter return in 2018, says Dayna Lynn Nuckolls, a sidereal astrologer who notes that the sidereal zodiac she uses might be different from the tropical zodiac most people are familiar with. Considering their natal charts, Nuckolls says she wouldn't be surprised if Melania and Barron move out of the White House sometime in 2018. After all, she says, Jupiter is the planet that brings you an opportunity to fix any issues if "you took on more than you can handle."

While those predictions rely on each family member's overarching year-long charts, there are specific astrological events coming up that could mean some of the biggest moments for the Trump family in 2018. Here's when to be on the lookout.

A total lunar eclipse will take place on Jan. 31, affecting Ivanka and Trump in particular. For Ivanka, she will start to really think about who she is as a person. "Her sense of self is going to be under renovation," Belgrave says. "It could be a bit of a crisis period for her."

But for Trump and his family in general, Belgrave says that "more information will start to come out about them" as the eclipses move across their chart. The Russia investigation will be moving swiftly at this point.

Curious as to what could possibly be happening around that time that could bring such big news? Trump gives his 2018 State of the Union address on Jan. 30, one day before the full eclipse, meaning he'll be feeling its power by then.

But the day after the eclipse, on Feb. 1, there is a status hearing scheduled for Michael Flynn, the former national security adviser who has pleaded guilty to lying to federal investigators about his contact with Russia. Fun fact: There was also a lunar eclipse from Feb. 10 to 11 in 2017. Flynn resigned on Feb. 13.

"The thing about eclipses," Nuckolls points out, "is that they occur in cycles."

"The eclipses are really tied into his role in progressing this story."

"I'm definitely expecting that we're going to see something really big with regard to the Russia investigation, with regard to Flynn's role and possibly how far he's going to go with cooperating with Mueller, because the eclipses are really tied into his role in progressing this story," Nuckolls says.

And whatever happens in regards to the investigation may lead Trump to lash out. Belgrave points out that the February eclipse lands on Trump's Mars, often considered the planet of war and conflict. "I feel again there'll be more opportunities for him to act out aggressively and make a mess of things, unfortunately," Belgrave says.

Uranus has a slow transit, and the way it moves through the horoscope means that it stays in one zodiac sign for seven years. This means as it enters Taurus on May 15, it'll be the planet's first time in that sign since 1934. Both Ivanka and Melania may "feel kind of an electrical pulse go through their lives where they'll know intuitively, 'We have to change,' because to not change means to kind of go down with the ship," Belgrave says.

But the way they handle that change will vary. The astrologers agree that while energy will be brought to both of the women, Ivanka, a Scorpio, is likely to resist, whereas Melania, a Taurus, will likely be able to work with that energy a little better.

"So, what's going to happen for Melania — and as the time goes on, starting next year and the year after — she is going to have to really develop something that she can call her own and her own independence and something that where she makes her mark," McBride says. "Something that's hers and hers alone."

Ivanka might be more resistant to change, "because she is so used to things going her way all the time," Belgrave says. But it's her children that might ultimately make her realize "the magnitude of what's happening." Belgrave says Ivanka might think hard about what the Russia investigation means for her children and her family, and then make a change based on that.

McBride adds that Ivanka might have to ultimately stand up to her father, though it'll be difficult for her, considering how closely their charts are connected. But she might ultimately be forced to say "Well, Dad. I don't agree with you," because Uranus will be opposite her Sun sign in Scorpio for the next seven years. "She chooses her battles," McBride says. "Like, 'Am I gonna oppose my father on this? Is it worth it? Or am I just gonna go along with it and keep my mouth shut?'"

End Of June - End Of August

Everyone knows about Mercury retrograde, when the planet appears to be moving backward and everything in your life seems to get out of whack. But other planets retrograde, too, including Mars, and this could have a huge effect on the U.S. come summertime.

"The United States has to be very careful."

Mars is the planet of action and war. And that's exactly what Trump needs to avoid during these two months, McBride says. "The number one thing you don't want to initiate on a Mars retrograde is a war."

Basically, the astrologer warns the U.S. can't get into it with North Korea this summer. Because Mars is the planet of war and it's going backward (or it appears to be), anyone who initiates a conflict is in for a rush of bad luck. "Usually the initiator does not win under a Mars retrograde," McBride says. "So, the United States has to be very careful."

In the middle of the Mars retrograde, there will be an eclipse in sidereal Capricorn, according to Nuckolls. "This is the big one for 2018," she says, and it'll likely coincide with some sort of big news and finances and the economy.

Nuckolls herself is specifically on the lookout for something regarding Bitcoin in late July, but she says "I know without a doubt that there are going to be some serious financial and banking things happening for us in the United States and probably across the world" when this eclipse hits.

The last time an eclipse occurred in conjunction with a retrograde Mars in sidereal Capricorn was in 1971, Nuckolls says, when President Richard Nixon abolished the gold standard. "Overall, I'm concerned about the economy in 2018 in general," she adds. "This is a bubble just waiting to burst."

As the end of the year nears, Venus, the planet of love, beauty, and relationships, will go into retrograde. "It's a time to work things out in your relationship," McBride says, whether that's your marriage or with your colleagues. But remember that old saying, "men are from Mars, women are from Venus"? That just might hold true during the 2018 Venus retrograde.

Nuckolls points to the Jupiter transit during this time and says that Venus will be entering sidereal Libra, meaning justice for women will continue to be a big theme, right during the November 2018 midterm elections. "We're going to see women show up and show out," Nuckolls says.

That could be a big blow to Trump. He's been slowly losing support in legislative seats because of women standing up and speaking out. Recently, black women overwhelmingly voted for Democrat Doug Jones in a critical U.S. Senate race in Alabama. That turnout gave Jones the edge he needed to beat Republican Roy Moore, who has been accused of sexual assault and improper relationships with teenage girls. Moore denies the accusations.

That was a huge loss for Trump, and if that trend of women showing up happens during this Venus retrograde, it could completely change our current political climate. "We've already seen bits and pieces of this right? 2018 is the year of the woman, and it is a force to be reckoned with," Nuckolls says. "All men should be shaking in their tube socks."

The Trump family might be shaking in their socks, too. These astrologers paint a picture of big changes in the first family's lives. And while some of them might make it to 2019 just fine, others could see their whole worlds turned upside down. The universe might have a say in the events that happen, but it's up to each Trump family member to decide how to respond. Will they follow the galaxy's guidance, or resist change and create chaos? We will just have to wait and see.

More like this
The 5 Best Anti-Chafing Sticks
By Lauren Moison
Which Cast Member of 'Westworld' Season 4 Has the Highest Net Worth?
By Meg Walters
These Hidden Gems On Amazon Can Make Your Home Look 10x Better For Less Than $35
By Maria Sabella
The 8 Best Bras For Lift & Side Support
By Jen Fiegel
Get Even More From Bustle — Sign Up For The Newsletter