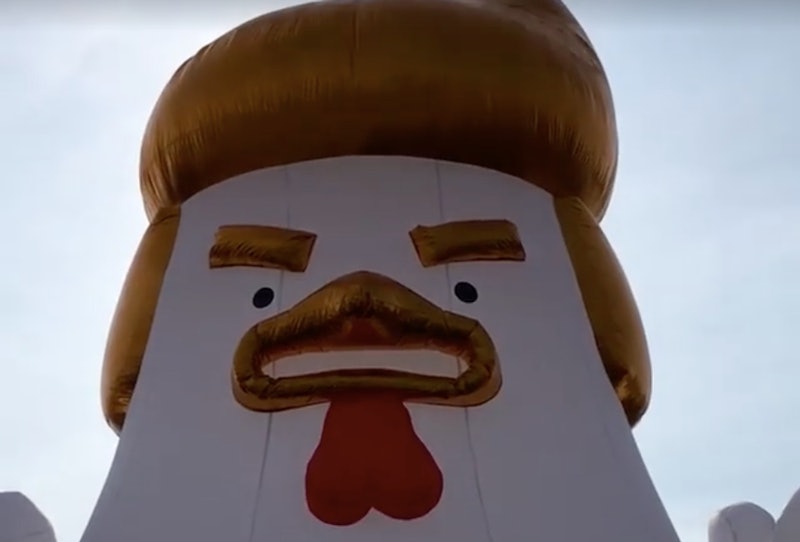 While President Trump "works remotely" at his golf resort in Bedminster, New Jersey, this week, a giant chicken will be keeping a watchful eye over 1600 Pennsylvania Ave. The inflatable Trump chicken outside the White House was first spotted late Wednesday afternoon, and its appearance provided a brief, and admittedly much needed, respite from the onslaught of news about North Korea's nuclear capabilities.

The 23-foot prop — which dons the president's iconic bright combover — was the brainchild of Taran Singh Brar, a documentary filmmaker who, you can probably guess, doesn't exactly have a very high opinion of the President.

"We're here to criticize the president as a weak and ineffective leader," Singh Brar said, according to ABC News. "He's too afraid to release his tax returns, too afraid to stand up to Vladimir Putin, and now he's playing chicken with North Korea."

Singh Brar set up the now-viral symbol, which he affectionately dubbed "Chicken Don," around 10 a.m. on the White House Lawn, where it perplexed and entertained onlookers for the remainder of the afternoon. The Trump Chicken even grabbed the attention of a national audience, with at least one news outlet setting up a Facebook Live stream of the prop's ominous floating.

Needless to say, this is what memes are made of. Here are some of the best Twitter reactions to the nation's newest icon, Trump Chicken.