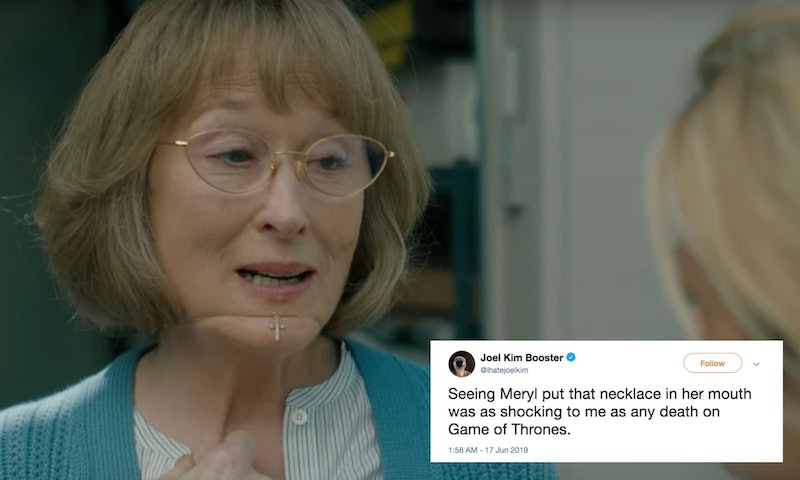 First, there was that iconic scream. Now, Big Little Lies has gifted us Meryl Streep's necklace acting. If Season 2's first two episodes have shown as anything, it's that for Streep's Mary Louise, the devil is in the details.

So far, there are two things we know about Mary Louise, Perry's mother who's come to town to help Celeste with the kids — and maybe to do a little digging herself. First and foremost, she'll stop at nothing to find out what really happened to her son on that fateful night that he "accidentally" fell down the stairs and died. Second, but no less important, she's not a fan of Madeline Mackenzie (Reese Witherspoon). Their interactions thus far have been cordial, yet weirdly passive aggressive, and they're only getting more combative. It's clear that Mary Louise thinks Madeline knows more about her son's death than she's letting on, and it's made her extremely distrustful of her daughter-in-law's short friend.

During the June 16 episode, Mary Louise let Madeline know exactly the kind of person she thinks she is. In delivering her distasteful impression of Madeline, she brought her crucifix necklace to her chin, rubbed it gently, and looked Madeline up and down judgmentally.

It was a moment, and Twitter was rightfully blown away.

Many fans have pointed out that only a GOAT like Streep could throw shade with something as small as a necklace. It was a subtle gesture, but somehow more cutting than any put-down Mary Louise has thrown Madeline's way.

And while it was a (literally) much quieter moment than when Mary Louise screamed at the dinner table in the Season 2 premiere, the subtlety is what made it hit so hard.

Which is probably why viewers are already calling for Streep to win an Emmy for the role. "Meryl knew she had the Emmy in the bag the second she put that cross necklace on her chin," wrote one Twitter user.

Before season's end, we'll probably have an entire list of iconic Mary Louise moments. Her character is still a bit of an enigma, but it's clear she's a force to be reckoned with. On the surface, she's a loving grandmother and a grieving mom who's lost her son, but she also seems to be a little bit... well, off. Whether she's acting out due to grief, confusion, and suspicion of the Monterey Five or she's just always been this way, it's unclear.

Of course, there are still a lot of heavy things for Mary Louise to deal with, including having to reconcile who she thought her son was and who he actually was, now that Celeste has revealed he was abusive. And it will be interesting how she approaches Ziggy and Jane now that the truth is out about Perry. Only time will tell how Mary Louise handles things, and exactly how much she uncovers about Perry's death, but here's to hoping we'll get plenty more meme-able moments along the way to lighten the mood.