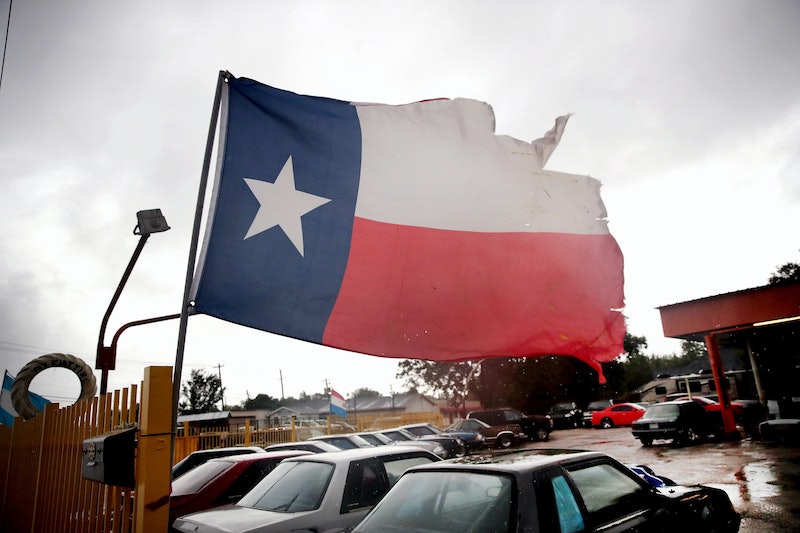 When Hurricane Harvey made landfall in south Texas on Friday, it came ashore as a Category 4 storm with winds up to 130 miles per hour. Over the course of the weekend, Harvey dropped more than 20 inches of rain in cities like Galveston and Houston. The devastation that ensued can be seen in Texans' responses to Hurricane Harvey, with requests for help and messages of support filling social media over the weekend.

Responses to the devastating storm came from across the country. Tweeting from Camp David, the presidential retreat in Maryland, President Trump promised to visit Texas once doing so would not cause "disruption." He praised the response efforts taking place in Texas, but he also received criticism for plugging issues like trade and immigration during the tragedy.

Many Americans across the country sent good thoughts toward Texas on Saturday and Sunday. They looked for ways to help from afar, and some volunteers even packed their bags for the flood zones. In Texas, the messages were much more revealing. People in the path of the storm shared photos and videos of the damage, and some tweeted quick messages about what help was needed.

Many Texans in need turned to social media to help spread the word about their needs. (Please note: The individual who shared this tweet has since updated her followers that her aunt is O.K.)

Stories from the flooded areas set a dismal scene for those on the outside.

Many outsiders wondered why more Texans hadn't evacuated before the hurricane, so they explained.

Residents of Houston were asked to evaluate their level of danger before calling for help.

The destruction from Hurricane Harvey wasn't limited to Houston. Coastal cities like Rockport and Port Aransas were also devastated.

Local law enforcement and administrative agencies shared updates throughout the weekend on social media, informing those in affected areas and onlookers from across the U.S.

Important updates also came from Texas residents themselves, offering up tips about nearby shelters and rescue crews.

Emergency response agencies began warning residents not to seek shelter from rising waters in their attics. Instead, experts advised residents to climb to their roofs.

The powerful storm may have destroyed homes and cars, but it didn't destroy Texans' spirit.

Officials and rescuers remained committed to flood victims, in spite of the dire conditions.

Texans across the state sent good thoughts (and valuable resources) to the affected areas.

The Houston Texans' JJ Watt encouraged his fellow Houstonians to stay strong during the storm.

In addition to the hurricane conditions, residents of the Houston area were also told to prepare for potential tornadoes. The relief efforts that began during the storm on Saturday and Sunday were likely to continue for weeks, and perhaps months. Remember, Texas: Clear eyes, full hearts, can't lose.