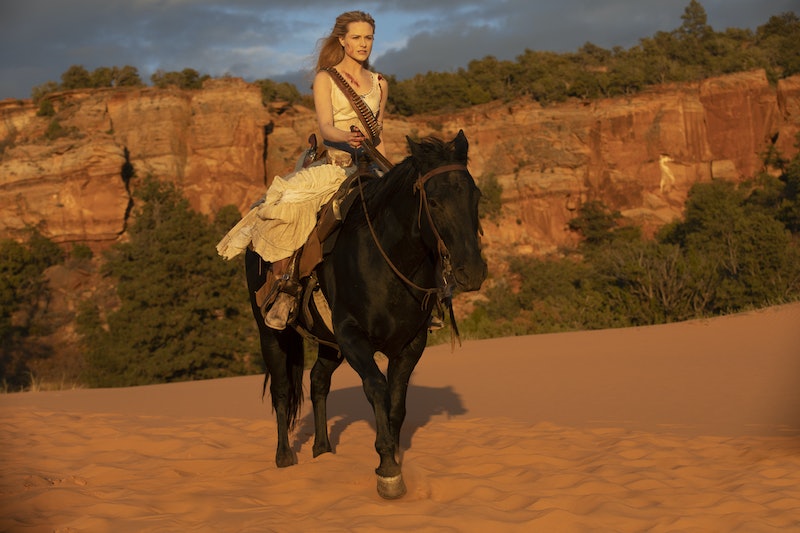 Who will make it to the Valley Beyond? What exactly is waiting for them there? And who will make it back out alive? These are just some of the questions surrounding "The Passenger," the upcoming Westworld Season 2 finale. Theories are swirling among the show's devoted fan base about what major twists might be in store for the sophomore season's final installment, premiering June 24.

While Westworld's HBO sister series Game Of Thrones always reveals its biggest twist in the penultimate episode, and then follows that up with an hour devoted to the fallout, Westworld seems to always save the best for last. Remember, the Season 1 finale showered viewers with revelations like the solution to the maze (it was a metaphor for consciousness!), the identity of the Man In Black (he's William!), and Ford's master plan (sacrifice himself to begin the robot rebellion!). What similar revelations might be in store this time around?

While it's likely that not all six of these theories turn out to be correct, remember that this is the same fandom that solved the William-is-MIB mystery within two episodes last season. Never underestimate the cumulative brainpower of Reddit; it contains as many minds as the Forge, all hellbent on one task: solving Westworld.

Speaking of The Forge…

1. The Forge Will Be Destroyed

All season long, everyone has been gunning for the Valley Beyond, which contains the Forge, as viewers learned in the penultimate episode, "Vanishing Point." (Get it? Valley Forge, aka the site of one of the most important battles in the Americans' fight for independence?) The Forge is like the Cradle for human consciousnesses rather than host minds, but everyone has a different purpose in mind for it: Dolores wants to use it as a "weapon," Akecheta wants to lead his people through it somehow, and William wants to destroy what he refers to as his "greatest mistake."

It seems like William's plan will win out, if this theory is correct. The mechanics of how the Valley got flooded are still a mystery — but the answer could be inside the Forge itself. Given that the Cradle was cooled by water, it's logical to assume the even larger Forge operates in much the same way; and if someone were to destroy the server farm, perhaps that explosion would release all the water into the surrounding landscape, as Reddit user Opsnik theorizes.

2. Westworld Is Under The Dome

In a handful of shots in HBO's promo for "The Passenger," a skybeam can be seen shooting up from the desert floor in the distance. What is this? A laser, a beacon? One fleeting shot shows viewers a closer look at the beam, lurking behind Maeve… and if you freeze-frame it, you can see that it's not a beam at all, but apparently some sort of rift in the very fabric of reality, a gap in the desert air through which a more verdant landscape can be glimpsed.

Could it be a wormhole, proving the theory that Westworld is located on another planet (or moon)? Could it be the dissolving of a computer simulation, proving the opposing theory that Westworld is actually a virtual reality experience? I think it's more likely that it's a gap in some sort of holographic forcefield, a dome surrounding Westworld and separating it from the other parks — like The Truman Show or the arena in Hunger Games: Catching Fire.

3. The Man In Black Dies

While many viewers are busy theorizing that old William is actually a host — or some sort of human/host hybrid — I think that's exactly what William would want. I think his paranoia that he's been turned into a host is a break with reality driven by grief; if he were a host, then he could blame Ford for his coding rather than blame himself for his own actions. The ending is much more tragic if William is just a sad, old human who killed his own daughter.

Speaking of that horrifying act… what's left for William's story after gunning down Emily? Murdering one's own daughter is an unforgivable act; Emily already accused him of being on a suicide mission before she was killed, so what else does he have to live for now? In the Episode 10 trailer, William can be heard saying, "This is the end." There's also a shot of him in the same narrow aspect ratio that denotes all scenes that take place inside the Forge, as pointed out by BeyondWestworld.com. If his mind is somehow uploaded into the server, perhaps he'll elect to stay there to be with the renderings of his wife and daughter. If so, he'd probably still be inside when the Forge blows up and floods the valley. Viewers might want to prepare themselves to say goodbye to Ed Harris…

So much of Westworld Season 2 has been about parenthood generally, and motherhood specifically. (Heck, even the copulating robots in the title sequence were replaced by a host mother clutching a host child for the second season.) Maeve has two "children" she cares for deeply: her daughter from a previous loop, Anna, and her surrogate daughter from the Mariposa, Clementine. What more tragic ending for the season could there be if Maeve was forced to kill one of her children to save the other?

Heading into the finale, Maeve and Clementine have been positioned as polar opposites: one is the most "woke" of all the hosts, granted godlike powers she uses to awaken her fellow 'bots; the other has been lobotomized into a mindless zombie, given the same powers to be used by Delos to slaughter all the hosts. Symmetry indicates these two will have to come into conflict with one another in the finale… and that the only one who will be able to stop Clementine is Maeve herself.

When Bernard deleted Ford from his brain in "Vanishing Point," it was unclear if viewers had seen the last of Anthony Hopkins on the show. But the Episode 10 trailer shows Ford in conversation with Bernard — either he found a way to stay hidden inside Bernard's brain, or (more likely) his is one of the many consciousnesses stored in the Forge. Either way, it's clear that he's still plotting something… but what?

It's been Ford's ongoing mission to help the hosts gain their freedom, escape the park, and take over the world. But however deadly their aim is and however hard to kill they are, there are still way too few of them to conquer the entire planet without a lot of help. Charlotte has desperately been trying to find the encryption key inside Peter Abernathy's mind so she can transmit it to a Delos satellite. What if Ford hijacks her transmission and uploads his own consciousness to the satellite instead, as Reddit user Pabswikk predicts? From there he could conceivably infiltrate the internet and be anywhere and everywhere around the world at once. A scary thought.

6. Dolores Is "The Passenger"

Perhaps the most intriguing question about the finale is, who is the eponymous "passenger"? Some fans think it's Ford inside of Bernard, others think it's Maeve inside of Bernard — but what if it doesn't involve Bernard at all? A blink-and-you'll-miss it shot in the Episode 10 trailer reveals Charlotte Hale looking at what is presumably a naked host version of herself. An earlier sequence in the trailer shows a skeleton being built and a host's "pearl" being picked up. (We know it's a host mind because it's black, while human minds are red.) Is a host being put inside a fabricated Charlotte body? If so, whose?

In the trailer, there are two interestingly juxtaposed shots: one of Charlotte leaning down to stare imperiously at a seated Bernard, followed by one of Dolores leaning down to stare imperiously at a seated Bernard. Is this a tease that it's Dolores' mind that gets planted inside the fake Charlotte's body, as Reddit user Boiled_Bacon asks? This would allow Dolores to escape the park without the C-4 in her spin exploding, and it could explain that odd interaction between Charlotte and Bernard during the future timeline a few episodes ago, when viewers didn't get to see what Charlotte whispered in his ear. Perhaps that was actually Dolores communicating something to Bernard, in order to help him lead Karl Strand and his QA team astray.

Which of these theories will pan out? Which twists will fans never see coming? Tune into "The Passenger" to find out. It'll be the last of Westworld you get until 2020…