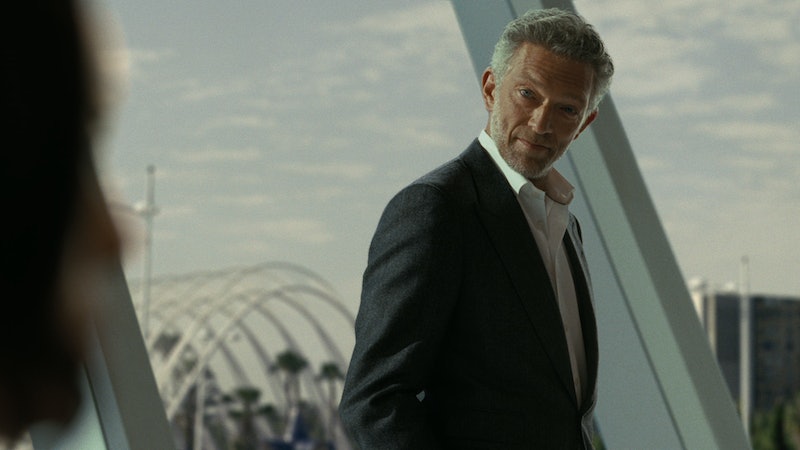 With the recent announcement that Westworld has been renewed for a fourth season, fans can breathe a sigh of relief: any questions introduced in the upcoming finale will eventually get resolved. And if the reams of theories about Serac are any indication, there could definitely be some loose ends. With only two episodes left to go, we still don't know what the Incite head's master plan is or what nefarious motivations he might be hiding, but as always, Westworld fans are determined to stay one step ahead of the writers. Theorizing is like a brute-force hack: most of them will probably be wrong, but through sheer volume and persistence, someone is bound to land on the truth.

So which of the following theories might be right? Let's assess.

The most popular theory surrounding Engerraund Serac is that… he doesn't exist. Maybe he did at some point — Episode 6, "Decoherence," explored his backstory, after all — but sometime between murdering Liam Dempsey and the present timeline, fans think Serac died, and that the man seen interacting with Maeve, Dolores, and other characters is merely a projection of Rehoboam.

Serac is often depicted as a hologram broadcasting his presence from somewhere else. The times he's been seen physically interacting with his environment — like shooting a man in the head in Episode 4 — may have taken place inside a simulation, unbeknownst to Maeve (and us as viewers). Maybe there is no physical copy of his body and Serac only exists as a hologram, assimilated into and projected by the machine he created.

All season long, Serac has seemed one step ahead of Dolores thanks to Rehoboam's predictive capabilities: buying Delos out from under her despite her best efforts to thwart him, discovering Charlotte's true identity, etc. What if he's not just one step ahead of her, but several? Reddit user Mr_Trobot thinks Serac himself may have planned Dolores' rebellion in some capacity, perhaps as a test to strengthen Rehoboam. He previously mentioned to Maeve that he had been "waiting" for the hosts to arrive, and has stated that he doesn't view hosts as the threat to his peace, but rather humanity. What if all of Season 3 is part of Serac's plan to save humanity from itself?

The previous theory posits that Serac has ultimate control over everything happening in Season 3; conversely, this theory posits that he has no control over anything. Reddit user jdbrew thinks that Serac is simply a passenger like all humans; a slave to his own programming; a puppet whose strings are being pulled by the machine he himself created. Rehoboam exists to predict the future and lay out paths for everyone, so maybe it's done the same for Serac — and while Serac thinks he's acting of his own free will, he's simply making the choices Rehoboam has chosen for him. And maybe that doesn't mean saving humanity… but destroying it.

4. Caleb Is Spying On Dolores For Serac

A lot of fan theories about Serac involve a hypothetical connection between him and Dolores' ally Caleb — such as this one by Reddit user username_less, who points out the Biblical roots of Caleb's name. Apparently, in the Bible, Caleb was a spy sent by Moses into Canaan to assess the "strength and numbers of its population." On Westworld, names (like Rehoboam) aren't chosen arbitrarily. If Caleb is a spy, who is he spying for? Flashes of Caleb's past show he's been reprogrammed in one of Serac's "editing" facilities for outliers. Perhaps Serac programmed Caleb to do his bidding without being aware of it.

5. Serac Built Caleb As A Host

Reddit user kiddo4815 speculates that Serac didn't just reprogram Caleb, he created him as a host. A lot of fans already think that Caleb might be a host; this new theory just goes one step further and connects host-Caleb to Serac. Perhaps Caleb died by suicide after killing his friend Francis (purposefully or mistakenly), and a highly-trained soldier who happened to be deceased proved to be the perfect specimen for Serac to experiment on. The memory of his mother abandoning him at the diner could be Caleb's cornerstone, implanted inside him by Serac.

6. Caleb Is The Real Serac

The most out-there theory connecting Serac and Caleb is an extension of the first theory: that the figure viewers know as "Serac" is merely a projection of Rehoboam. If that's true, then what happened to the real Serac? Reddit user imhugeinjapan89 thinks that Caleb is the real Serac, who found out that he was an "outlier" according to Rehoboam's programming and subjected himself to his own "editing" process. Perhaps Caleb's memories of killing Francis are actually Serac's memories of killing his brother. While this seems bizarre and unlikely, it would make a certain amount of thematic sense, setting up a final conflict between multiple versions of Dolores and multiple versions of Serac (the real one and the one projected by Rehoboam).

7. Serac Will Be Humanity's Downfall

While some theories are based on the meaning of Caleb's name, others find their basis in the meaning of Serac's. According to Reddit user giggoly, a "serac" is actually a geologic term referring to a particular formation of glacial ice which can be dangerous to mountaineers, as it can give way suddenly and without warning. By definition, "Serac" is precarious, ready to plunge people into an abyss if it gives way. Perhaps this is foreshadowing that, if and when Serac is defeated, he will bring down humanity with him — intentionally or not. By trying to control the world's fate, maybe he doomed it instead.