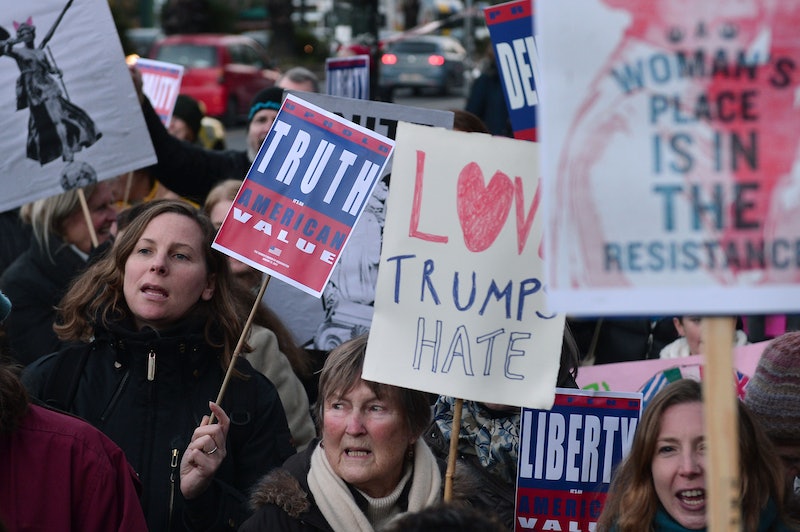 On Saturday, the Women’s March on Washington and its hundreds of sister marches all over the world became as a beacon of hope and resistance for many. Amid the peaceful protest in Riverside, California, two women got engaged at the Women’s March in front of thousands of fellow marchers. It was a more-than-fitting topper for a movement devoted to equal rights, compassion, and an emphasis on love over hate — and the proposal itself was swoon-worthy. Who knew that social activism could be so romantic? UPDATE: This story has been updated to include comment from Marcela Ramirez.

Lissa Stapleton, an assistant professor at Cal State Northridge, and Marcela Ramirez, a PhD student at Univerity of California Riverside, have been dating for three years, after first meeting at a conference in 2006 and reconnecting at another conference in 2013, according to Cosmopolitan. On Saturday, they gathered with more than 4,000 protesters in Riverside for the Women's March. Stapleton served as a chant leader, and Ramirez delivered a keynote address. After giving her speech, Ramirez was shocked when her girlfriend came on stage and launched into a speech of her own.

Of Ramirez, Stapleton told the crowd, “She is loving; she is generous; she is beautiful, bright, hardworking, and feisty. And I am so blessed that God brought me a ‘Ride or Die’ chick. So you are who I have been waiting for my whole life. You are the dream, and you are the One. So will you marry me?”

Ramirez tells Bustle of the moment when Stapleton came on stage, "I thought what is she doing? Then she starts sharing her feelings about me publicly and I thought: is she about to propose to me in front of all these people? Oh my, it's going to happen right now!"

You can watch the proposal in the video below. After Ramirez agrees, Stapleton declares to the onlookers, “Love wins! Love wins every time!” The footage is a little fuzzy, but I can only assume that, at that point, there was mass happy-crying all around. Watch it for yourself — especially the bit around the 2 minute mark when the whole crowd begins chanting “LOVE TRUMPS HATE” to celebrate the happy couple. You might need to grab some tissues for that one.

For Stapleton, the Women's March was the ideal place to propose. "With all of the energy building up to the marches, I knew this would be a really important, special, and sacred day," Stapleton tells Bustle. "People around the world coming together to fight for justice and love. This is a major part of who we are...."

"We made history that day," Ramirez adds. "Our moment to fight for justice and move forward in love sets a tone for our marriage. We are committed to aligning our values around social justice with our actions."

Stapleton also points out that, as educators, she and Ramirez felt that supporting the march was especially important. "We work with college students every day and our lives and what we teach must be congruent," she says. "Being a part of this day and this march was about aligning what we value with our everyday actions. This felt like the perfect day and moment."

Stapleton tells Bustle that it "was really quite amazing" to have all of her and Ramirez's fellow marchers cheering for their engagement. "I hoped the crowd would be loving, but you never know," she explains. "All you can do is put yourself and good energy out there and hope you get it back in return. ... I wanted [Marcela] to feel extra special and loved when I asked her and the Riverside community and everyone who attended did not disappoint. Their energy and love was definitely felt, and we are so grateful they could be a part of our special day."

Ramirez adds, "It was the most joyous day of my life. Strangers came up and hugged us. People were crying. I was overwhelmed with all the love and support from our community."

The Women’s March protests, which brought millions together in solidarity, were an amazing collection of events, but it’s what people do in the months and years to come that will truly make the difference. Trying to think of ways to keep the fire going, post-march? Bustle has you covered.