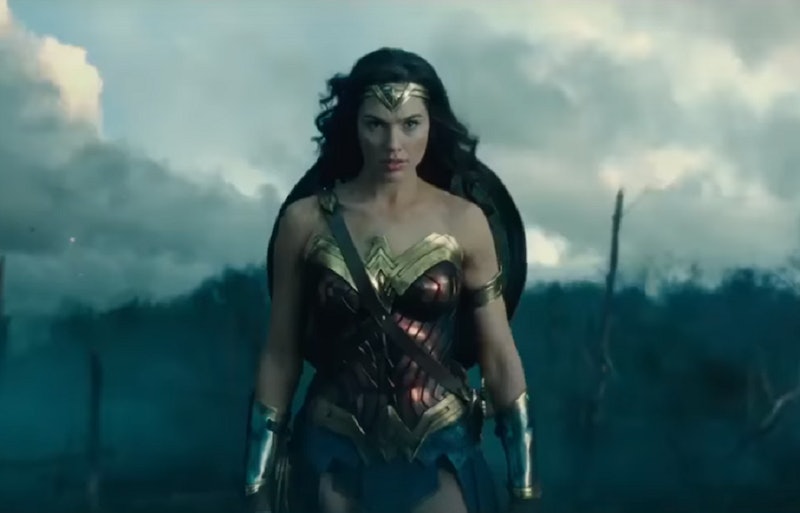 There's no denying that it feels like we've been waiting an eternity for a blockbuster focused on a female superhero. And that's undoubtedly one of the reasons why we should all be excited for Wonder Woman. As a general rule, whether in the Marvel Cinematic Universe, or the DC one, female superheroes have been scarce compared to their male counterparts. Female superheroes have been playing second fiddle to male characters for too long, you guys. This is exactly why my heart just damn near burst looking at the new Wonder Woman movie posters. Their main focus is on the Amazonian goddess, her power, and nothing else.

Showing the superhero in a series of fierce poses, the posters are accompanied by equally powerful bursts of text. In one, the words, "Power Grace Wisdom Wonder" are listed underneath a darkened, almost silhouette, portrait of Wonder Woman. The rest of the images capture the hero in the midst of action, with words like "Courage" and "Power" emblazoned beneath. Clearly, this is her movie and hers alone. And wow, guys, it feels like it's taken a while to get here, but it's happening. A female lead character is finally being thrust to the forefront of her own movie, and it feels fantastic to witness.

The decision to market the movie in such a manner isn't too surprising when you consider how Wonder Woman was prominently marketed in a positive and singular manner during the lead-up to Batman v Superman. Despite the fact that her name wasn't in the movie's title, she was still presented as an essential part, and by doing so, her power was portrayed on equal par to that of both Superman and Batman.

The way Gal Gadot's Wonder Woman is being marketed, however, is still somewhat surprising when compared to how women are portrayed in marketing for the MCU. Black Widow, who is undoubtedly a main Avenger and has been featured in five Marvel movies, has been either extremely sexualized in posters (such as the Captain America: Winter Soldier one), or, as I see it, simply pushed to the background (such as the main poster for The Avengers: Age Of Ultron where her presence is comparatively minuscule).

Part of that may be because a Black Widow solo movie still hasn't happened, and her character just doesn't carry the same clout as Captain America or Iron Man. But it still feels less than positive as a female fan to see the one female superhero of these movies underutilized within the films, and then underrepresented in their marketing. Including the fact that Black Widow was worryingly missing from merchandise, too. Perhaps even worse, prior to Black Widow, many female characters featured within superhero movies were often reduced to little more than swooning props for their heroic boyfriends in ads. It gets tiresome.

That's why these Wonder Woman posters are just as powerful as the Amazonian hero herself. The marketing hasn't awkwardly placed Chris Pine in there to provide the hero with a handsome, male prop to support the value of her movie, as pointed out by a user on Twitter. Nor has it diminished her story by cluttering the focus with supporting characters or villains. By keeping the focus on Wonder Woman, the posters appear to appreciate just how monumentally rare it is for female superheroes to be given their own stories and to lead blockbusters.

These posters also send a crucial message to the world that female stories aren't insignificant and that they can capably carry an entire movie. Most of all, they prove that whether she's a superhero or not, women are powerful, wonderful, full of courage, and deserve to be seen more on screen.