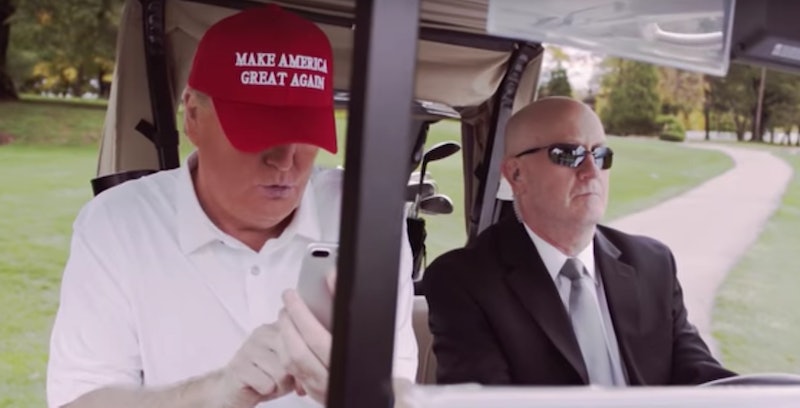 Fox News is refusing to air a commercial featuring a Donald Trump impersonator that opposes the GOP's tax bill. The 30-second clip is paid for by a Democratic group and warns against Trump's tax plan and its "lucrative breaks for golf course owners and cuts for rich heirs."

In the ad, a Trump look-alike tweets from the passenger seat of a golf cart. “A president who tells it like it is. That’s what America needs," the voice-over says. "But when it’s time for Trump to explain why his tax plan gives a big cut to the wealthy, including lucrative breaks for golf course owners and cuts for rich heirs — all worth more than a billion dollars for Trump and his family — why is this president suddenly at a loss for words?”

The Not One Penny campaign, a group of progressive organizations that oppose the GOP tax bill, launched the ad as part of a six-figure buy, Politico reported. Originally, the spot was appearing on Fox News, which is Trump's favorite channel, and Fox & Friends, his favorite show, so it wouldn't be unlikely for the president to have already seen it.

Fox News claims they pulled the ad because they have "a policy against taking ads featuring political impersonators," a network official said in a statement. They added that the network also previously turned down an ad featuring a Hillary Clinton impersonator.

But, as Politico points out, Fox News previously pulled another liberal-leaning ad, which called to impeach Trump, due to a "strong negative reaction" from viewers. The activist billionaire behind the ad, Tom Steyer, called the move "a profound failure of journalistic integrity, a suppression of constitutionally protected speech, and likely a consequence of inexcusable political pressure."

An aide from the Not One Penny campaign told Politico that while this latest ad might not run nationally, it'll appear on local Fox affiliates in Washington and New York. This move by Fox has made people further question the network's close ties to the president. Before he ran for office, Trump was a regular commentator on Fox, according to Newsweek, and now it's pretty much the only network he'll sit down with for an interview. When Fox pulled the ad about impeaching the president, it was shortly after Trump tweeted about it.

While most Fox viewers won't get to see this latest ad, Not One Penny is committed to making sure people understand that the GOP's bill, which passed the Senate Budget Committee on Tuesday, offers hefty tax cuts for corporations and the wealthiest Americans and would have a huge impact on the middle class and millennial women in particular.

It will negatively affect people still paying off their student loans, teachers trying to buy classroom supplies, and basically anyone who makes less than $100,000 a year — the average individual income in the United States is around $50,000.

This tax bill will also have devastating effects on the Puerto Rican economy. All goods coming from the territory to the continental United States would receive an additional 20-percent import tax. "It will obliterate [the Puerto Rican economy]," mayor of San Juan, Carmen Yulín Cruz, told Rachel Maddow. "This would be a much more devastating blow to our economy than [Hurricanes] Irma and Maria put together."

So while Trump has been promoting the bill as a plan that will help the average American — "Our focus is on helping folks who work in the mail rooms and the machine shops of America, the plumbers, the carpenters, the cops, the teachers, the truck drivers," Trump said in Missouri on Wednesday — there's a better chance that the top 1 percent will benefit from this bill more.

“No matter how desperately President Trump denies the reality — and his friends try to cover up the truth," Tim Hogan, a spokesman for the Not One Penny campaign, said in a statement after Fox pulled the group's ad, "they can’t escape the fact that this tax plan is a $1 billion tax break for the Trump family at the expense of the middle class."