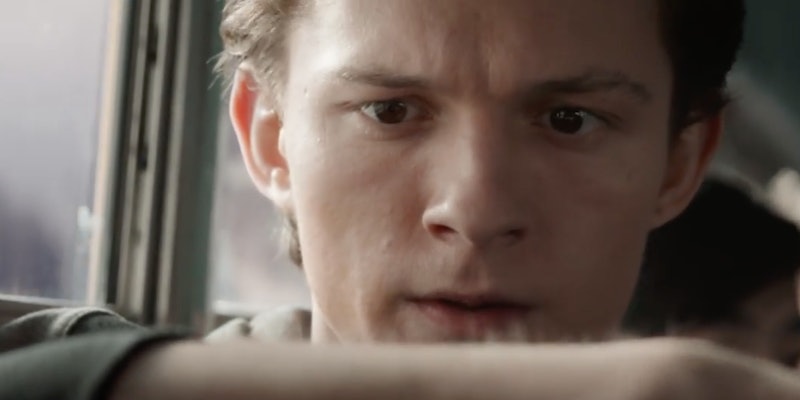 Good morning, everyone, from the glass case of emotions that I am currently encased in. The long anticipated Avengers: Infinity War trailer finally debuted this morning on Good Morning America, sending Marvel fans into countless existential spirals, from pre-mourning their faves to screaming over Thanos to WTF-ing over Vision not being cherry red anymore. The one thing, though, that none of us were emotionally prepared for? The emerging theories that beloved prince of snark and sweet summer child Peter Parker, aka Spider-Man, is going to die in Avengers: Infinity War, despite a fandom that wants to protect him at all costs.

At first this theory may sound downright absurd — for starters, Tom Holland will star in the Spider-Man: Homecoming sequel set for release in 2019, which will take place after Avengers: Infinity War and the as-of-yet untitled Avengers 4. It would be pretty hard to have another Spider-Man movie if Spider-Man was, uh, dead (and it's a wee bit too soon to expect Miles Morales, his successor in the comics, to take up the webs). The key to this fan theory isn't that Peter Parker will die permanently; it's that he'll die, and something — namely, the Time Stone of the Infinity Stones Thanos is trying to collect — will bring him back to life.

The theory is especially prevalent on Tumblr, where users have noted two especially chilling moments in the Avengers: Infinity War trailer. In the first, we see Thanos knock Spider-Man into the ground with a hand around his neck. In the second, we see Tony Stark out of his Iron Man suit, holding a limp hand that at first glance looks like his own — but, as a few eagle-eyed (and deeply concerned) fans have pointed out, could very well belong to one Peter Parker.

Another reason why this might not be too far-fetched of a theory: obviously, these are the last films for some members of the MCU. Many of the OG Avengers' contracts are running out, leading many to believe that they will be killed off in one of these two upcoming ensemble films. It would be a bit anticlimactic for any of these beloved heroes to die in the first round of fighting against Thanos, which has led a lot of fans to believe that the original Avengers will be relatively safe in the first part of Infinity War — which means Marvel needs other ways to raise the stakes.

Namely, they need to be able to have that emotional poignance of loss without it actually being permanent. And what easier way to pull at fans' heartstrings and raise aforementioned stakes than to compromise our favorite churro-loving, emoji-texting smol bean from Queens?

So how exactly would Marvel recover from killing off a literal child when the Peter Parker Protection Squad is, perhaps, more terrifying than Thanos? Assuming that the Infinity Stones are, in fact, fully collected toward the end of the film (gulp), fans are theorizing that Tony Stark himself would pick up the Infinity Stone gauntlet and use the Time stone to reverse what happened, and save Peter (or anyone else who may have prematurely died in the first film). Tony Stark has wielded the gauntlet in the comics before, and, seeing as we will likely be saying goodbye to this character, it would be a fitting exit to have him wield the scary space version of his own Iron Man gauntlets at least once before the MCU kills him off. (I'm typing this very cavalierly, but trust, I am Not OK.)

In any case, there's probably no reason to panic, because of the announced Spider-Man sequel (and the third movie that Tom Holland went ahead and announced in a press interview, much to Marvel's chagrin). Just make sure you go into the theater emotionally prepared for anything to happen to any one of your faves, because with the Infinity Gauntlet around and Thanos tearing up our big blue planet, none of the normal rules in the MCU apply.