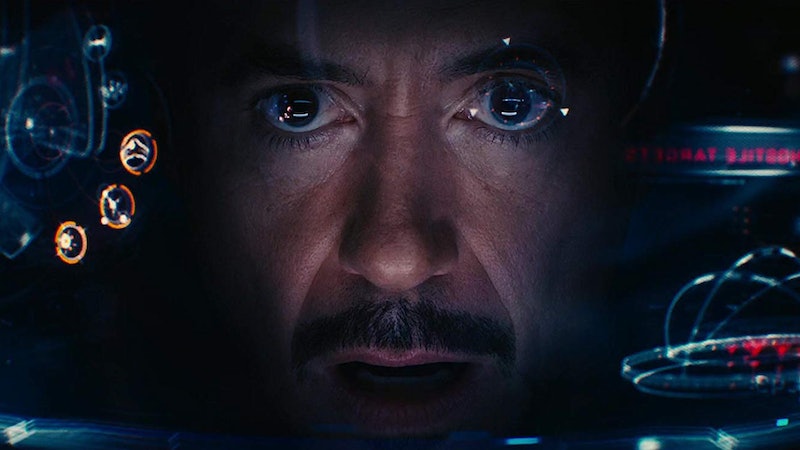 It's been three months since Avengers: Endgame arrived in theaters, but the wounds of losing the important members of the team have not fully healed. And just when fans have finally stopped crying, their hearts will be broken once more, thanks to a recently-released Endgame deleted scene that gives Tony Stark a heroic sendoff.

On Friday, July 26, USA Today exclusively premiered the deleted scene on their website and Twitter account, which takes place immediately after Tony (Robert Downey Jr.)'s death while defeating Thanos (Josh Brolin). In the sequence, as Pepper (Gwyneth Paltrow) tearfully says goodbye to her husband, the rest of the Avengers slowly and mournfully take a knee, in order to honor Tony's heroic actions. The gesture is led by Hawkeye (Jeremy Renner), and is a touching way to underline the fact that Tony is not only a hero for saving the planet from Thanos, but also is the original hero of the Marvel Cinematic Universe.

It's because of Tony and the success of the Iron Man franchise that Marvel was able to build the universe of films that fans have grown to love and obsess over throughout the years — it's a full circle moment that honors the character both in the film and in terms of the larger, Marvel universe. The symbolism of the moment doesn't appear to be lost on fans, many of whom shared their overwhelming emotions on Twitter:

In addition to appreciating that Tony got the heroic tribute he deserved, many fans pointed out the poignant moment where Dr. Strange (Benedict Cumberbatch) holds back tears as he takes a knee in honor of his friend. "I like this scene because it looks like Strange is taking it the hardest even though he knew it would happen," Twitter user @CTCTheBest_2 wrote, to which user @clemerek responded, "I think that's why he took it so hard, he knew it was coming and couldn't do anything about it."

In Infinity War, Dr. Strange — who, as a Master of the Mystic Arts, can see into an infinite number of timelines and dimensions — tells Tony that he has seen 4 billion different outcomes for their fight against Thanos, and that the Avengers only triumph in one. Later, in Endgame, Tony looks to Strange before he decides to take the Infinity Gauntlet from Thanos and sacrifice himself in order to protect the planet, and Strange confirms that this is, indeed, the one timeline in which the Avengers succeed.

Because of his ability to see the outcomes of every single fight, Strange clearly knew that Tony would have to die in order for the Avengers to win — and, based on his own decision, it seems that Tony knew that he had to sacrifice himself in order to save his planet. While Strange is clearly upset at Tony's funeral — which did make the final cut of the film — his reaction in the wake of Tony's death is much more devastating, because he knew that there was nothing to do to protect his friend from this fate.

While most fans were devastated by the Avengers' heroic tribute to their fallen friend, some couldn't help but notice that there was one member of the team who wasn't affected by Tony's tragic death: Gamora. The assassin is murdered by Thanos in Infinity War, and so the Gamora who appears in Endgame is from 2014, and that version of herself hasn't met the Avengers or even become a part of the Guardians of the Galaxy. Thus, it's not surprising that she's not as affected by Tony's death as the other Avengers — after all, this Gamora didn't really know him.

While Avengers: Endgame gave Tony Stark a very moving and impactful funeral — and allowed Peter (Tom Holland) to explore the ramifications of his death in Spider-Man: Far From Home — this deleted scene adds another level of impact to Tony's tragic death, and gives him hero's sendoff that he deserves.

After all, he was the first hero of the Marvel Cinematic Universe, the leader of the Avengers and a mentor to all of the misfit heroes who joined the team. It seems only fitting that all of the heroes he brought together take a moment to honor him and the world-saving sacrifice he made.