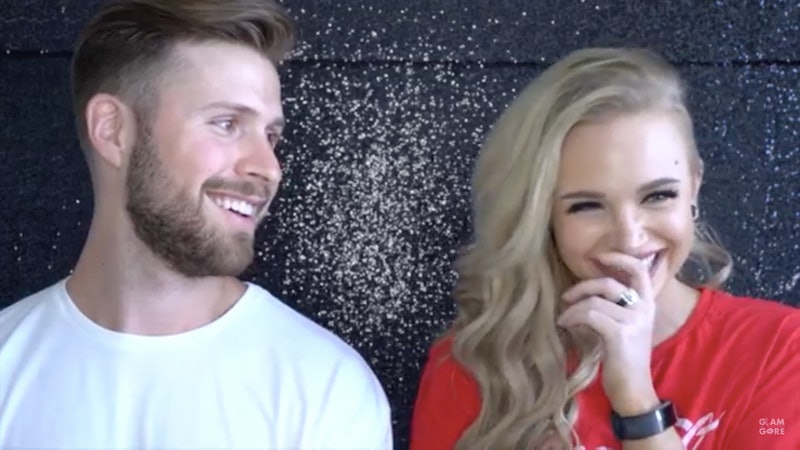 Tinder is a weird place. Between the unsolicited and NSFW messages to the whole of idea of swiping to connect, it's an odd but still useful platform. Now, one YouTuber is using it for makeovers — kind of — because this beauty vlogger let her Tinder match do her makeup. While that may sound of odd, it's actually a pretty cute story, and you'll definitely be shipping it before you get to the end of the video.

If you haven't heard of the YouTube channel Glam & Gore, well, you're kind of missing out. The channel was created by makeup artist Mykie who specializes in, well everything. Her channel is exactly what you'd think: a mix of gorgeous glam and some hardcore SFX gore. She's basically a YouTube unicorn, and now she's got a friend named Henry — who just happens to be her Tinder match.

Prior to the video in which Henry does her makeup, Mykie had already done videos where Tinder chose her special effects makeup and her glam. It was actually in the first Tinder video that she swiped right on Henry, and as it turns out, he's a fellow YouTuber's and friend of Mykie's brother. Small world, right? Now, here she is, having him do her makeup. Strange world indeed.

Henry didn't just put makeup on Mykie. Oh no. They went full on and had him remove her makeup for her. The result? A multitude of jokes about needing more makeup wipes. And honestly, it was so cute.

Once it became time to apply makeup, Mykie did lead him through her steps in order, but other than that, Henry was on his own. From attempting to apply her Tarte foundation (which he adorably pronounced Tart-tay) with a round fluffy brush and seemingly being terrified of putting eyelashes on her to applying her mascara in a way that honestly looks kind of terrifying, Henry was a true champ during this video.

What a date, right?

While Mykie's Tinder match makeup video is ultra unique and basically results in all of her subscribers having a new favorite couple — even if neither say if they've actually decided to go on a date — beauty guru's videos have been taking on new territory as of late.

Challenges have basically started taking over the YouTube beauty space. From gurus like Alissa Ashley using a mystery wheel to do their makeup to beauty vloggers like Laura Lee buying discount makeup from places like Marshall's and Wal-Mart, it's no longer all tutorials and Sephora hauls on the platform.

Clearly, YouTube is evolving, and there's no telling what comes next, but honestly, that's kind of a secondary question. What do viewers really want to know? If Mykie and Henry ever went on an actual date.

Let's be honest, while everyone already ships them thanks to this video, a nice dinner wouldn't hurt anything. Here's hoping for a "Boyfriend Does My Makeup Video" from this YouTuber and her Tinder match.