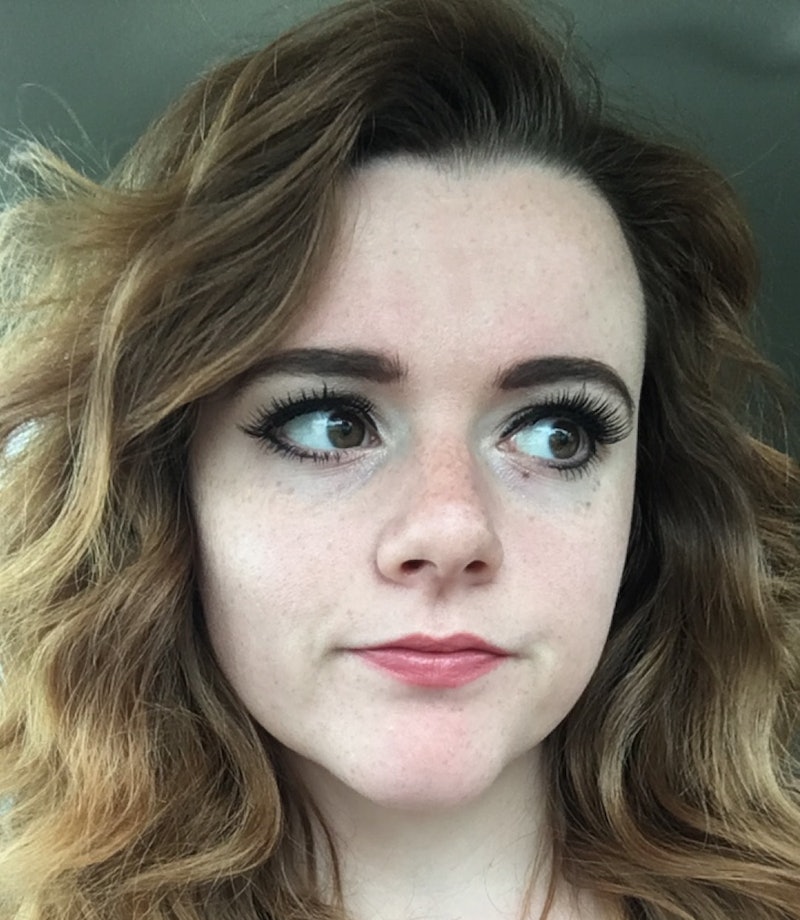 Tumblr user laurlaurrdraws, aka Lauren, was not expecting her Tumblr post to go viral. But when she posted her save-your-makeup shower hack on May 11, it attracted 5,000 notes overnight, and now is sitting at more than 108,000 notes, which means users have liked and/or reblogged the post 108,000 times.

Not only did the post go big on Tumblr, it went viral on the rest of the internet, and Lauren, who asked to be referred to by first name only, has been featured on sites like BuzzFeed and PopSugar.

"It's beyond bizzare," she tells Bustle in an email.

Her hack is simple, yet amazing: She used swim goggles to protect her eye makeup in the shower. Lauren told BuzzFeed she has a perm, so when she wanted to freshen up before going out with her friends, dry shampoo was a no-go. And she was wearing Allure fake lashes, so "I'd be dead before I wasted another pair of lashes and 45 minutes blending eyeshadow," she said.

Now that the internet at large has discovered Lauren's genius, she says she's getting tons of comments from people she knows about her newfound fame.

"I'm seeing people who I had college classes commenting 'I know this girl!!! She would end up on BuzzFeed!'" she explains. "And I'm having coworkers and family members share the article and tagging me every time they see it. Followers sending me screenshots of it on iFunny and stuff too. It's absolutely wild."

Lauren told BuzzFeed that, as per internet standard, not all the hype has been positive. Aside from the comments telling her to use dry shampoo, there were notes from people telling her she just should've behaved like a normal, goggle-less human and stuck her head in the sink.

Her response is a thing of beauty. "Listen, if you think I'm gonna squeeze my fat ass head between a faucet and a drain and deny myself of a wonderful, full-body experience, you're dead wrong," she said.

It's hard to believe no one thought of this before, but that's the beauty of viral makeup hacks: They fill a void in our lives we somehow always knew was there, yet never knew we could fix.

While we reap the benefits of Lauren's innovation, she has plans to continue college, studying to become a game developer and artist. Though, now that she's achieved some notoriety, "I just want to be on Ellen honestly," she says. "Thinking about adding makeup hack to my resume."