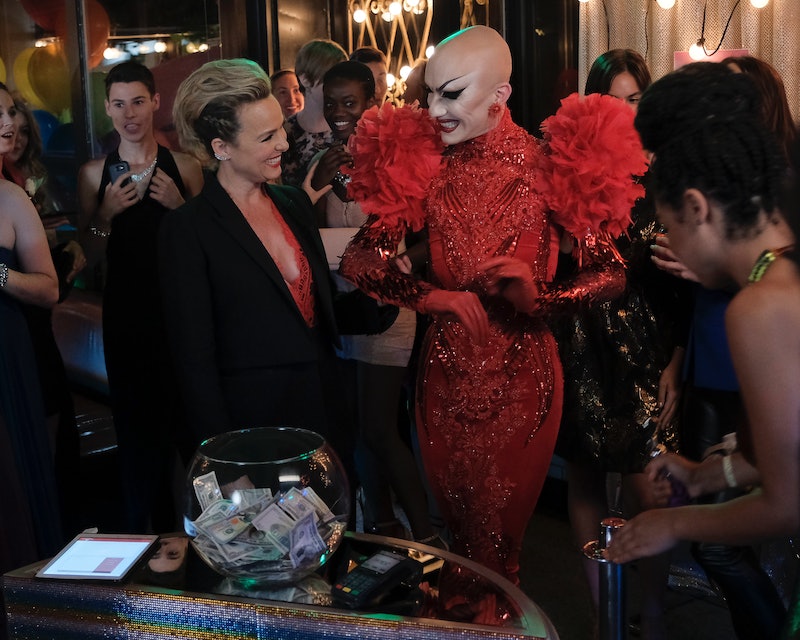 Spoilers ahead for The Bold Type Season 3, Episode 2. Jane may have unfairly judged Patrick when she first met him, but just two episodes into The Bold Type Season 3, he might already be wearing out his welcome. As Scarlet's new digital editor, Patrick sees Jacqueline and the print mag as antiquated and out of touch, and himself as a herald for a fresher, edgier online presence. But in the April 16 episode, Jacqueline proves Patrick very, very wrong, and checks his bias in the process. Never underestimate a woman in the workplace — and especially if that woman is Jacqueline Carlyle.

Jacqueline isn't afraid to step on any toes, but she's been slightly displaced by Patrick, who has been brought in to revamp Scarlet's digital side. He's all about social engagement and community and whatever other media-centric buzzwords you can throw out. He's woke. He's with it. He has long hair that he tosses back and forth so you know he's cool. When Kat's local lesbian bar is about to shut down, she decides to throw an LGBTQ prom to raise the money it owes in back taxes and fines, and Patrick is all about it. Maybe he can even get Sasha Velour from RuPaul's Drag Race to show up! But when Jacqueline says she can help with the event, Patrick flat-out dismisses her.

As it turns out, though, Jacqueline knows Sasha personally, and Patrick is astonished to see them show up arm in arm after he himself is unable to get her there. He condescendingly assumed Jacqueline didn't even know what Drag Race was, but not only did she discover Sasha before she got famous, here she is showing him up at his own game. "I feel stupid saying that I underestimated you because you're Jacqueline Caryle, but I did," he tells her sheepishly. Jacqueline, of course, takes the high road, saying simply that it "puts [him] in good company."

Patrick is an ally in many ways — he did get himself fired for standing up for equal pay — but this episode shows there are still some implicit biases, like ageism, he has yet to shake. As Jacqueline says, he's not alone: women being underestimated in the workplace is a persistent real-world issue. According to a study conducted by Paychex, 67% of women in tech reported feeling underestimated or not taken seriously by their co-workers. And that's just one example.

Age further complicates this: though research is mixed about how age bias affects men and women differently, "younger employees perceive older women as less of a threat to their own careers," per CNN. That's been presented as a positive, but in The Bold Type, that's exactly the problem. Patrick doesn't see Jacqueline as a "threat" because, at least in this instance, he doesn't think of her as being on an equal playing field, and so he dismisses her — despite the fact that she has more experience and is demonstrably pretty killer at her job.

What Patrick should be doing is working in tandem with Jacqueline to blend the digital and print verticals into one powerhouse brand, rather than trying to one-up "his game," as he says after discovering he and Jacqueline are both trying to secure an interview with Cardi B. Hopefully now, he's learned his lesson.