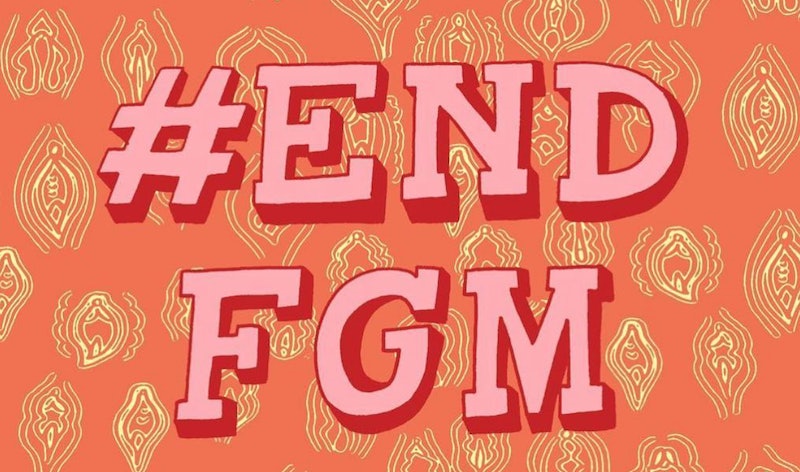 Many people believe that female genital mutilation (FGM) is a procedure that only happens on the other side of the world, but it's also an issue right here in the UK. Feminist collective The Pink Protest and activist Nimco Ali have launched a joint campaign to protect girls in the UK from FGM, and all they need from you are a few simple things.

For those who are unaware, the NHS describes FGM as "a procedure where the female genitals are deliberately cut, injured or changed, but where there's no medical reason for this to be done." People who perform FGM — which is also known as "female circumcision" or "cutting" — often cite religious, social cultural reasons for doing so, according to the NSPCC, but the procedure can cause huge physical and emotional pain to girls and women.

The World Health Organisation estimates that more than 200 million girls and women alive today are survivors of FGM. The NSPCC states that 137,000 girls and women in England and Wales alone have been affected by the procedure. Complications associated with FGM range from "constant pain" to "repeated infections," the NHS states, and, in some cases, even death. Long-term side effects can include urinary problems, along with "cysts and abscesses," and a greater risk of childbirth complications, according to the NHS. And there are psychological side effects too: depression, anxiety, and nightmares and all mentioned on the NHS website.

Since June 2013, 2,100 people contacted the NSPCC regarding FGM and more than a fifth of these cases were referred to the police or child services. But here's where legality becomes an issue. FGM has been a crime in the UK since 1985 and, in 2003, an act was passed that made it illegal for any UK national or permanent UK resident to take their child abroad for FGM. However, there is still no legal protection for a child who is at risk of undergoing FGM.

That's exactly what Ali and The Pink Protest are trying to change. In November 2018, Baron Michael Berkeley introduced a bill to the House of Lords that would amend an existing part of the Children Act. This amendment would "considerably extend protection to young girls at greatest risk of genital mutilation," Berkeley told the House of Lords in July 2018, by making it easier for third parties to intervene.

The House of Lords passed the bill, and the House of Commons looked at it the very next day. However, one Conservative MP was all it took to halt the bill, reports iNews. Christopher Chope — the man who also blocked Gina Martin's upskirting bill — objected, causing a vote to be scheduled for Jan. 25. Due to Brexit, this vote was delayed to Friday, Feb. 1, Refinery29 reports.

FGM campaigners are asking you to sign a petition before Friday, to write to your local MP urging them to allow for the passing of the amendment, and to share a video on social media to spread the message even further.

If you're wondering whether an online petition can really sway the minds of politicians, co-founder of The Pink Protest, Scarlett Curtis, has the answer: "[Baron Berkeley] told us that petitions really do make MPs realise just how much the public are pushing for an issue and can genuinely help to sway political opinion in one way or another," she told Refinery29.

Ali, who is a survivor of the procedure, also told the publication: "FGM is a social norm and if you've had it, you're more likely to think it's okay. This doesn't mean all women who've had FGM will cut their daughters, as we've broken the cycle in my family, but girls born to women who have had FGM are more at risk."

Ali went on the speak about her own experience of FGM, saying:

"When I was seven and I was subjected to FGM, I had no idea if people cared, but today I know and, in signing this petition, you will be standing with me and others and telling the world you care."

One signature and a show of support is all it takes to potentially help countless lives and eradicate FGM for good. When you think about it, that's really not a lot to ask.