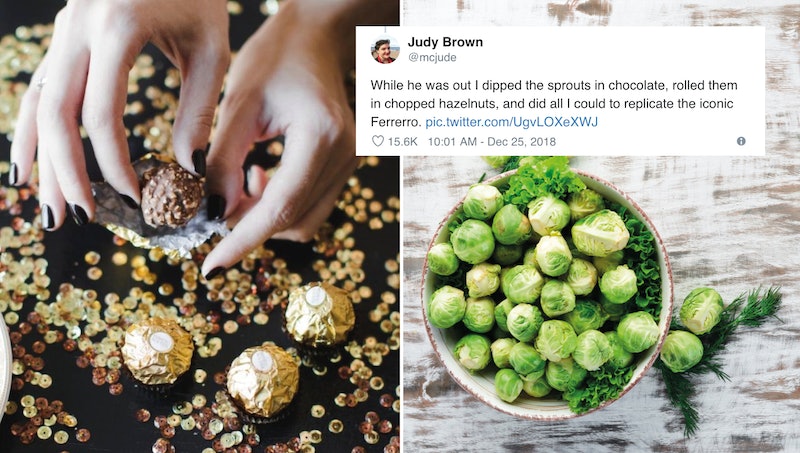 Ah yes, Christmas. A time for love, family, friends, cheer, and of course, trolling. Who got a lump of coal this year? Or maybe you got a funny hat that you had to wear for the whole day? Who knows but y'all, one ingenious woman totally killed it with the best Christmas prank this year. And I mean, sleigh-ed. Yes, had to get one Christmas pun in there. Ok so get this — Twitter user Judy Brown fooled her father into thinking sprouts were Ferrero Rocher.

Say what? Yes, in perhaps one of the most genius, if slightly time consuming, pranks of the season, Brown did the absolutely unthinkable. So full disclosure, this is not the first time she has done this prank on her poor dad. I know right? Lightning does occasionally strike twice. So the fact that she has not only thought this up before but also has basically been waiting to pounce again, is beyond belief.

Yes, Scottish mezzo Brown has taken advantage of her father's true obsession with sweet goods to get to a whole new level, by actually tricking him into eating raw Brussels sprouts. What?! Yes they are shaped the same but erm, the latter are very much green and sprout-ish.

OK so like I said before, this is absolutely not Brown's first sprouty rodeo. Oh hell no. So back in 2016, she shared her cunning trick and how she did it. Back then, her technique appears to be a little simpler. She unwrapped the original chocolates, and rewrapped the sprouts in the packaging. So when her unsuspecting patriarch went to grab one, he had a face full of actual sprout, much to everyone's amusement. So with only two years having passed since the OG trick, she needed to engage extreme levels of cunning, evil, and out and out villainy. And boy oh boy did she ever.

So basically she went to the supermarket and bought a box of the delicious chocolate hazelnut balls. Not happy with simply giving her sweet dad some chocolate, whilst there she also picked up some chocolate, hazelnuts, and sprouts. This is when the out and out Bond villain level of cunning kicked in.

She carefully unwrapped the Foerero Rocher, ensuring to keep the wrappers and put the chocolate balls of goodness to one side for later use. To eat them. Yum yum. Anyhow, after that she daintily dipped the sprouts into chocolate, rolling them in hazelnuts and allowing them to chill so as to go solid and look exactly like the real deal. Then after that, wrapping them ornately, she took extra care to make sure the box was sealed properly, and then (this is the key added element) put it in a bag of gifts from her auntie.

And then, the waiting game.

And then, chow time. He ate one, the prank landed and it is a Christmas miracle no fights kicked off.

Since the prank went viral, Brown has found herself at the centre of a mini media storm. "Dad is baffled and I’m chuffed," she told the Mirror Merry prank-mas everyone.