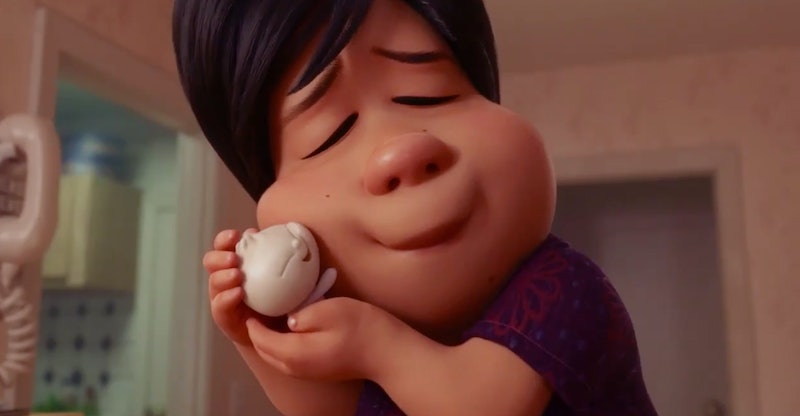 When moviegoers head to see the action-packed film Incredibles 2 when it hits theaters on June 15, they might also want to bring tissues. On Thursday, Pixar released the first clip of their new short film Bao, which they will screen before each showing of the long-awaited sequel to the hit 2004 superhero flick. And it already looks so bittersweet.

Bao marks the first animated Pixar short directed by a woman. Made by Chinese-Canadian director Domee Shi, who also worked on Inside Out, the film tells the story of a Chinese mother living in Canada whose children have left home, and she is thrilled to get another chance at parenthood when her homemade dumpling comes to life.

In a statement on their website, Pixar said that the short "explores the ups and downs of the parent-child relationship through the colorful, rich, and tasty lens of the Chinese immigrant community in Canada." However, the dumpling begins to get older, and the mother must come to terms with the fact that children grow up.

In the 30-second video, the baby dumpling cries inside a bamboo box, growing arms, legs, and then a full body. As he slowly wakes up, the mother peers over the top in dismay, crawling on the table and knocking a bowl to the floor. She picks the baby up, cradling him in her hands while he adorably giggles.

According to BBC News, Shi desribes the story as magical, modern-day fairy tale, kind of like a Chinese Gingerbread Man story. She even asked her mom, who is a Chinese-Canadian immigrant, to consult on the film in order to ensure the authenticity of the cooking scenes.

In the 14 years since its predecessor, the hype for Incredibles 2 has been building and building. The second film will center on Helen Parr, better known as Elastigirl, voiced by Holly Hunter, as she sets out to improve the public image of superheroes. Meanwhile, Bob Parr — aka Mr. Incredible — played by Craig T. Nelson, stays at home to care for young Jack-Jack. Sarah Vowell plays their oldest daughter, Violet, and newcomer Huck Milner will lend his voice to their son, Dash.

As soon as the teaser from Shi's short film was released, Twitter users voiced their excitement for Bao, as well.

However, Pixar's last short, a 21-minute film called Olaf's Frozen Adventure, which features characters from Disney's 2013 hit movie Frozen, did not sit well with viewers. The short preceded Pixar's Oscar-winning full-length, Coco, which was inspired by Mexico's Day of the Dead.

The pairing was criticized by critics and audience members alike. Brittany Levine Beckman of Mashable called the coupling of the two films "culturally tone-deaf," and Twitter users echoed the sentiment. It was also denounced for its less-than-entertaining content and its unusual length. Disney pulled the short from theaters in December 2017, the month after it premiered — although one representative told EW that it "was always promoted as a limited run."

Like Coco, though, Bao, which will run eight minutes long, is a step in a more diverse and inclusive direction, earning Pixar praise from people online.

Shi, who grew in China and moved to Toronto at age 2, joined Pixar in 2011, according to The Disney Blog, and worked on both Incredibles 2 and another long-awaited sequel, Toy Story 4. The company's short-films are often as buzzworthy as their feature films, and they most recently took home an Academy Award for the 2016 short, Piper, which accompanied Finding Dory in theaters.

If this clip is any indication, all eyes are sure to be on Bao come June.