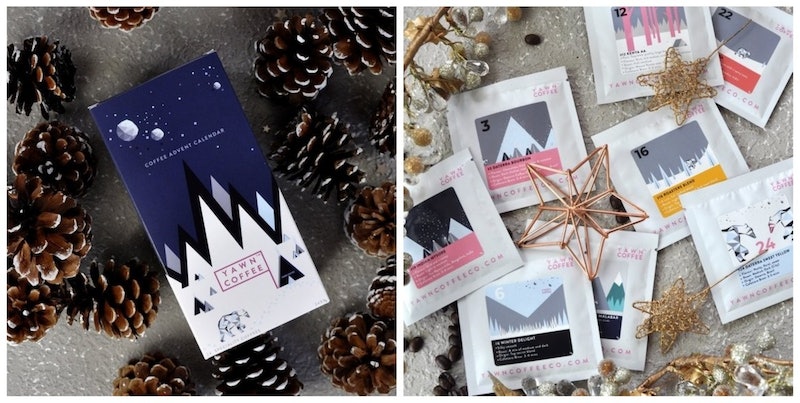 Because we’re knee deep in “BUY ALL THE HOLIDAY THINGS BEFORE THE HOLIDAYS ACTUALLY ARRIVE” season, let’s take a look at yet another advent calendar that’s hit the scene this year: The Yawn Coffee Advent Calendar from Yawn Coffee Co is literally full of coffee. I’m only sort of kidding when I say that this beautiful box is everything I have ever wanted out of life. Good coffee ranks highly on my own personal list of favorite things — and when you add some seasonally-appropriate surprises to the deal? Sold.

Yawn Coffee Co is part of Tea Revv, a UK-based tea company which launched in 2017. The brainchild of Joe Howard, Tea Revv itself was the natural evolution of Howard’s first business venture, a gift shop he opened in Derbyshire when he was fresh out of school in 2011. In 2014, Howard expanded his shop, at which point he took the opportunity to begin learning about all things tea — from the types and blends to the history and culture. After selling the shop in 2016, he decided to launch his own tea brand — one that “promoted a superior quality tea, with tasty and exciting unusual blends not usually found in the common tea bag,” according Tea Revv's About page. The result was, of course, Tea Revv (which stands for “tea revolution,” by the way); these days, you can find such unique blends as Ice Cream Earl Grey and Dark Ruby Roasted Oolong among its wares.

Yawn, meanwhile, was founded by Howard and several of his coffee-enthusiast friends — because, they say, they were “tired of boring coffee.” The idea behind the venture was to bring exciting roasts and blends to home kitchens — to make “amazing tasting coffee” easily brewed at home “without expensive equipment” or an entire café setup. With beans responsibly sourced from a variety of locations ranging from India to Costa Rica, they partner with a local roaster near their home base in Sheffield with 30 years of experience to bring their coffee to life.

In the fall of 2018, Tea Revv and Yawn each launched a Kickstarter campaign: One for a tea advent calendar, and one for a coffee one. Both achieved overwhelming success, raising many times more than the campaigns’ initial goals — but it was the Yawn Coffee Co calendar that garnered the most interest: With an original goal of £4,000, the project was 90 percent funded in just three days. When the campaign closed at the end of October, a total of £22,425 had been raised to make the coffee advent calendar a reality. (The tea calendar, meanwhile, raised £14,460. Although it’s not quite as impressive as the amount brought in by the coffee calendar, that's still nothing to sneeze at.)

Available in two versions — ground and whole bean — Yawn’s Coffee Advent Calendar contains 24 sachets of specialty coffee. The ground version’s sachets each hold nine grams of "Omni Grind" coffee, or just enough for one perfect cup. The grind is best for brewing methods like French press and Chemex, but as Yawn notes on the Kickstarter page for the calendar, the coffee “can be brewed how you see fit.” (So, basically, you do you, whether that’s pour-over or drip.) The coffees themselves include such delightful-sounding blends and roasts as Winter Delight, Kenya Blue, Bourbon Daterra, and Night Coffee, as well as a number of picks marked only “Surprise.” Because, I mean… what’s an advent calendar without a few surprises?

Also, the packaging. My goodness, that’s a beautiful-looking gift set. It’s so beautiful I might just, uh, gift it to myself.

Both the ground and whole bean calendar cost just under $30; however, you’ll probably want to account for shipping costs if you place an order: While Yawn and Tea Revv do ship internationally, you can expect to pay some hefty costs to do so. (Such is the nature of purchasing globally.) The good news is that the Etsy page for the calendar has a neat little tool that can estimate shipping for you based on your zip code; for me, for example, shipping would cost $10 and some change. That should be able to help you figure out if the whole thing is worth it for you. (It certainly is for me; I would definitely be willing to pay $38 for a gorgeous advent calendar with almost a month’s worth of daily cups of specialty coffee in it.)

You can buy Yawn’s coffee advent calendar and Tea Revv’s tea advent calendar on both Etsy and the Tea Revv website. May your mornings during the month of December be full of delicious, warm, comforting, and cozy drinks.