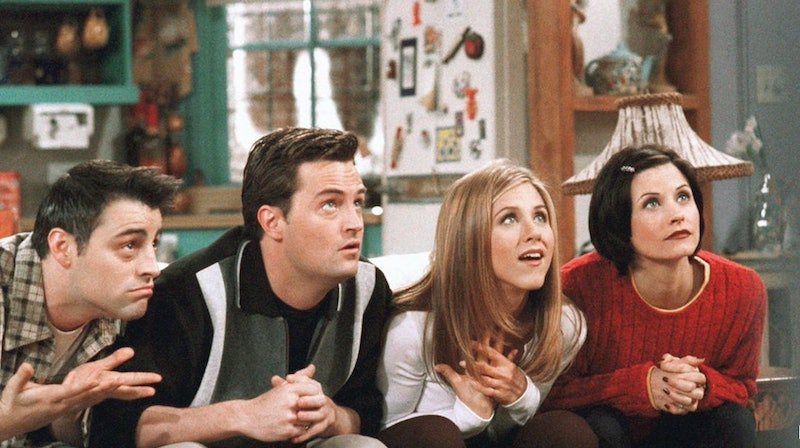 Imagine if all the hours you spent marathoning your favorite TV series actually paid off in ways other than your ability to quote Ross and Rachel’s break-up scene by memory. Well, it just might because starting now, you can enter to win $1,000 for watching 25 hours of Friends. Yes, you read that correction. A thousand American dollars to watch television. Dreams do come true.

In honor of the 25th anniversary of Friends, FrontierBundles.com wants to pay one “super fan” $1,000 to watch 25 hours of the sitcom, roughly a third of the entire series. That works out to $40/hour to watch Friends or about $16.67 per episode you watch. (They estimate 25 hours will get you through about 60 episodes of Friends.) In addition to the thousand dollars, the one winner will also receive a “Friends Fandom fun pack” which they say includes “Friends t-shirt, Central Perk mug, popcorn, treats, and a 12-month Netflix subscription.” If you already have a Netflix account, they’ll send you a Visa gift card valued at the cost of a year-long subscription. (That’s an additional $107.88 if you’re going with the most basic $8.99/month plan.)

“We’re in search of ones who know the quotes (“PIVOT!!”), the hilarious scenarios (the beef in the trifle; the Holiday Armadillo), and all the little details (exactly how many sisters does Joey have? What is Chandler’s job?) that make the show the tried-and-true classic it is,” a press release for the contest states.

If that sounds like you, read on, my Friend.

Who exactly are they looking for? Someone who really, really likes Friends. Also, the rules state that the fan “must also be an organized, detail-oriented individual,” though it’s not exactly clear why. Having an active Twitter account and following aren’t required but the rules state that it will help as the winner must live-tweet their 25-hour viewing. “Once you have completed your marathon,” the rules state, “tweet a picture of yourself celebrating the day of September 22 with your own friends (be sure to tag @FrontierCorp in your post) and we will send you your hard-earned reward!” In other words, you’ll be paid $1,000 to watch Friends and live-tweet about it, tagging Frontier Corporation and giving them a little promo.

The application is pretty simple. You’ll need to enter some basic info (your name, contact info, where you work) as well as some Friends-specific details. You’ll need to select your favorite Friends characters. Yes, Gunther is an option. Yes, it also says “just kidding” next to that option. In lieu of a personal essay, you must answer “Who do you think was right about The Break — Rachel or Ross? Why?” written with a minimum of 100 words. I’m sure you have a dissertation’s worth of words on that already.

Let’s talk about the fine print. When you click “Submit” you’re agreeing to let Clearlink, a Frontier Authorized Sales Agent, contact you for marketing purposes. Pretty standard for contests of this type. Aside from that, the rules and stipulations are pretty straight forward: fill out the form and cross your fingers.

If this is the first you’re hearing of Frontier Communications, same. According to their website, they offer internet and TV subscription bundles. So, the connection to watching Friends a bit of a stretch but not a complete stretch. In FrontierBundle.com’s own words, “As providers of premium entertainment channels, we’re all about top-rated, iconic TV shows—and we can recognize 'em when see 'em. That's why we wanted to celebrate the 25th anniversary of one of the most loved shows on television, Friends, with its most loyal fanbase!” (Though, it is a little ironic that company selling TV packages is giving away Netflix subscriptions.)

While you’re waiting to see whether you are the lucky Friends fan who get $1,000 to watch TV, you can celebrate the show’s 25th anniversary in a number of different ways. LEGO is releasing a Lego Friends kit sometime in the near future, so you can watch Friends with your mini-Lego Friends. There’s a Pottery Barn Friends collection that will let you subtly (or not so subtly) make your entire home an homage to the sitcom. There’s even a New York City Friends pop-up event coming September 7 that will give fans an immersive nostalgic experience.

As far as how they'll be choosing a winner for the $1,000 prize, FrontierBundles.com said, "We'll be reviewing all of the applications and paying special attention to the essay question to determine who is the biggest Friends fan." So, better start brushing up on your Friends knowledge now.

More like this
“The Door Is Always Open” For Another 'Breaking Bad' Spin-Off, Says AMC Boss
By El Hunt
Side Character Energy Has Arrived — Here’s What That Means
By Sophie McEvoy
American Girl Doll Memes Are Going Viral On Instagram & Tiktok
By Emma Carey
astro speaking eleven
By Brittany Beringer
Get Even More From Bustle — Sign Up For The Newsletter