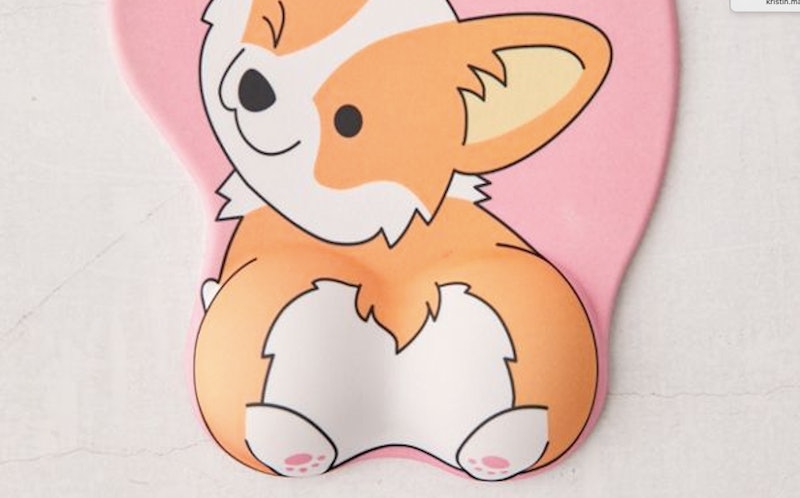 One of the great joys of working from home is the fact that you can freely stock your work space with absurd office supplies that might not be at home in a more formal environment. You want sparkly pens? Go for it. Sarcastic sticky notes? You do you. A corgi butt mouse pad? Add it to your shopping list — and also, yes, I am delighted to inform you that you can get a corgi butt mouse pad, thanks to the wonders of Urban Outfitters. What’s more, the butt is actually a wrist rest.

Be still, my pet-loving heart.

The internet loves corgi butts. Like, really, really loves corgi butts. This obsession is not a new phenomenon; heck, it’s not even new phenomenon in mainstream internet culture: Photo roundups of these puppers’ fluffy little behinds have been circulating for at least eight years, as evinced by this BuzzFeed piece dated Nov. 30, 2011. But in recent years, this adoration of corgis and their frequently tail-less butts has grown by leaps and bounds — so much so that the New York Post recently declared the breed “the hottest dog of 2019.” Indeed, as the Post points out, the Pembroke Welsh Corgi has jumped 11 spots in the American Kennel Club’s popularity ranking over the past 10 years: They ranked 24th in 2008, but 13th by 2018.

Given the sheer amount of media, both social and otherwise, devoted to these adorable pups, it’s relatively unsurprising that they’d eventually arrive on stationary and other office supplies — which is where this mouse pad enters the picture. Available at Urban Outfitters for about $17, it features a manga-style illustration of a corgi set against a pink background, looking over its shoulder and with its butt — which, as I mentioned, is also a wrist rest — on full display. It’s not totally clear what the wrist rest is made out of; these and other similar ergonomic devices can utilize everything from gel to memory foam for their support. Regardless, though, it’s hard to ignore the cuteness

There admittedly isn’t a ton of evidence supporting the idea of mouse pad wrist rests providing relief from carpal tunnel syndrome symptoms or other varieties of joint pain; however, wrist rests aren’t detrimental to your health or comfort, either. Indeed, researchers examining the issue have largely come to the conclusion that whether or not you use a wrist rest comes down to personal preference. For example, as a 2015 study published in the journal Applied Ergonomics found, no ergonomic devices tested, including a gel mouse pad, reduced carpal tunnel pressure; as such, they concluded their findings “[did] not endorse a strong recommendation for or against any of the ergonomic devices commonly recommended for patients with CTS” and noted that “selection of ergonomic devices remains dependent on personal preference.”

So, hey, if you like using a wrist rest with your mouse, and you adore corgis, this corgi butt mouse pad is built with you in mind exactly. Nab it over at Urban Outfitters. Happy computing!