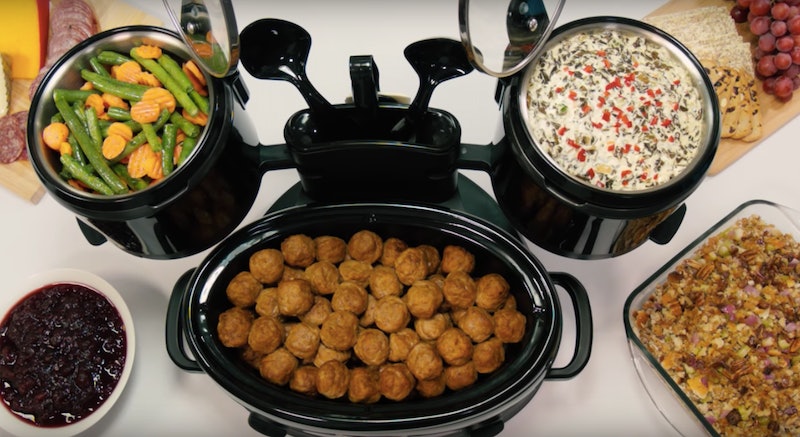 To the meal preppers of the world: I salute you. I know not how a human being finds the motivation to cook for a minimum two hours on a Sunday, let alone organize things neatly into labeled tupperware and store them, but that's why you're living your most Instagrammable life while I am bleeding each week's paycheck on frozen moist meals. It turns out, though, that this is truly your time in the sun, because there now exists a Crock-Pot that can cook three different dishes at once — giving you the kind of power that no human being ever dreamed of wielding in the meal prep world.

The Crock-Pot in question is actually called the Crock-Pot Entertaining Tower, or the Crock-Pot Swing and Serve Slow Cooker. According to the description on Target, "Now you can prepare three different appetizers at once for a spectacular party spread — or cook a complete meal for your family, including a main dish and two side items — all in one versatile appliance." While it's nice of its creators to assume I am kind enough to share my food with other human beings, the real takeaway here is that GUYS, we can officially make mac and cheese, mashed potatoes, and one of those kitschy Instagram Crock-Pot video desserts all at the same exact time. Every day just became my birthday and I didn't even have to drag my friends to a Red Robin to make it happen, y'all.

My rampant nerdery and slight fear of this contraption aside, it actually has a lot of cool tricks up its sleeve. It lives up to its "Swing and Swerve" name, as the two cookers on the right and left side can be pushed out or pushed in above the main cooker, depending on the kind of space you have. Each of the different pots can be set to its own unique temperature to cook the specific dish you put in it. There's even a little caddy in the back to store your spatula/the spoon you keep unabashedly dipping into your food and slurping from even though it's nowhere near ready enough to eat. INSIDER KITCHEN recently did a demo video showing off everything this slow cooker can do, and it's straight up mesmerizing.

Crock-Pot also shared a video of their own. Behold: Meatballs! Chip dip! Vegetables (not really sure if this merits an exclamation point, but I'll throw them a bone anyway)! It's almost enough to make a person forget all that bonkers fictional Crock-Pot drama from This Is Us a few months back. (Almost.)

Dreams on dreams, y'all.

In case you are looking for inspiration for something to cook that isn't just the same mac and cheese recipe over and over again (I know my truths and I stand by them), you can use this slow cooker to, say, make three different types of mashed potatoes, three different types of buffalo chicken dip, or three different types of desserts. If anything, this is the perfect opportunity for you to throw a massive theme party all dedicated to one particular food, so you can taste test all of the recipes against each other once and for all (read: make a flimsy excuse to eat a lot of cheese on a Friday night instead of going outside and taking advantage of your youth). This Crock-Pot tower just opened a lot of doors for the would-be millennial entertainers of the world; just make sure you use this power deliciously and responsibly.