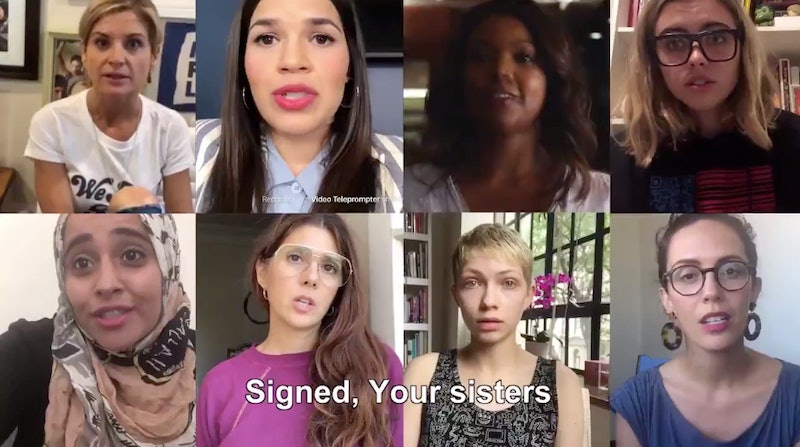 In a video circulating Twitter shared with the hashtag #WeBelieveYou, dozens of women showed support for Palo Alto professor Christine Blasey Ford. The video, titled #DearProfessorFord, shows celebrities, attorneys, and activists lauding Ford for speaking up about her allegation against SCOTUS nominee Brett Kavanaugh. Kavanaugh, who has categorically denied the allegation, has been called on by the Senate Judiciary Committee to appear at a hearing on Monday, as has Ford.

"Dear Professor Ford," the women in the video say, "we know how difficult it is to stand up to powerful people. We want to thank you for publicly sharing your story of sexual violence. As members of the Senate determine whether Supreme Court nominee Brett Kavanaugh should serve as a Supreme Court Justice, this context is critical."

The different figures in the video then refer to Ford's sexual assault allegation against Kavanaugh, saying that "the behavior you described was wrong and runs directly counter to upholding the law and promoting justice."

WBAL-TV reported that the video came from NDWA. Bustle has reached out to the organization for confirmation.

In the video, the participants emphasize that the SCOTUS nominee should not be confirmed. "We can also imagine how shocking and overwhelming it must have been to have your truths shared on a national stage without your permission," they add. "You should be the only decision maker about how your story is shared, if ever."

According to Ford's interview with The Washington Post published on Sept. 16, she did not initially plan to publicly come forward about Kavanaugh. In July, the professor contacted California Rep. Anna Eshoo and then wrote to California Sen. Dianne Feinstein, while requesting anonymity, about the alleged incident. She said she did so as it become obvious to her that Kavanaugh would be a SCOTUS nominee. She accused Kavanaugh of drunkenly and forcibly attempting to remove her clothes while they were teenagers at a party in Maryland.

Until late August, Ford had not gone public with her story. She reached out to The Post eventually, according to the interview, after she saw her story get inaccurately reported in some places. A day after she came forward, Kavanaugh issued a second denial. "I have never done anything like what the accuser describes — to her or to anyone," he said. "Because this never happened, I had no idea who was making this accusation until she identified herself yesterday."

At various points of the #DearProfessorFord video, the participants repeat their message for Ford, and conclude their clip by promising to stand in solidarity with her.

"We applaud your courage in coming forward for the public good, and we will be with you as you face the inevitable backlash," they said. "You are strong. And you are not alone. You are a survivor. Millions of us have your back. You and your testimony are credible. We believe you. Signed, your sisters."

More like this
Are John Legend & Kanye West Still Friends? The Singer’s Latest Update Is Candid
By Brad Witter
Beyoncé & Madonna’s “Break My Soul” Remix Honors A Group Of Black Icons
By Stephanie Topacio Long
Christina Aguilera Took A Powerful Stand At Brighton Pride
By Sam Ramsden
'Scream’s Courteney Cox Has Broken A Major Horror Record
By Sophie McEvoy
Get Even More From Bustle — Sign Up For The Newsletter