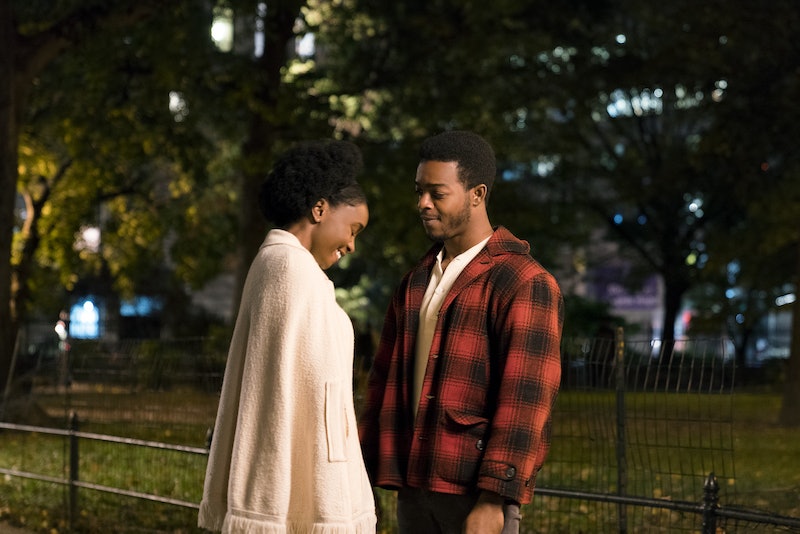 Barry Jenkins' If Beale Street Could Talk is a beautiful portrait of the kind of love that requires dedication, perseverance, and a trust that defies most traditional expectations of a relationship. Through flashbacks, we watch as Tish (KiKi Layne) fights for Fonny (Stephan James), her lifelong friend-turned-lover-turned-fiancee, as he sits in prison, accused of a crime he didn't commit. But what we see and what is so palpable is that Tish believes in Fonny and his innocence and will fight for him for as long as it takes. In a newly released deleted scene from If Beale Street Could Talk, though, we see that Fonny has always done the same for her.

Tish's parents (played by Colman Domingo and Best Supporting Actress Oscar winner Regina King) are equally supportive, and want to help Tish through her pregnancy while her future husband is behind bars, even when Fonny's own family is less enthused about the child being conceived out of wedlock. As Tish's mother Sharon, King delivers a heart-wrenching performance, traveling to Puerto Rico to confront Fonny's accuser (Emily Rios) in one of the film's most affecting scenes. Tish's entire family hopes to vindicate Fonny and to free him, and it's a powerful depiction of devotion.

While we get glimpses of Fonny's own love and obligation to protect Tish, a scene audiences didn't get to see in the theatrical cut of If Beale Street Could Talk furthers just how much Fonny was willing to fight for their relationship before he was wrongfully imprisoned. In the exclusive clip below, Fonny first reveals to Tish's family that he's asked Tish to marry him. She stands behind Fonny, nervously watching and waiting, as her mother does the same behind Tish's father.

"You're her father and I know you love her, but I know you know — you gotta know that I love her, too," Fonny says, his voice passionate with only a hint of waver out of what is surely nerves. "I've loved her my whole life, and if I didn't love her, I wouldn't be standing her in this room right now, would I?" He keeps talking, nervously, but affirms that he loves Tish: "That's all I can say."

Tish's father, Joseph, poses practical questions: "How old are you? ... You think that's old enough to get married?" Then: "How are you gonna feed her? ... You got a job?" Fonny answers them all honestly, saying "We both know it won't be easy." Joseph and Sharon, whose eyebrow raise toward her husband indicate they're sharing the same thoughts and questions, aren't looking to keep Tish and Fonny apart, however. In the spirit of the film, though, they know how trying marriage can be; how hard it is to make a living and to keep food on the table to maintain any sort of happy, healthy relationship in a world that, especially in the early 1970s, was so unkind to black people, a prophecy that comes to fruition in Beale Street in so many ways.

Early on in the film Tish and Fonny struggle to find a place to live because of racism, then Tish is harassed and Fonny comes close to being arrested for coming to her aid. Then that same white cop who lets Fonny go the first time returns to place him at the scene of a rape, delivering a condemning testimony; a ruthless, racially-motivated lie that alters their lives but tells a story of how strong they are, and how enduring not only their love, but Tish's family's love, is. What Joseph asks Fonny in the deleted clip is not just about how he'll provide for himself and his daughter, but how he will help to sustain them both in a cold world set up to tear them down. Joseph wants Fonny to be aware of what that responsibility looks like; to be prepared for the injustices they will undoubtedly face in the future.