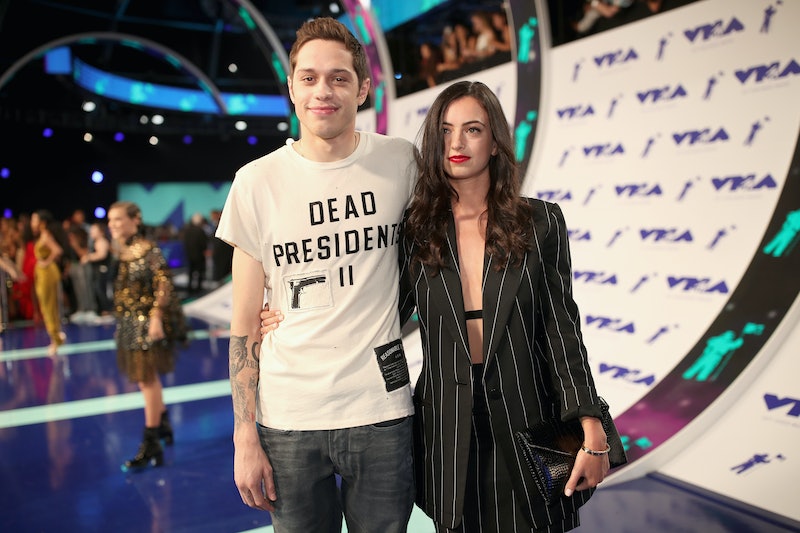 In the last few weeks, fans have gone all sorts of wild trying to figure out when Ariana Grande and Pete Davidson started dating. There's even a conspiracy theory about their dating timeline floating around on the internet. According to the theory, Davidson was possibly seeing Grande before he and Cazzie David actually broke up. But according to a new report by TMZ, and in the words of Ross Geller, Davidson and David were reportedly on a break. (Bustle reached out to David and Davidson's reps for comment, but did not hear back at the time of publication.)

In short, social media posts suggest that Grande and Davidson were together on May 13, when this photo was taken. However, just days prior on May 3, David posted a photo of herself and Davidson captioned "Bffs." Their breakup was announced May 17, just a few days after Davidson and Grande were spending time together. It's all very suspect, especially since Grande and Davidson were pretty private about their relationship until their reported engagement announcement.

But as TMZ reports, sources close to the couple say that Davidson and David were "on a break" in early May, though not broken up entirely, when his romance with Grande started. Additionally, the sources claim the two hit it off quickly and were ready and eager to move on from their respective breakups (Grande previously ended her relationship with Mac Miller) with each other. Although, fans probably didn't need source intel to figure that one out.

Although David has yet to comment on the engagement, she doesn't seem at all bothered by it and has been living her best life, at least on social media. After the engagement was announced on June 11, TMZ also claimed that David wasn't hung up on what happened and was ready to move on, according to sources. She took a trip to Africa with friends and when she returned, hilariously wrote, "Been in Africa, what'd I miss ??" on an Instagram post she shared June 1. On the same day the engagement was announced, David posted a selfie of herself with wine, writing, "Came to wine country a person, leaving a human bottle of wine." Relatable on every level.

Davidson was the one who revealed the breakup on May 17, during an interview with Complex. "We're not together anymore. Very talented girl, she'll be great and she'll be fine," he said. "Yeah, I think she'll be okay.” Ironically, both Davidson and David are 24, as is Grande. And, Davidson and David met through SNL when David's famous dad, Larry, hosted in 2015, according to Complex. Fans have noted Grande's night of hosting the show in 2016 could be the first time she and Davidson met as well.

Davidson and David reportedly dated for about two years. In a 2017 interview with Entertainment Tonight, the SNL actor gushed about his then girlfriend, saying, "She's the most beautiful girl in the world. Look how lucky I am! She's so smart. She is a very, very wonderful lady." He was also open about how she'd helped him work through sobriety issues and stay focused.

While David has been super low-key about her ex's whirlwind romance, Davidson's other ex, Carly Aquilino, has been a bit more vocal. Amidst the engagement news, the Girl Code star posted a hilarious screenshot of a text exchange she had to her Instagram story. A friend wrote to her, "I know I'm the 9 billionth person to text you today about this, but… I can't." The comedian responded back, “HAHHAHAHAAH.” The post was captioned, “My day in a text message.”

Both of Davidson's exes are handling the situation brilliantly, in my opinion, and if they decide to join forces and hang out sometime soon, let's pray they document it on social media.