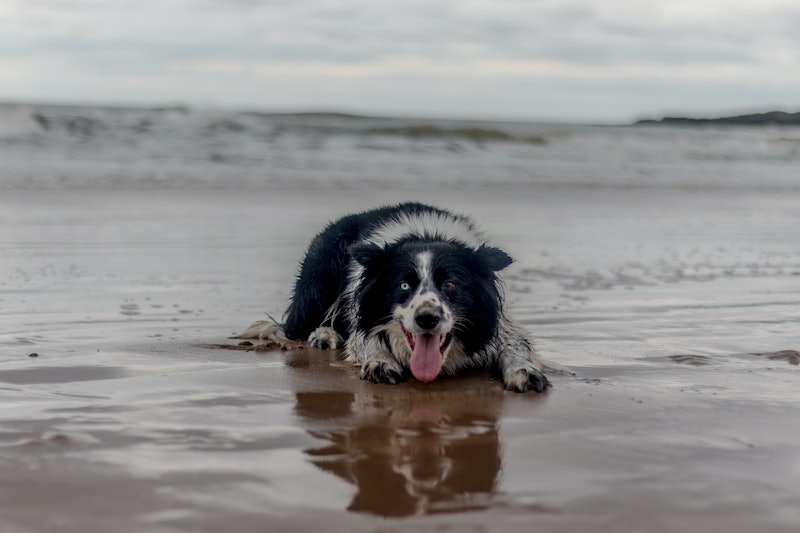 As the old adage goes, "a dog is a man's best friend". Well it's 2019 so we had better get with the programme and fess up that, "a dog is a person's best friend". Hell yes. Dogs love you despite who you are, what you do, what you earn, and especially not your gender. There literally couldn't be a more loyal friend nor, as this lucky woman found out, one as dedicated to your safety. Pita Oates, a runner, was saved by her dogs after falling while out in remote moorland.

The BBC reports that it was on a 3-mile run in rural Lancashire with her adorable AF blue collies, Merlyn and Buddy, that disaster struck. After a very nasty fall on Great Hill near Chorley on March 12, Oates found herself unable to walk and in a seriously precarious situation. A situation made even more precarious by the fact that she had left her phone in her camper van. And, on top of that, the weather was horrific.

"It was the tail-end of Storm Gareth, it was freezing and I was soaking wet," Oates told the BBC. "The winds were horrendous."

However, her pups, proving they are as smart as they are cute, worked tirelessly together to get help for their owner. No, shut up, you're crying.

"They were like a tag team," Oates told the BBC, "Buddy never left me while Merlyn went for help. I would have died without a doubt, I wouldn't have lasted the night."

Unable to even stand, Oates had to try another way of getting down the hill she was on.

"I couldn't stand up, I was having to bum-shuffle all the way down," she told the BBC. "Every time my leg touched the ground I was in pain so I rigged up a sling using the dog's lead to keep my leg up."

During the whole ordeal one dog, Buddy, stayed with her as the other, Merlyn, ran around barking desperately for help. They appeared to be communicating with each other, barking back and forth. And, proving that team work makes the actual dream work, Merlyn's barking paid off. One man who was out walking his dog knew there was something strange about the distressed dog. When he followed the dog he found Oates, who was at this point suffering early stages of hypothermia and drifting in and out of consciousness, the BBC states.

The man alerted the authorities, and with the help of paramedics, Bolron Mountain Rescue, and the Bowland Mountain Rescue Team, Oates was brought to the nearest hospital and her injuries were treated. As if the hypothermia wasn't enough, it transpired that she hadn't just pulled a muscle or something minor like that. No, y'all, she had really stacked it. As the BBC reports, she actually broke the femur behind her left knee as well as tearing her anterior and cruciate ligaments. Which is a lot of medical words for "ouch."

Oates has already had a titanium plate fitted, but she will need another operation in the future. Thankfully, however, after an eight-day hospital stay, Oates is on the mend and back home with her adorable furry babies.

More like this
'Waterloo Road' Is Back, With More Than A Few Familiar Faces
By Sam Ramsden and Vivian Iroanya
Mollie King & Stuart Broad Just Shared The First Pic Of Their Baby
By Sophie McEvoy
Joe Lycett Just Took HIs David Beckham Qatar Protest To A Whole New Level
By Sophie McEvoy
Looks Like Jack Grealish Found The Sandy To His Danny
By Sophie McEvoy
Get The Very Best Of Bustle/UK